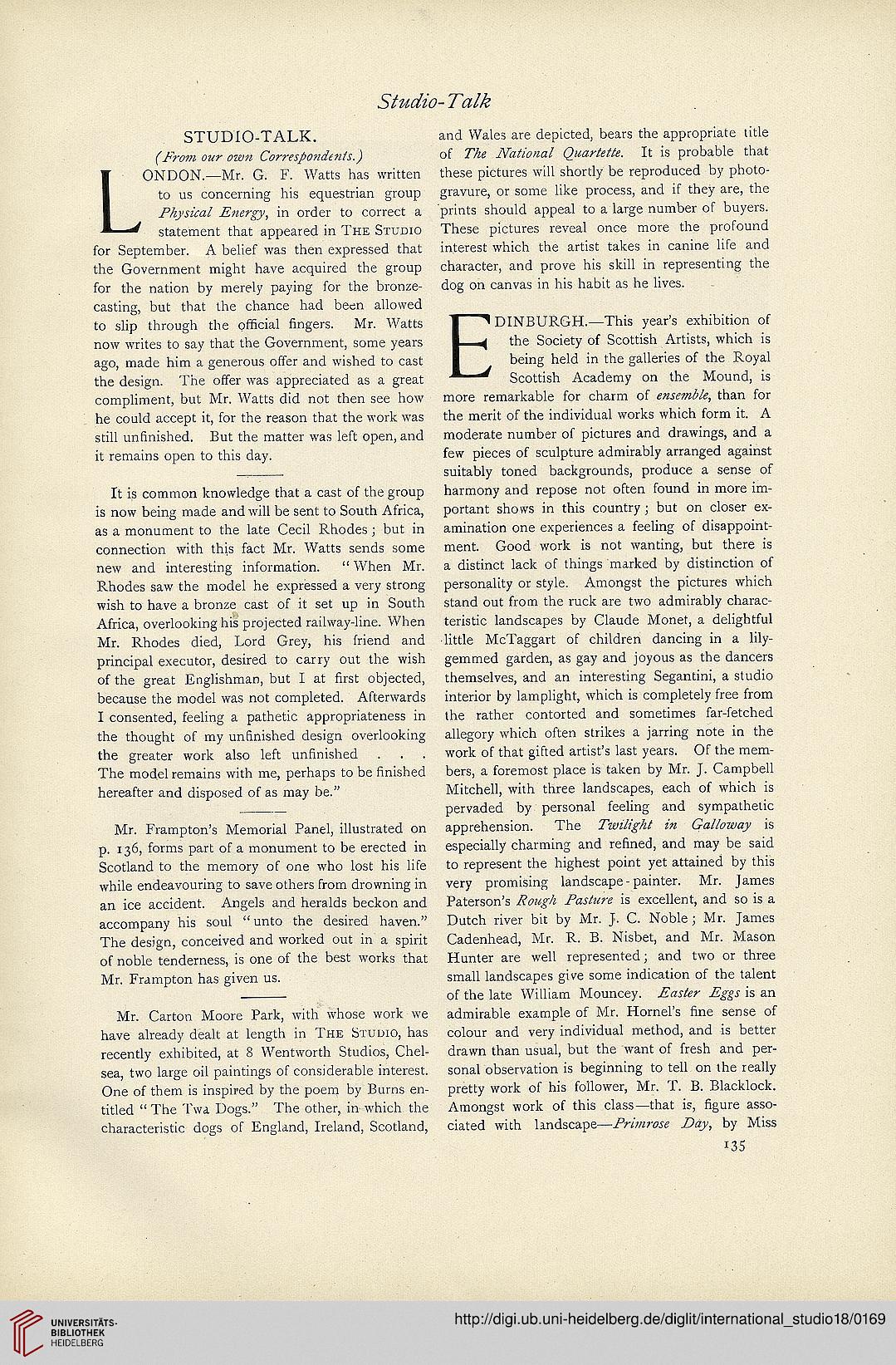 STUDiO-TALK.
A7V777 <?K7* z/zr/77 G<?7*7*7'^<7777/777A.J
ONDON.—Mr. G. F. Watts has written
to us concerning his equestrian group
7%y.H'<r<z/ ^77^7^y, in order to correct a
statement that appeared in THE STUDio
for September. A belief was then expressed that
the Government might have acquired the group
for the nation by merely paying for the bronze-
casting, but that the chance had been aliowed
to siip through the ofHcial hngers. Mr. Watts
now writes to say that the Government, some years
ago, made him a generous offer and wished to cast
the design. Tne offer was appreciated as a great
compliment, but Mr. Watts did not then see how
he couid accept it, for the reason that the work was
stiii unfinished. But the matter was left open, and
it remains open to this day.
It is common knowiedge that a cast of the group
is now being made and wiii be sent to South Africa,
as a monument to the iate Cecil Rhodes ; but in
connection with this fact Mr. Watts sends some
new and interesting information. " When Mr.
Rhodes saw the model he expressed a very strong
wish to have a bronze cast of it set up in South
Africa, overlooking his projected railway-line. When
Mr. Rhodes died, Lord Grey, his friend and
principal executor, desired to carry out the wish
of the great Engtishman, but I at first objected,
because the modei was not compieted. Afterwards
I consented, feeling a pathetic appropriateness in
the thought of my unhnished design overlooking
the greater work also left unfmished
The model remains with me, perhaps to be hnished
hereafter and disposed of as may be."

Mr. Frampton's Memorial Panel, illustrated on
p. 136, forms part of a monument to be erected in
Scotland to the memory of one who lost his life
while endeavouring to save others from drowning in
an ice accident. Angels and heralds beckon and
accompany his soul "unto the desired haven."
The design, conceived and worked out in a spirit
of noble tenderness, is one of the best works that
Mr. Frampton has given us.
Mr. Carton Moore Park, with whose work we
have already dealt at length in THE StUDio, has
recently exhibited, at 8 Wentworth Studios, Chel-
sea, two large oil paintings of considerable interest.
One of them is inspired by the poem by Burns en-
titled " The Twa Dogs." The other, in which the
characteristic dogs of England, Ireland, Scotland,

and Wales are depicted, bears the appropriate title
of 71%g WhTVc/za/ (^T/aT'A/z'TL It is probable that
these pictures witl shortly be reproduced by photo-
gravure, or some like process, and if they are, the
prints should appeal to a large number of buyers.
These pictures reveal once more the profound
interest which the artist takes in canine life and
character, and prove his skill in representing the
dog on canvas in his habit as he lives.
H ^ DINBURGH.—This year's exhibition of
) ^ the Society of Scottish Artists, which is
being held in the galleries of the Royal
^ Scottish Academy on the Mound, is
more remarkable for charm of fTZjfZTzM?, than for
the merit of the individual works which form it. A
moderate number of pictures and drawings, and a
few pieces of sculpture admirably arranged against
suitably toned backgrounds, produce a sense of
harmony and repose not often found in more im-
portant shows in this country ; but on closer ex-
amination one experiences a feeling of disappoint-
ment. Good work is not wanting, but there is
a distinct lack of things marked by distinction of
personality or style. Amongst the pictures which
stand out from the ruck are two admirably charac-
teristic landscapes by Claude Monet, a delightful
little McTaggart of children dancing in a lily-
gemmed garden, as gay and joyous as the dancers
themselves, and an interesting Segantini, a studio
interior by lamplight, which is completely free from
the rather contorted and sometimes far-fetched
allegory which often strikes a jarring note in the
work of that gifted artist's last years. Of the mem-
bers, a foremost place is taken by Mr. J. Campbell
Mitchell, with three landscapes, each of which is
pervaded by personal feeling and sympathetic
apprehension. The Twz/z^/ z'77 Ca/z'zzK/ay is
especially charming and rehned, and may be said
to represent the highest point yet attained by this
very promising landscape-painter. Mr. James
Paterson's 7?z//7^ Aj/7Z7*z; is excellent, and so is a
Dutch river bit by Mr. J. C. Noble; Mr. James
Cadenhead, Mr. R. B. Nisbet, and Mr. Mason
Hunter are well represented; and two or three
small landscapes give some indication of the talent
of the late William Mouncey. 7?<M/F7' is an
admirable example of Mr. Hornel's hne sense of
colour and very individual method, and is better
drawn than usual, but the want of fresh and per-
sonal observation is beginning to tell on the really
pretty work of his foilower, Mr. T. B. Blacklock.
Amongst work of this class—that is, hgure asso-
ciated with landscape—Alw/zzwg by Miss
i3S