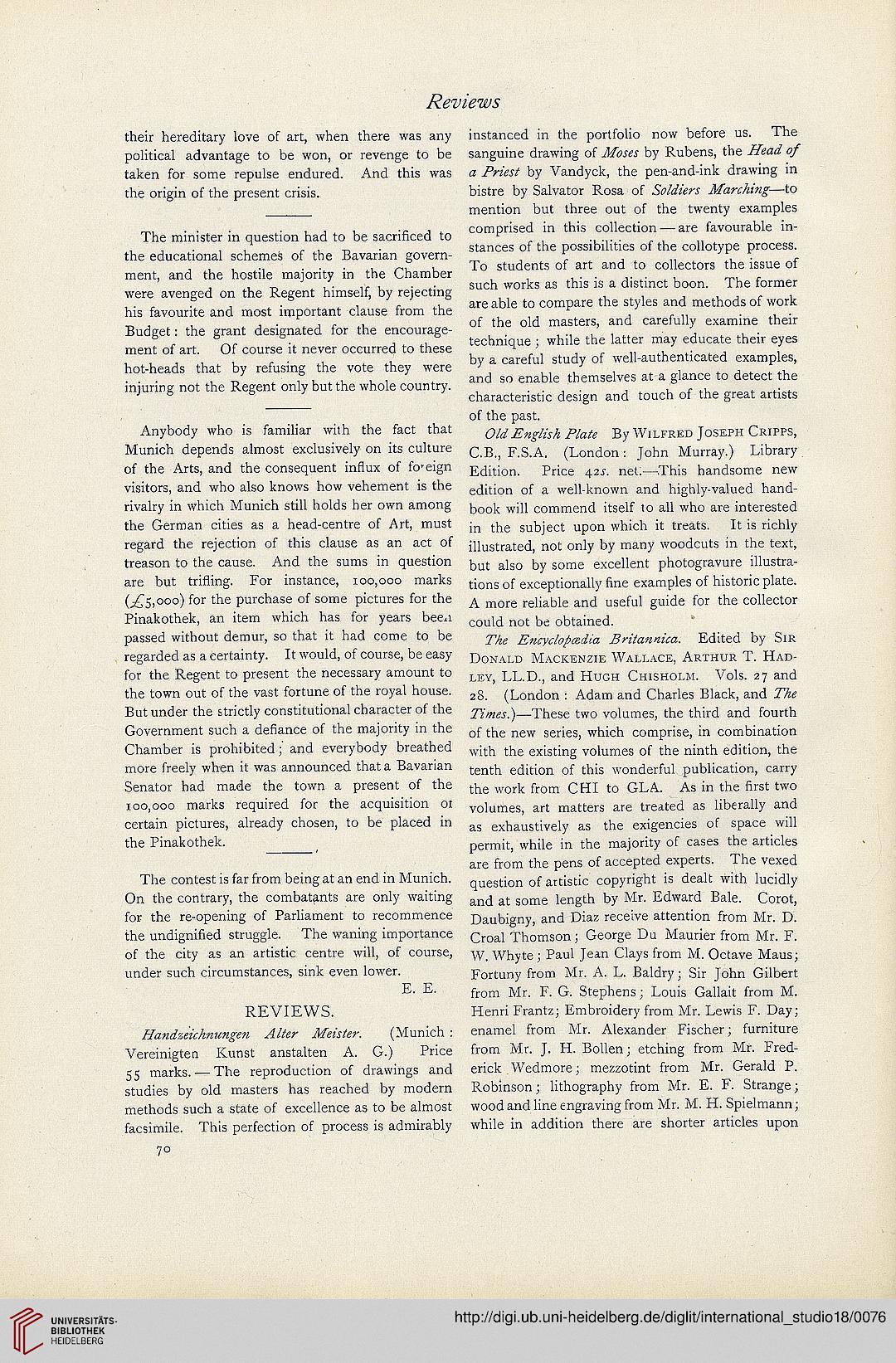 their hereditary love of art, when there was any
poiitical advantage to be won, or revenge to be
taken for some repulse endured. And this was
the origin of the present crisis.

The minister in question had to be sacrihced to
the educational schemes of the Bavarian govern-
ment, and the hostiie majority in the Chamber
were avenged on the Regent himseif, by rejecting
his favourite and most important clause from the
Budget: the grant designated for the encourage-
ment of art. Of course it never occurred to these
hot-heads that by refusing the vote they were
injuring not the Regent only but the whole country.

Anybody who is famiiiar with the fact that
Munich depends almost exclusiveiy on its cuiture
of the Arts, and the consequent infiux of fo'eign
visitors, and who aiso ltnows how vehement is the
rivairy in which Munich stiii holds her own among
the German cities as a head-centre of Art, must
regard the rejection of this ciause as an act of
treason to the cause. And the sums in question
are but trihing. For instance, 100,000 marks
(^Jg,ooo) for the purchase of some pictures for the
Pinakothek, an item which has for years been
passed without demur, so that it had come to be
regarded as a certainty. It would, of course, be easy
for the Regent to present the necessary amount to
the town out of the vast fortune of the royal house.
But under the strictly constitutionai character of the
Government such a defiance of the majority in the
Chamber is prohibited; and everybody breathed
more freeiy when it was announced that a Bavarian
Senator had made the town a present of the
100,000 marks required for the acquisition ot
certain pictures, already chosen, to be piaced in
the Pinakothek.

The contest is far from being at an end in Munich.
On the contrary, the combatants are oniy waiting
for the re-opening of Pariiament to recommence
the undignified struggie. The waning importance
of the city as an artistic centre wiil, of course,
under such circumstances, sink even iower.
E. E.
REVIEWS.
H/^7* A/i:A^7-. (Munich :
Vereinigten Kunst anstaiten A. G.) Price
55 marks. — The reproduction of drawings and
studies by oid masters has reached by modern
methods such a state of excelience as to be aimost
facsimiie. This perfection of process is admirabiy
70

instanced in the portfolio now before us. The
sanguine drawing of A/twj by Rubens, the ^
<z V7*f<?V by Vandyck, the pen-and-ink drawing in
bistre by Salvator Rosa of -Sh/ifftw —to
mention but three out of the twenty examples
comprised in this coilection — are favourable in-
stances of the possibiiities of the coiiotype process.
To students of art and to coilectors the issue of
such works as this is a distinct boon. The former
are able to compare the styies and methods of work
of the oid masters, and carefuily examine their
technique ; while the latter may educate their eyes
by a carefui study of weli-authenticated examples,
and so enable themseives at a glance to detect the
characteristic design and touch of the great artists
of the past.
VYa/F By WlLFRED JOSEPH CRIPPS,
C.B., F.S.A. (London: John Murray.) Library
Edition. Price 42.L net.—This handsome new
edition of a well-known and highly-valued hand-
book will commend itself to all who are interested
in the subject upon which it treats. It is richly
iHustrated, not only by many woodcuts in the text,
but also by some excellent photogravure illustra-
tions of exceptionally hne examples of historic plate.
A more reliable and useful guide for the collector
could not be obtained.
.Z?73<ry<r/^<s<A'<3 Edited by SiR
DONALD MACKENZIE WALLACE, ARTHUR T. H.AD-
LEv, LL.D., and HuGH CHiSHOLM. Vols. 27 and
28. (London : Adam and Charles Black, and
TTwM.)—These two volumes, the third and fourth
of the new series, which comprise, in combination
with the existing volumes of the ninth edition, the
tenth edition of this wonderful publication, carry
the work from CHI to GLA. As in the Hrst two
volumes, art matters are treated as liberally and
as exhaustively as the exigencies of space will
permit, while in the majority of cases the articles
are from the pens of accepted experts. The vexed
question of artistic copyright is dealt with lucidly
and at some length by Mr. Edward Bale. Corot,
Daubigny, and Diaz receive attention from Mr. D.
Croal Thomson; George Du Maurier from Mr. F.
W. Whyte; Paul Jean Clays from M. Octave Maus;
Fortuny from Mr. A. L. Baldry; Sir John Gilbert
from Mr. F. G. Stephens; Louis Gallait from M.
Henri Frantz; Embroidery from Mr. Lewis F. Day;
enamel from Mr. Alexander Fischer; furniture
from Mr. J. H. BoIIen; etching frorn Mr. Fred-
erick Wedmore; mezzotint from Mr. Gerald P.
Robinson; lithography from Mr. E. F. Strange;
wood and line engraving from Mr. M. H. Spielmann;
while in addition there are shorter articles upon