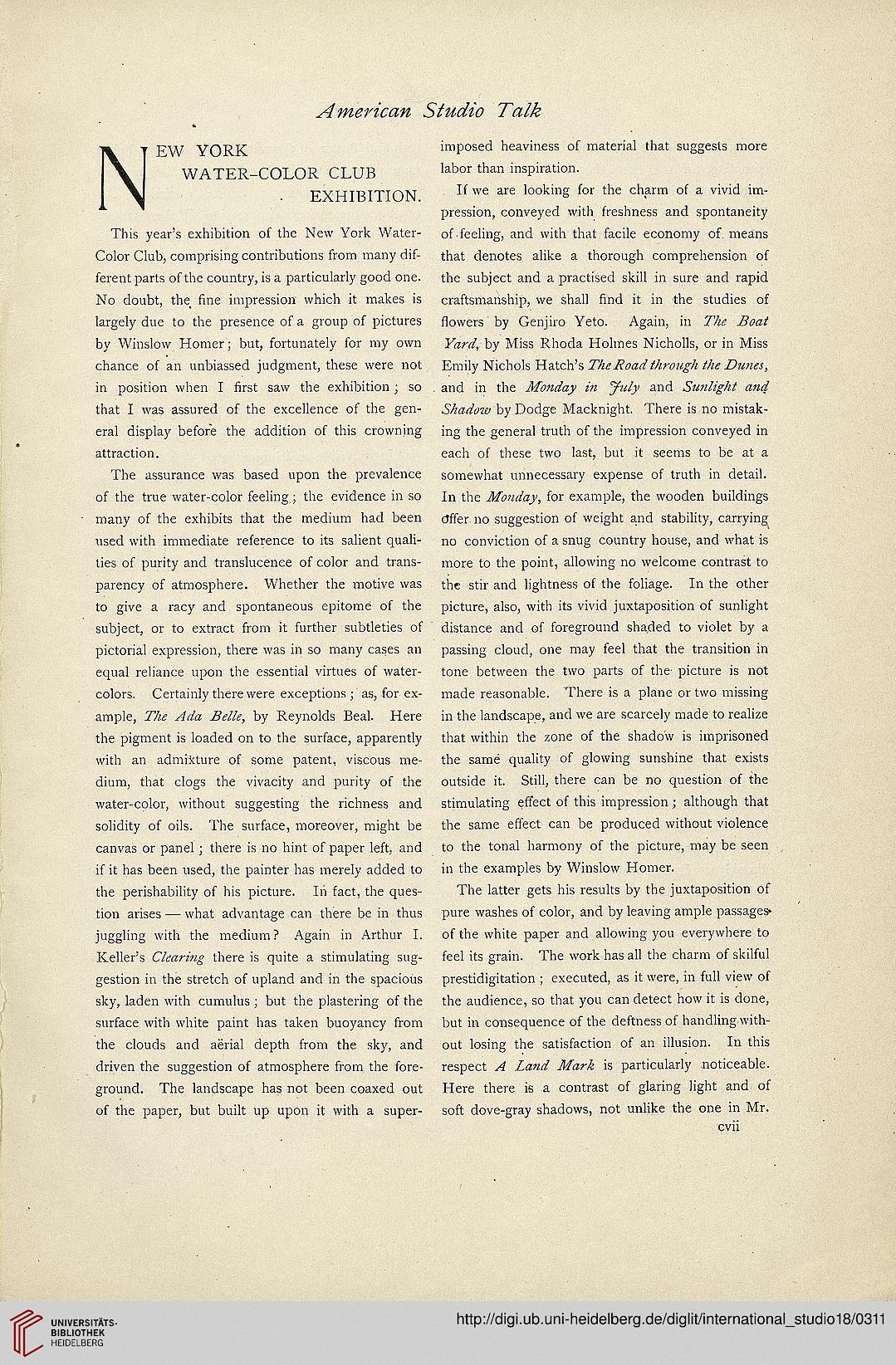 Tt 7EW YORK
\ WATER-COLOR CLUB
\ EXHIBITION.
This year's exhibition of the New York Water-
Color Club, comprising contributions from many dif-
ferent parts of the country, is a particuiariy good one.
No doubt, the fine impression which it makes is
iargely due to the presence of a group of pictures
by Winslow Homer ; but, fortunately for my own
chance of an unbiassed judgment, these were not
in position when I first saw the exhibition; so
that I was assured of the excellence of the gen-
eral display before the addition of this crownjng
attraction.
The assurance was based upon the prevalence
of the true water-color feeling; the evidence in so
many of the exhibits that the medium had been
used with immediate reference to its salient quali-
ties of purity and translucence of color and trans-
parency of atmosphere. Whether the motive was
to give a racy and spontaneous epitome of the
subject, or to extract from it further subtleties of
pictorial expression, there was in so many cases an
equal reliance upon the essential virtues of water-
colors. Certainly therewere exceptions ; as, for ex-
ample, by Reynolds Beal. Here
the pigment is loaded on to the surface, apparently
with an admixture of some patent, viscous me-
dium, that clogs the vivacity and purity of the
water-color, without suggesting the richness and
solidity of oils. The surface, moreover, might be
canvas or panel; there is no hint of paper left, and
if it has been used, the painter has merely added to
the perishability of his picture. In fact, the ques-
tion arises — what advantage can there be in thus
juggling with the medium? Again in Arthur I.
Keller's there is quite a stimulating sug-
gestion in the stretch of upland and in the spacious
sky, laden with cumulus; but the plastering of the
surface with white paint has taken buoyancy from
the clouds and aerial depth from the sky, and
driven the suggestion of atmosphere from the fore-
ground. The landscape has not been coaxed out
of the paper, but built up upon it with a super-

imposed heaviness of material that suggests more
labor than inspiration.
If we are looking for the charm of a vivid im-
pression, conveyed with freshness and spontaneity
of feeling, and with that facile economy of means
that denotes alike a thorough comprehension of
the subject and a practised skill in sure and rapid
craftsmanship, we shall find it in the studies of
flowers by Genjiro Yeto. Again, in 7%^ Y?<7<!/
%?-7, by Miss Rhoda Hohnes NichoIIs, or in Miss
Emily Nichols Hatch's Y%^A'<7<r</
and in the 777 and ^7777/7^/ <2774?
<Y%%</(7w by Dodge Macknight. There is no mistak-
ing the general truth of the impression conveyed in
each of these two Iast, but it seems to be at a
somewhat unnecessary expense of truth in detail.
In the dAw/aj', for example, the wooden buildings
dffer 110 suggestion of weight and stability, carrying
no conviction of a snug country house, and what is
more to the point, allowing no welcome contrast to
the stir and lightness of the foliage. In the other
picture, also, with its vivid juxtaposition of sunlight
distance and of foreground shaded to violet by a
passing cloud, one may feel that the transition in
tone between the two parts of the picture is not
made reasonable. There is a plane or two missing
in the landscape, and we are scarcely made to realize
that within the zone of the shadow is itnprisoned
the same quality of glowing sunshine that exists
outside it. Still, there can be no question of the
stimulating effect of this impression ; although that
the same effect can be produced without violence
to the tonal harmony of the picture, may be seen
in the examples by Winslow Homer.
The latter gets his results by the juxtaposition of
pure washes of color, and by leaving ample passages-
of the white paper and allowing you everywhere to
feel its grain. The work has all the charm of skilful
prestidigitation ; executed, as it were, in full view of
the audience, so that you can detect how it is done,
but in consequence of the deftness of handling with-
outlosingthesatisfactionofanillusion. Inthis
respect ^4 Z%77</ ^7-^ is particularly noticeable.
Here there is a contrast of glaring iight and of
soft dove-gray shadows, not unlike the one in Mr.
cvii