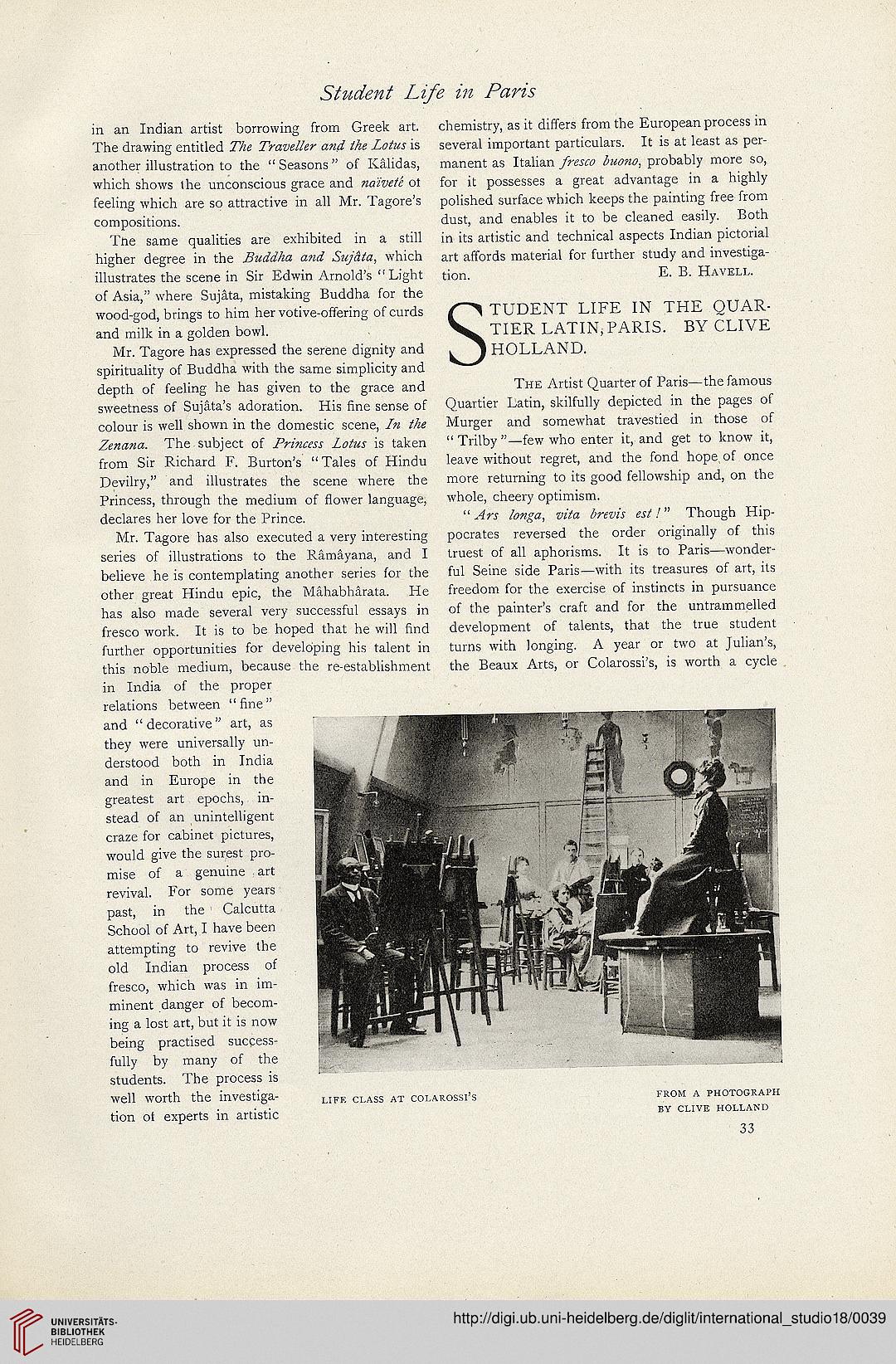 in an Indian artist borrowing from Greek art.
The drawing entitled Z%« TTaw&r <z%f ^ is
another iiiustration to the " Seasons " of Kalidas,
which shows Ihe unconscious grace and MafwA? ot
feeling which are so attractive in all Mr. Tagore's
compositions.
Tiie same qualities are exhibited in a still
higher degree in the 7?%<&iM<z <Z72<? which
illustrates the scene in Sir Edwin Arnold's "Light
of Asia," where Sujata, mistaking Buddha for the
wood-god, brings to him her votive-offering of curds
and milk in a golden bowl.
Mr. Tagore has expressed the serene dignity and
spirituality of Buddha with the same simplicity and
depth of feeling he has given to the grace and
sweetness of Sujata's adoration. His Hne sense of
colour is well shown in the domestic scene, Z77 ^
,?g7M7z<z. The subject of TYr'wFM Z<?^y is taken
from Sir Richard F. Burton's " Tales of Hindu
Devilry," and iilustrates the scene where the
Princess, through the medium of Hower language,
declares her love for the Prince.
Mr. Tagore has also executed a very interesting
series of illustrations to the Ramayana, and I
believe he is contemplating another series for the
other great Hindu epic, the Mahabharata. He
has also made several very successful essays in
fresco work. It is to be hoped that he wiH Hnd
further opportunities for developing his talent in
this noble medium, because the re-establishment
in India of the proper
relations between "Hne"
and "decorative" art, as
they were universally un-
derstood both in India
and in Europe in the
greatest art epochs, in-
stead of an unintelligent
craze for cabinet pictures,
would give the surest pro-
mise of a genuine art
revival. For some years
past, in the Calcutta
School of Art, I have been
attempting to revive the
old Indian process of
fresco, which was in im-
minent danger of becom-
ing a lost art, but it is now
being practised success-
fully by many of the
students. The process is
well worth the investiga-
tion of experts in artistic

chemistry, as it differs from the European process in
several important particulars. It is at least as per-
manent as Italian yiwrc <5aw72<?, probably more so,
for it possesses a great advantage in a highly
polished surface which keeps the painting free from
dust, and enables it to be cleaned easily. Both
in its artistic and technical aspects Indian pictorial
art affords material for further study and investiga-
tion. E. B. HAVELL.
TUDENT LIFE IN THE QUAR-
TIER LATIN, PARIS. BY CLIVE
, J HOLLAND.
THE Artist Quarter of Paris—the farnous
Quartier Latin, skilfully depicted in the pages of
Murger and somewhat travestied in those of
" Trilby "—few who enter it, and get to know it,
leave without regret, and the fond hope of once
more returning to its good fellowship and, on the
whole, cheery optimism.
" H7*^ wYa <%7vzv'.s' /" Though Hip-
pocrates reversed the order originally of this
truest of all aphorisms. It is to Paris—wonder-
ful Seine side Paris—with its treasures of art, its
freedom for the exercise of instincts in pursuance
of the painter's craft and for the untrammelled
development of talents, that the true student
turns with longing. A year or two at Julian's,
the Beaux Arts, or Colarossi's, is worth a cycle


LtFK CLASS AT COLAROSSt's FROM A PHOTOGRAPH
BY CHVE HOLLAND