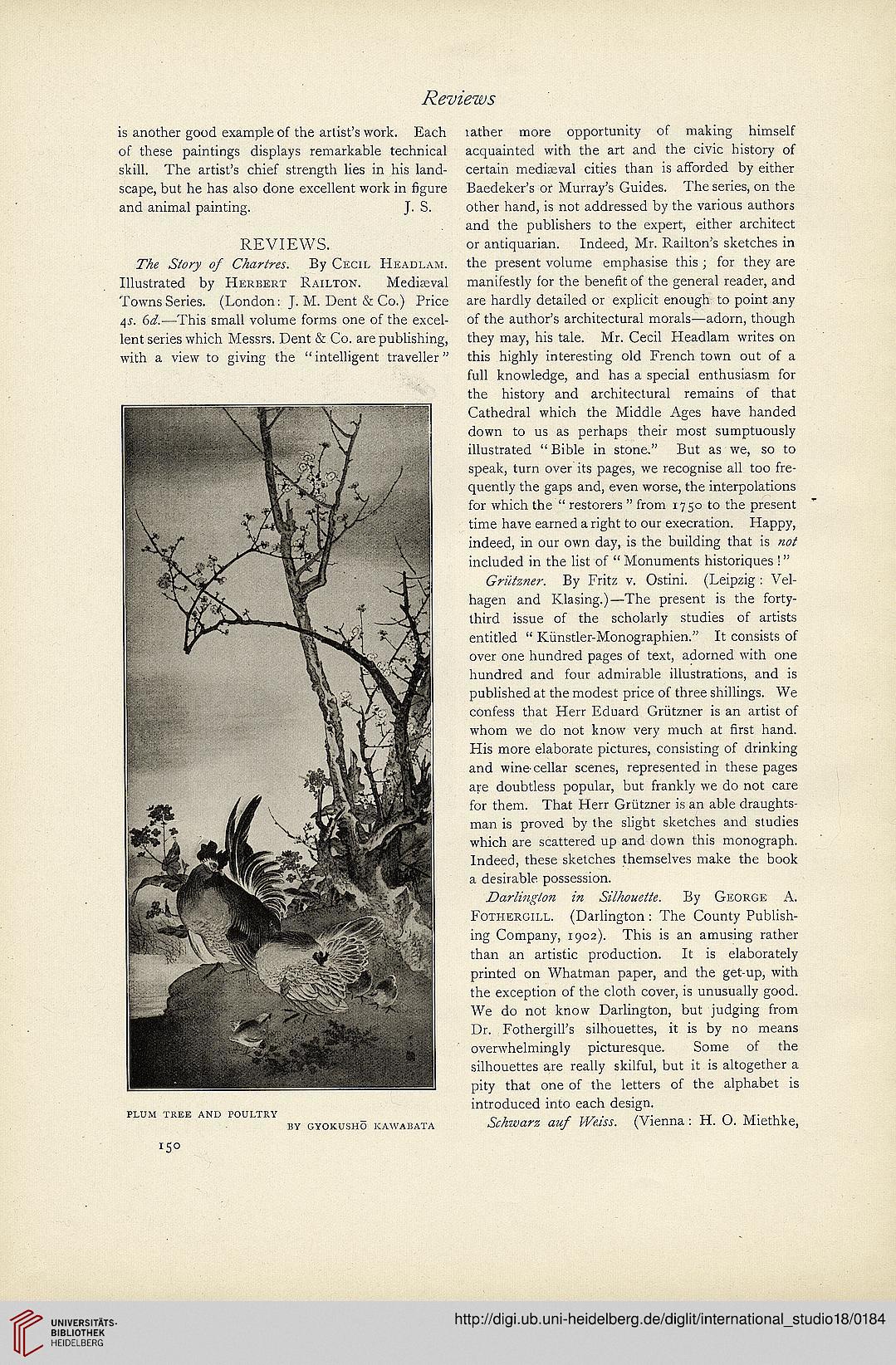 is another good example of the artist's work. Each
of these paintings displays remarkable technical
skill. The artist's chief strength lies in his land-
scape, but he has also done excellent work in hgure
and animal painting. J. S.
REVIEWS.
2% C^<!7*2'7'M. By CECIL HEADLAM.
Illustrated by HEKUERT RAILTON. Mediieval
TownsSeries. (London: J. M. Dent&Co.) Price
4r. 6<f.—This small volume forms one of the excel-
lent series which Messrs. Dent & Co. are publishing,
with a view to giving the " intelligent traveller"

iather more opportunity of making himself
acquainted with the art and the civic history of
certain mediteval cities than is afforded by either
Baedeker's or Murray's Guides. The series, on the
other hand, is not addressed by the various authors
and the publishers to the expert, either architect
or antiquarian. Indeed, Mr. Railton's sketches in
the present volume emphasise this ; for they are
manifestly for the beneht of the general reader, and
are hardly detailed or explicit enough to point any
of the author's architectural morals—adorn, though
they may, his tale. Mr. Cecil Headlam writes on
this highly interesting old French town out of a
full knowledge, and has a special enthusiasm for
the history and architectural remains of that
Cathedral which the Middle Ages have handed
down to us as perhaps their most sumptuously
illustrated "Bible in stone." But as we, so to
speak, turn over its pages, we recognise all too fre-
quently the gaps and, even worse, the interpolations
for which the " restorers " from 1750 to the present
time have earned a right to our execration. Happy,
indeed, in our own day, is the building that is
included in the list of " Monuments historiques !"
(yw&Tzc?'. By Fritz v. Ostini. (Leipzig : Vel-
hagen and Klasing.)—The present is the forty-
third issue of the scholarly studies of artists
entitled " K.iinstIer-Monographien." It consists of
over one hundred pages of text, adorned with one
hundred and four admirable iHustrations, and is
published at the modest price of three shiHings. We
confess that Herr Eduard Griitzner is an artist of
whom we do not know very much at first hand.
His more elaborate pictures, consisting of drinking
and wine cellar scenes, represented in these pages
are doubtless popular, but frankly we do not care
for them. That Herr Griitzner is an able draughts-
man is proved by the slight sketches and studies
which are scattered up and down this monograph.
Indeed, these sketches themselves make the book
a desirable possession.
Z<a7V;'72,g*/(772 272 ,$27,%(722C2%. By GEORGE A.
FoTHERGiLL. (Darlington : The County Publish-
ing Company, 1902). This is an amusing rather
than an artistic production. It is elaborately
printed on Whatman paper, and the get-up, with
the exception of the cloth cover, is unusually good.
We do not know Darlington, but judging from
Dr. Fothergill's silhouettes, it is by no means
overwhelmingly picturesque. Some of the
silhouettes are really skilful, but it is altogether a
pity that one of the letters of the alphabet is
introduced into each design.
,Sb%w<z7-z aTT/" ILgAr. (Vienna: H. O. Miethke,