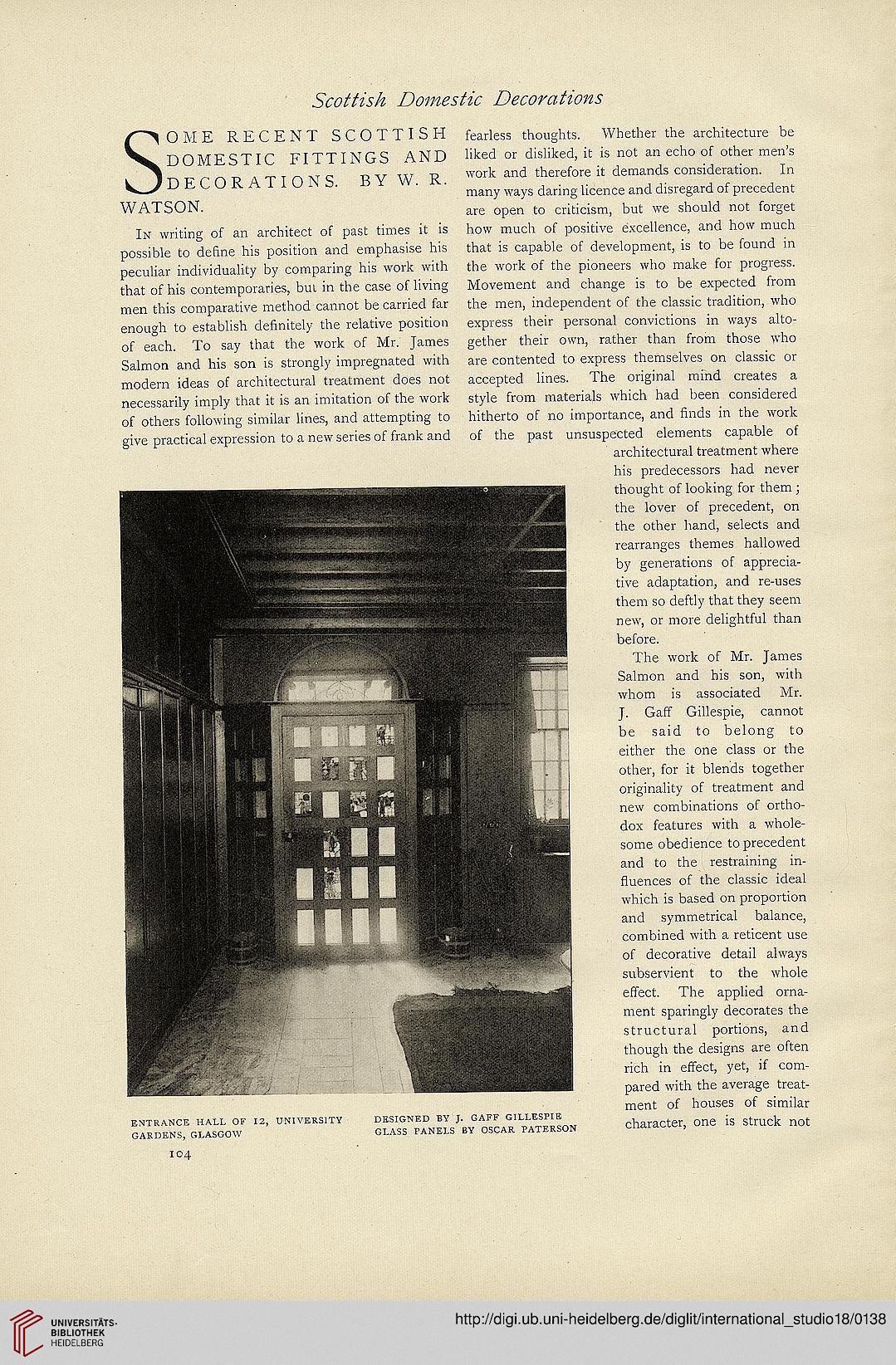 
OME RECENT SCOTTISH
^^DOMESTIC FITTINGS AND
^J/DECORATIONS. BY W. R.
WATSON.
iNwritingofanarchitectofpasttimesitis
possible to define his position and emphasise his
pecuiiar individuality by comparing his work with
that of his contemporaries, but in the case of living
men this comparative method cannot be carried far
enough to establish dehnitely the relative position
of each. To say that the work of Mr. James
Salmon and his son is strongly impregnated with
modern ideas of architectural treatment does not
necessarily imply that it is an imitation of the work
of others following similar lines, and attempting to
give practical expression to a new series of frank and

fearless thoughts. Whether the architecture be
liked or disliked, it is not an echo of other men's
work and therefore it demands consideration. In
many ways daring licence and disregard of precedent
are open to criticism, but we should not forget
how much of positive excellence, and how much
that is capable of development, is to be found in
the work of the pioneers who make for progress.
Movement and change is to be expected from
the men, independent of the classic tradition, who
express their personal convictions in ways alto-
gether their own, rather than from those who
are contented to express themselves on classic or
accepted lines. The original mind creates a
style from materials which had been considered
hitherto of no importance, and hnds in the work
of the past unsuspected elements capable of
architectural treatment where
his predecessors had never
thought of looking for them ;
the lover of precedent, on
the other hand, selects and
rearranges themes hallowed
by generations of apprecia-
tive adaptation, and re-uses
them so deftly that they seem
new, or more delightful than
before.
The work of Mr. James
Salmon and his son, with
whom is associated Mr.
J. Gaff Gillespie, cannot
be said to belong to
either the one class or the
other, for it blends together
originality of treatment and
new combinations of ortho-
dox features with a whole-
some obedience to precedent
and to the restraining in-
Huences of the classic ideal
which is based on proportion
and symmetrical balance,
combined with a reticent use
of decorative detail always
subservient to the whole
effect. The applied orna-
ment sparingly decorates the
structural portions, and
though the designs are often
rich in efTect, yet, if com-
pared with the average treat-
ment of houses of similar
character, one is struck not