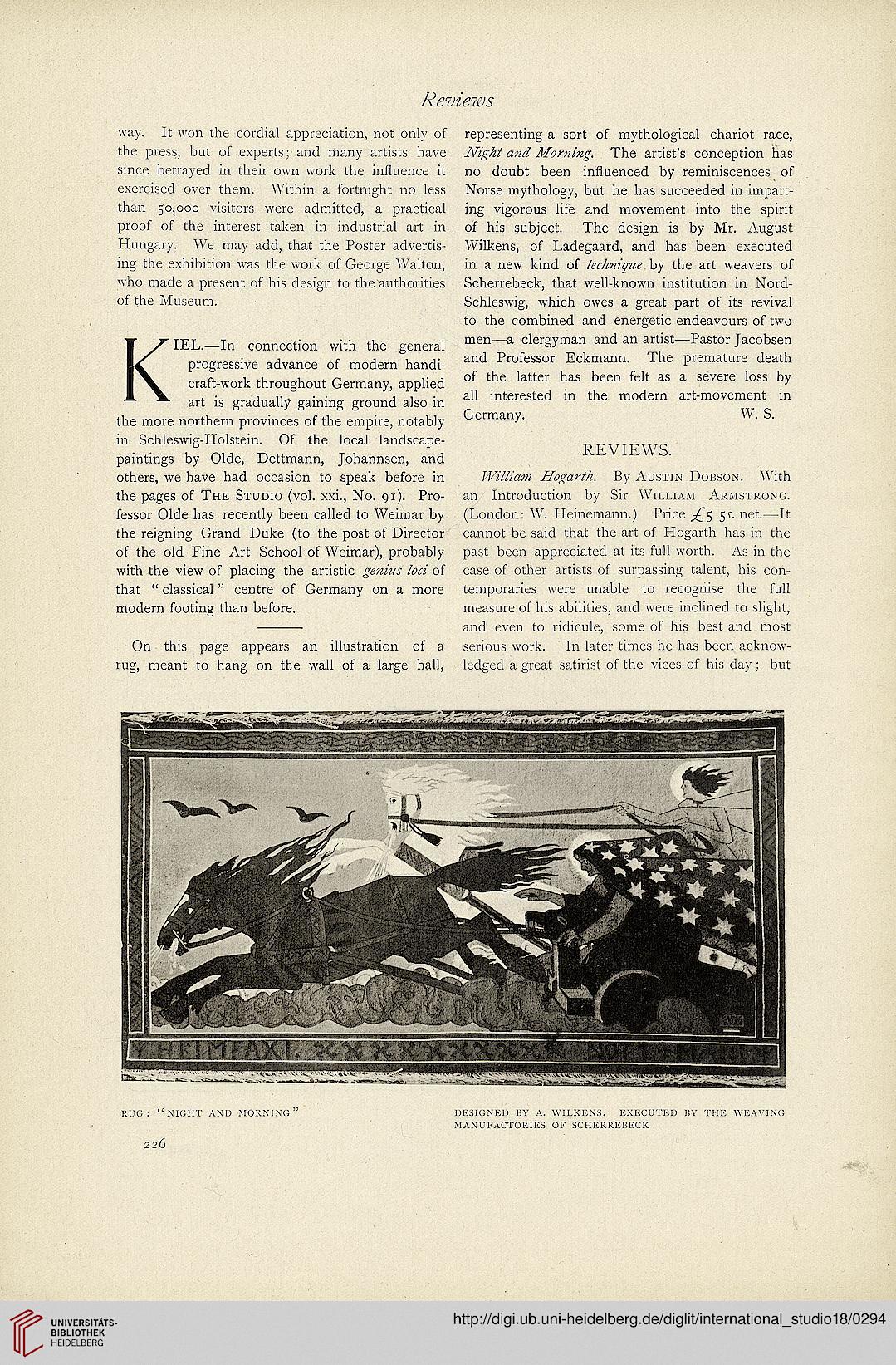 
way. It won the cordial appreciation, not oniy of
the press, but of experts; and many artists have
since betrayed in their own work the inftuence it
exercised over them. Within a fortnight no less
than 50,000 visitors were admitted, a practical
proof of the interest taken in industrial art in
Hungary. We may add, that the Poster advertis-
ing the exhibition was the work of George Waiton,
who made a present of his design to the authorities
of the Museum.
T ^^"IEL.—In connection with the general
progressive advance of modern handi-
] craft-work throughout Germany, applied
** art is gradualiy gaining ground also in
the more northern provinces of the empire, notably
in Schleswig-Holstein. Of the local landscape-
paintings by Olde, Dettmann, Johannsen, and
others, we have had occasion to speak before in
the pages of THE STUDio (vol. xxi., No. 91). Pro-
fessor Olde has recently been called to Weimar by
the reigning Grand Duke (to the post of Director
of the old Fine Art School of Weimar), probably
with the view of placing the artistic gwM'M AW of
that " classical" centre of Germany on a more
modern footing than before.

On this page appears an illustration of a
rug, meant to hang on the wall of a large hall,

representing a sort of mythological chariot race,
a/M? The artist's conception has
no doubt been inHuenced by reminiscences of
Norse mythology, but he has succeeded in impart-
ing vigorous life and movement into the spirit
of his subject. The design is by Mr. August
Wilkens, of Ladegaard, and has been executed
in a new kind of by the art weavers of
Scherrebeck, that well-known institution in Nord-
Schleswig, which owes a great part of its revival
to the combined and energetic endeavours of two
men—a clergyman andanartist—Pastorjacobsen
and Professor Eckmann. The premature death
of the latter has been felt as a severe loss by
all interested in the modern art-movement in
Germany. W. S.
REVIEWS.
IPVMW? A?h{?*<27'77k By AUSTIN DOBSON. With
an Introduction by Sir WiLLiAM AnMSTRONG.
(London: W. Heinemann.) Price ^5 5X. net.—It
cannot be said that the art of Hogarth has in the
past been appreciated at its full worth. As in the
case of other artists of surpassing talent, his con-
temporaries were unable to recognise the full
measure of his abilities, and were inclined to slight,
and even to ridicule, some of his best and most
serious work. In later times he has been acknow-
ledged a great satirist of the vices of his day : but