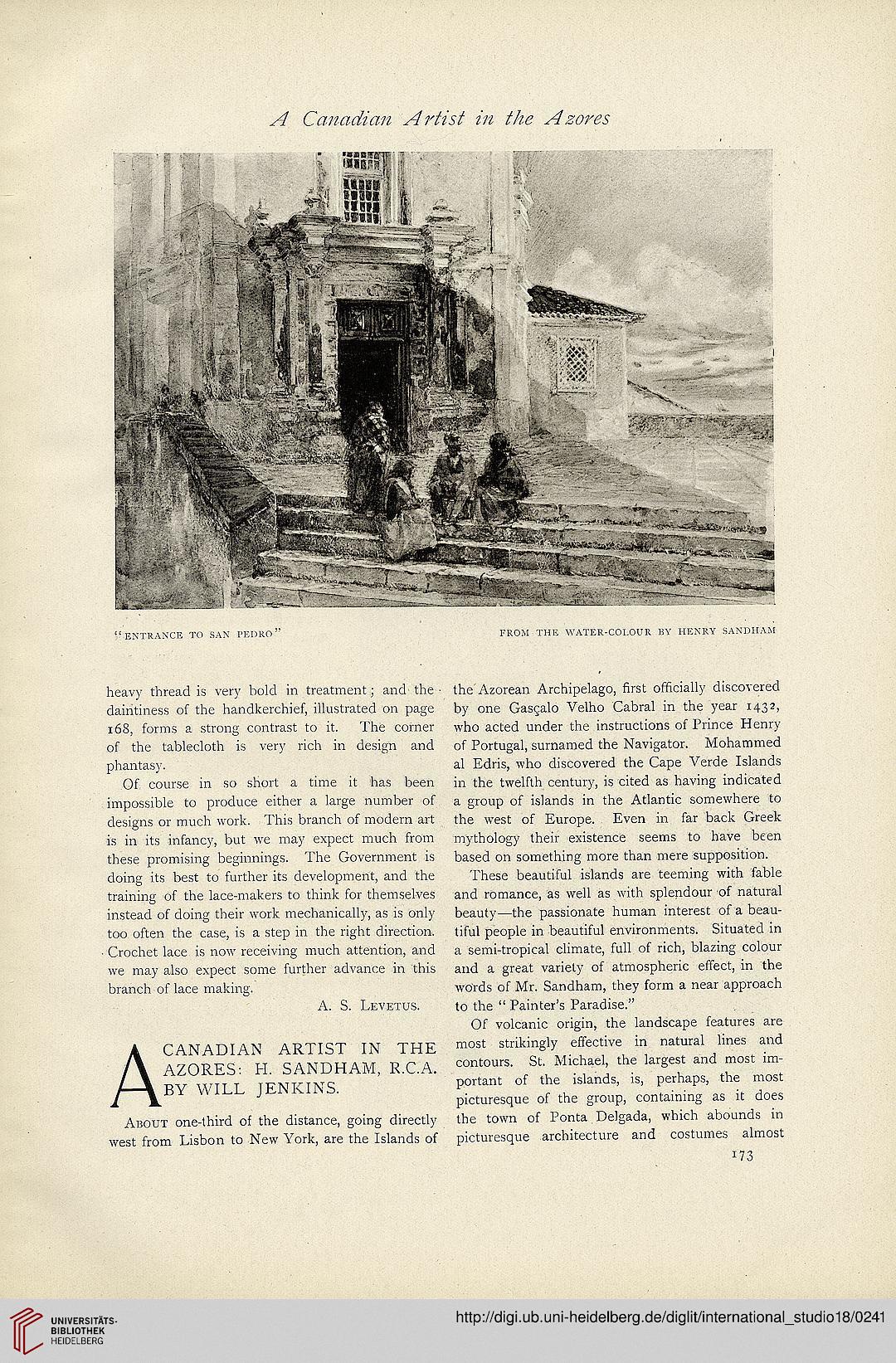 FROM THE WATER-COLOUR RY HENRY SANHHAM

heavy thread is very boid in treatment; and the
daintiness of the handkerchief, illustrated on page
168, forms a strong contrast to it. The corner
of the tabiecloth is very rich in design and
phantasy.
Of course in so short a time it has been
impossibie to produce either a iarge number of
designs or much work. This branch of modern art
is in its infancy, but we may expect much from
these promising beginnings. The Government is
doing its best to further its development, and the
training of the iace-makers to think for themselves
instead of doing their work mechanicaiiy, as is oniy
too often the case, is a step in the right direction,
Crochet iace is now receiving much attention, and
we may also expect some further advance in this
branch of lace making.
A. S. LEVETUS.
A CANADIAN ARTIST IN THE
/\ AZORES: H. SANDHAM, R.C.A.
\ BY WILL JENKINS.
ABOUT one-third of the distance, going directiy
west from Lisbon to New York, are the Isiands of

the Azorean Arcbipelago, hrst ofhcialiy discovered
by one Gasqaio Veiho Cabrai in the year 1432,
who acted under the instructions of Prince Henry
of Portugal, surnamed the Navigator. Mohammed
ai Edris, who discovered the Cape Verde Isiands
in the twelfth century, is cited as having indicated
a group of islands in the Atiantic somewhere to
the west of Europe. Even in far back Greek
mythoiogy their existence seems to have been
based on something more than rnere supposition.
These beautiful islands are teeming with fable
and romance, as well as with splendour of natural
beauty—the passionate human interest of a beau-
tiful people in beautiful environments. Situated in
a semi-tropical climate, full of rich, blazing colour
and a great variety of atmospheric effect, in the
words of Mr. Sandham, they form a near approach
to the " Painter's Paradise."
Of volcanic origin, the landscape features are
most strikingly effective in natural lines and
contours. St. Michael, the largest and most irn-
portant of the islands, is, perhaps, the rnost
picturesque of the group, containing as it does
the town of Ponta Delgada, which abounds in
picturesque architecture and costumes almost
173