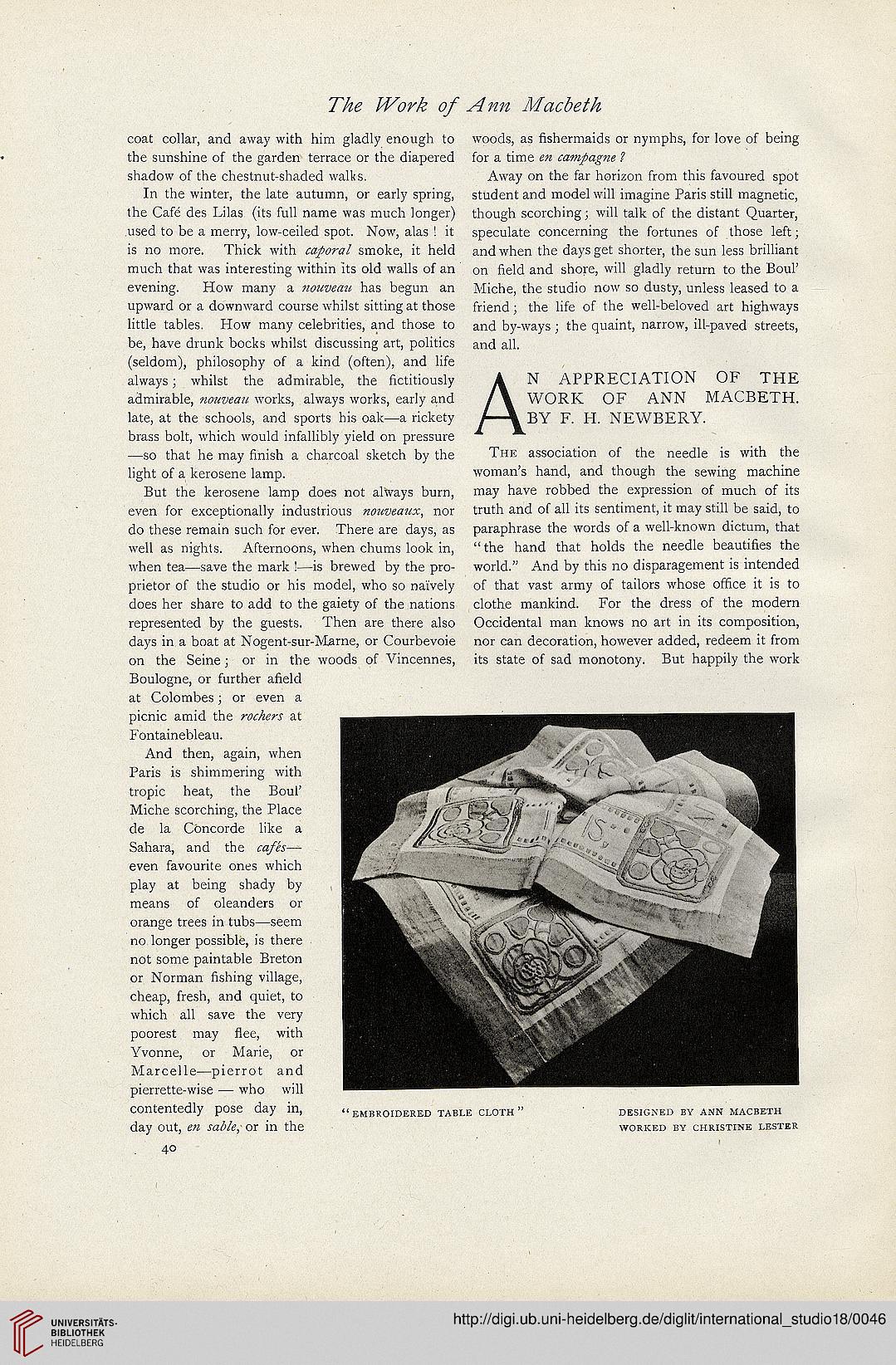 coat collar, and away with him gladiy enough to
the sunshine of the garden terrace or the diapered
shadow of the chestnut-shaded walks.
In the winter, the late autumn, or eariy spring,
the Cafe des Liias (its fuil name was much longer)
used to be a merry, low-ceiied spot. Now, alas ! it
is no more. Thick with <r%^<77*<7J smoke, it heid
much that was interesting within its old walis of an
evening. How many a /MMZWM has begun an
upward or a downward course whiist sitting at those
iittie tabies. How many celebrities, and those to
be, have drunk bocks whiist discussing art, poiitics
(seidom), phiiosophy of a kind (often), and iife
aiways; whilst the admirabie, the Hctitiously
admirabie, works, always works, eariy and
iate, at the schools, and sports his oak—a rickety
brass bolt, which wouid infailibiy yieid on pressure
—so that he may Hnish a charcoal sketch by the
iight of a kerosene iamp.
But the kerosene iamp does not aiways burn,
even for exceptionaiiy industrious 7z<7%w#M.x, nor
do these remain such for ever. There are days, as
weil as nights. Afternoons, when chums look in,
when tea—save the mark !—is brewed by the pro-
prietor of the studio or his modei, who so naiveiy
does her share to add to the gaiety of the nations
represented by the guests. Then are there aiso
days in a boat at Nogent-sur-Marne, or Courbevoie
on the Seine; or in the woods of Vincennes,
Boulogne, or further aheid
at Colombes; or even a
picnic amid the 7*<7<r^<?7-s' at
Fontainebieau.
And then, again, when
Paris is shimmering with
tropic heat, the Boul'
Miche scorching, the Piace
de la Concorde like a
Sahara, and the <r<7/M—
even favourite ones which
play at being shady by
means of oleanders or
orange trees in tubs—seem
no ionger possible, is there
not some paintable Breton
or Norman Hshing viHage,
cheap, fresh, and quiet, to
which all save the very
poorest may Hee, with
Yvonne, or Marie, or
Marcelle—pierrot and
pierrette-wise — who will
contentedly pose day in,
day out, ra<5/<?, or in the

woods, as Hshermaids or nymphs, for love of being
for a time «7z raTTT^iZgw .?
Away on the far horizon from this favoured spot
student and model wiH imagine Paris still magnetic,
though scorching; will talk of the distant Quarter,
speculate concerning the fortunes of those left;
and when the days get shorter, the sun less brilliant
on field and shore, will gladly return to the Boul'
Miche, the studio now so dusty, unless leased to a
friend; the life of the well-beloved art highways
and by-ways ; the quaint, narrow, ill-paved streets,
and all.
A N APPRECIATION OF THE
/\ WORK OF ANN MACBETH.
/—\ BY F. H. NEWBERY.
THE association of the needle is with the
woman's hand, and though the sewing machine
may have robbed the expression of much of its
truth and of all its sentiment, it may still be said, to
paraphrase the words of a well-known dictum, that
"the hand that holds the needle beautihes the
world." And by this no disparagement is intended
of that vast army of tailors whose of&ce it is to
clothe mankind. For the dress of the modern
Occidental man knows no art in its composition,
nor can decoration, however added, redeem it from
its state of sad monotony. But happily the work