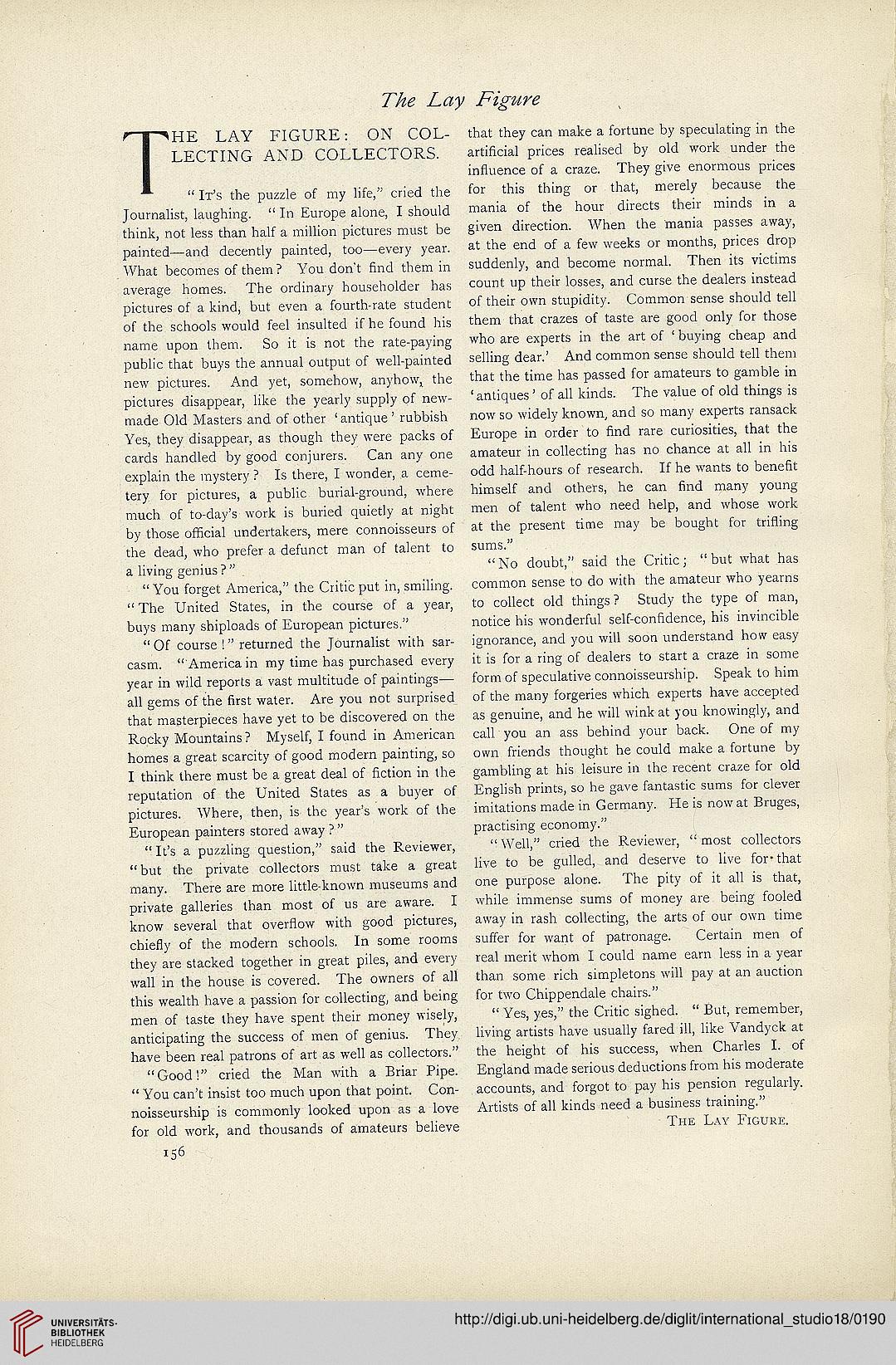 HE LAY FIGURE: ON COL-
LECTING AND COLLECTORS.

" Ii's the puzzle of my life," cried the
Journalist, laughing. "In Europealone, I should
think, not less than half a million pictures must be
painted—and decently painted, too—every year.
What becomes of them ? You don't hnd them in
average homes. The ordinary householder has
pictures of a kind, but even a fourth-rate student
of the schools would feel insulted if he found his
name upon them. So it is not the rate-paying
public that buys the annual output of well-painted
new pictures. And yet, somehow, anyhow, the
pictures disappear, like the yearly supply of new-
made Old Masters and of other 'antique ' rubbish
Yes, they disappear, as though they were packs of
cards handled by good conjurers. Can any one
explain the mystery ? Is there, I wonder, a ceme-
tery for pictures, a public burial-ground, where
much of to-day's work is buried quietly at night
by those ofhcial undertakers, mere connoisseurs of
the dead, who prefer a defunct man of talent to
a living genius ? "
" You forget America," the Critic put in, smiling.
" The United States, in the course of a year,
buys many shiploads of European pictures."
"Of course !" returned the Journalist with sar-
casm. " America in my time has purchased every
year in wiid reports a vast multitude of paintings—
all gems of the first water. Are you not surprised
that masterpieces have yet to be discovered on the
Rocky Mountains ? Myself, I found in American
homes a great scarcity of good modern painting, so
I think there must be a great deal of hction in the
reputation of the United States as a buyer of
pictures. Where, then, is the year's work of the
European painters stored away ? "
" It's a puzzling question," said the Reviewer,
"but the privatecollectorsmusttake agreat
many. There are more little-known museums and
private galleries than most of us are aware. I
know several that overHow with good pictures,
chiehy of the modern schools. In some rooms
they are stacked together in great piles, and every
wall in the house is covered. The owners of all
this wealth have a passion for collecting, and being
men of taste they have spent their money wisely,
anticipating the success of men of genius. They
have been real patrons of art as well as collectors."
"Good!" cried the Man with a Briar Pipe.
" You can't insist too much upon that point. Con-
noisseurship is commonly looked upon as a love
for old work, and thousands of amateurs believe
156

that they can rnake a fortune by speculating in the
artihcial prices realised by old work under the
inhuence of a craze. They give enormous prices
for this thing or that, merely because the
mania of the hour directs their minds in a
given direction. When the mania passes away,
at the end of a few weeks or months, prices drop
suddenly, and become normal. Then its victims
count up their losses, and curse the dealers instead
of their own stupidity. Common sense should tell
them that crazes of taste are good only for those
who are experts in the art of ' buying cheap and
selling dear.' And common sense should tell them
that the time has passed for amateurs to gamble in
' antiques ' of all kinds. The value of old things is
now so widely known, and so many experts ransack
Europe in order to hnd rare curiosities, that the
amateur in collecting has no chance at all in his
odd half-hours of research. If he wants to beneht
himself and others, he can hnd many young
men of talent who need help, and whose work
at the present time may be bought for triHing
sums."
" No doubt," said the Critic; " but what has
common sense to do with the amateur who yearns
to collect old things ? Study the type of man,
notice his wonderful self-confrdence, his invincible
ignorance, and you will soon understand how easy
it is for a ring of dealers to start a craze in some
form of speculative connoisseurship. Speak to him
of the many forgeries which experts have accepted
as genuine, and he will wink at you knowingly, and
call you an ass behind your back. One of my
own friends thought he could make a fortune by
gambling at his leisure in the recent craze for old
English prints, so he gave fantastic sums for clever
imitations made in Germany. He is nowat Bruges,
practising economy."
"Well," cried the Reviewer, "most collectors
live to be gulled, and deserve to live for-that
one purpose alone. The pity of it all is that,
while immense sums of money are being fooled
away in rash collecting, the arts of our own time
suffer for want of patronage. Certain men of
real merit whom I could name earn less in a year
than some rich simpletons will pay at an auction
for two Chippendale chairs."
" Yes, yes," the Critic sighed. " But, remember,
living artists have usually fared ill, like Vandyck at
the height of his success, when Charles I. of
England made serious deductions from his moderate
accounts, and forgot to pay his pension regularly.
Artists of all kinds need a business training."
TnE L.w FiGURE.