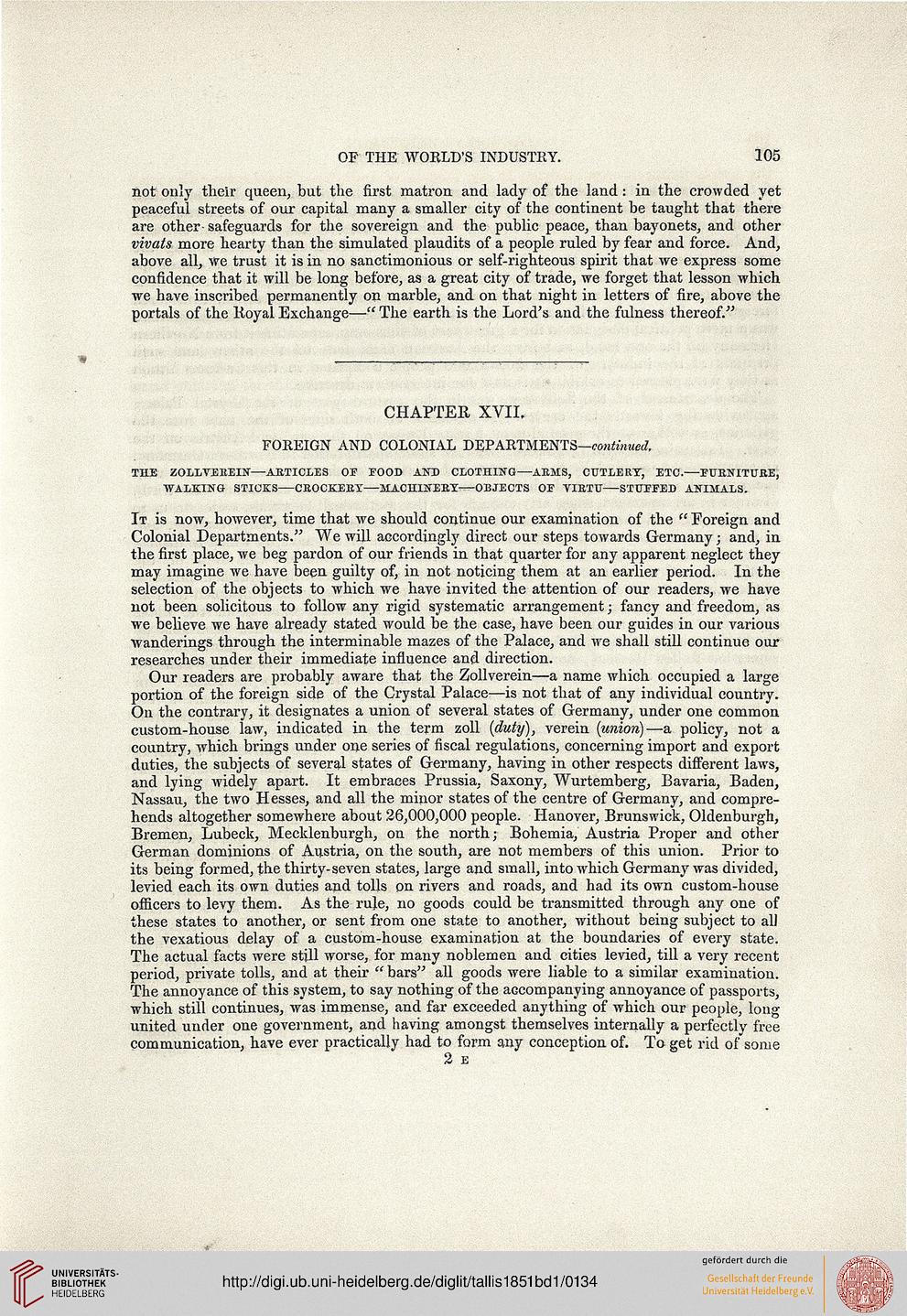 Information about OCR text
OF THE "WORLD'S INDUSTRY. 105

not only their queen, but the first matron and lady of the land : in the crowded yet
peaceful streets of our capital many a smaller city of the continent he taught that there
are other-safeguards for the sovereign and the public peace, than bayonets, and other
vwats more hearty than the simulated plaudits of a people ruled by fear and force. And,
above all, we trust it is in no sanctimonious or self-righteous spirit that we express some
confidence that it will be long before, as a great city of trade, we forget that lesson which
we have inscribed permanently on marble, and on that night in letters of fire, above the
portals of the Koyal Exchange—" The earth is the Lord's and the fulness thereof."

It is now, however, time that we should continue our examination of the " Foreign and
Colonial Departments." "We will accordingly direct our steps towards Germany; and, in
the first place, we beg pardon of our friends in that quarter for any apparent neglect they
may imagine we have been guilty of, in not noticing them at an earlier period. In the
selection of the objects to which we have invited the attention of our readers, we have
not been solicitous to follow any rigid systematic arrangement; fancy and freedom, as
we believe we have already stated would be the case, have been our guides in our various
wanderings through the interminable mazes of the Palace, and we shall still continue our
researches under their immediate influence and direction.

Our readers are probably aware that the Zollverein—a name which occupied a large
portion of the foreign side of the Crystal Palace—is not that of any individual country.
On the contrary, it designates a union of several states of Germany, under one common
custom-house law, indicated in the term zoll (duty), verein (union)—a policy, not a
country, which brings under one series of fiscal regulations, concerning import and export
duties, the subjects of several states of Germany, having in other respects different laws,
and lying widely apart. It embraces Prussia, Saxony, Wurtemberg, Bavaria, Baden,
Nassau, the two Hesses, and all the minor states of the centre of Germany, and compre-
hends altogether somewhere about 26,000,000 people. Hanover, Brunswick, Oldenburgh,
Bremen, Lubeck, Mecklenburgh, on the north; Bohemia, Austria Proper and other
German dominions of Austria, on the south, are not members of this union. Prior to
its being formed, the thirty-seven states, large and small, into which Germany was divided,
levied each its own duties and tolls on rivers and roads, and had its own custom-house
officers to levy them. As the rule, no goods could be transmitted through any one of
these states to another, or sent from one state to another, without being subject to ah"
the vexatious delay of a custom-house examination at the boundaries of every state.
The actual facts were still worse, for many noblemen and cities levied, till a very recent
period, private tolls, and at their "bars" all goods were liable to a similar examination.
The annoyance of this system, to say nothing of the accompanying annoyance of passports,
which still continues, was immense, and far exceeded anything of which our people, long-
united under one government, and having amongst themselves internally a perfectly free
communication, have ever practically had to form any conception of. To get rid of some