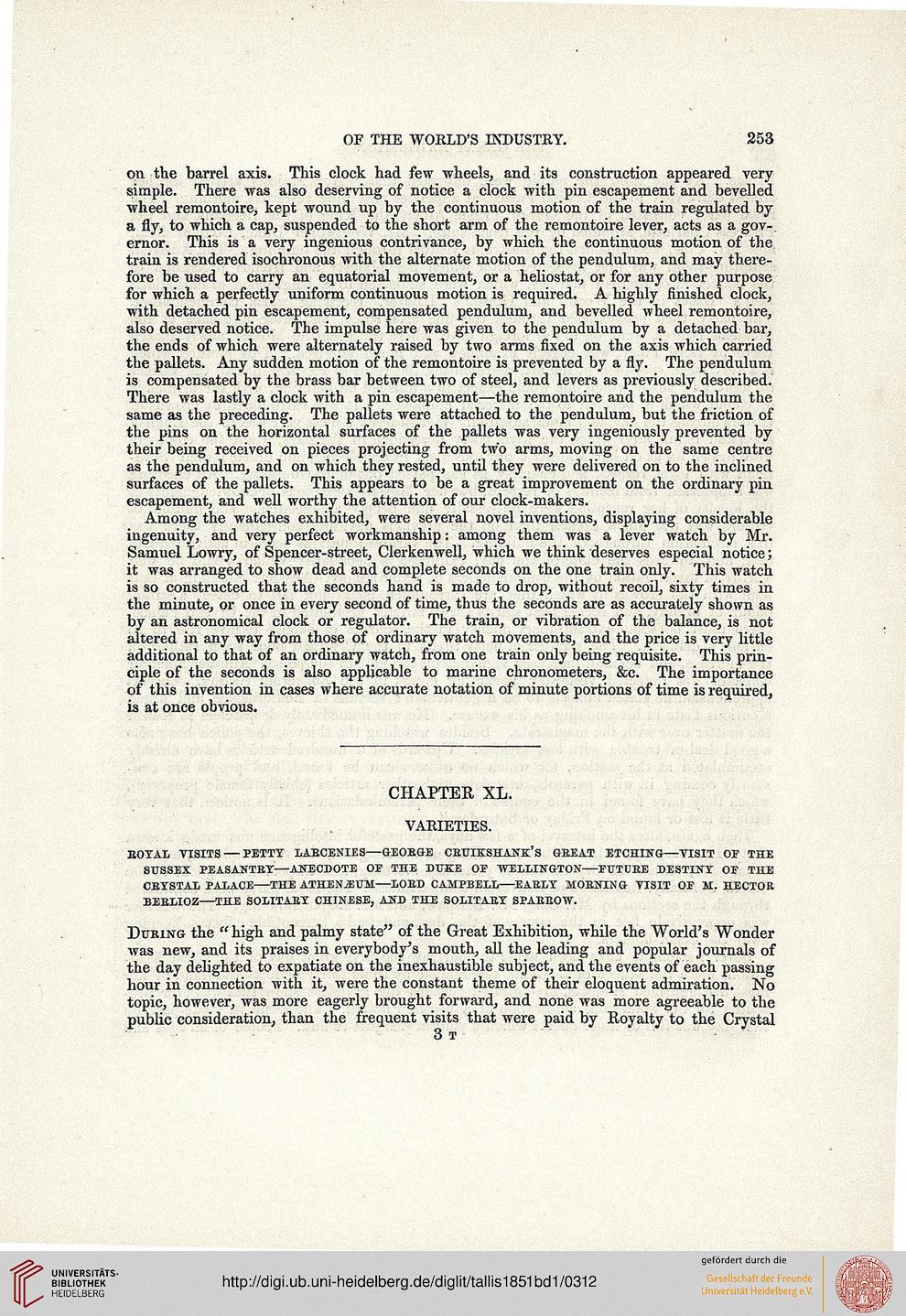 Information about OCR text
OF THE "WORLD'S INDUSTRY. 253

on. the barrel axis. This clock tad few wheels, and its construction appeared very
simple. There was also deserving of notice a clock with pin escapement and bevelled
wheel remontoire, kept wound up by the continuous motion of the train regulated by
a fly, to which a cap, suspended to the short arm of the remontoire lever, acts as a gov-,
ernor. This is a very ingenious contrivance, by which the continuous motion of the
train is rendered isochronous with the alternate motion of the pendulum, and may there-
fore be used to carry an equatorial movement, or a heliostat, or for any other purpose
for which a perfectly uniform continuous motion is required. A highly finished clock,
with detached pin escapement, compensated pendulum, and bevelled wheel remontoire,
also deserved notice. The impulse here was given to the pendulum by a detached bar,
the ends of which were alternately raised by two arms fixed on the axis which carried
the pallets. Any sudden motion of the remontoire is prevented by a fly. The pendulum
is compensated by the brass bar between two of steel, and levers as previously described.
There was lastly a clock with a pin escapement—the remontoire and the pendulum the
same as the preceding. The pallets were attached to the pendulum, but the friction of
the pins on the horizontal surfaces of the pallets was very ingeniously prevented by
their being received on pieces projecting from two arms, moving on the same centre
as the pendulum, and on which they rested, until they were delivered on to the inclined
surfaces of the pallets. This appears to be a great improvement on the ordinary pin
escapement, and well worthy the attention of our clock-makers.

Among the watches exhibited, were several novel inventions, displaying considerable
ingenuity, and very perfect workmanship: among them was a lever watch by Mr.
Samuel Lowry, of Spencer-street, Clerkenweli, which we think deserves especial notice;
it was arranged to show dead and complete seconds on the one train only. This watch
is so constructed that the seconds hand is made to drop, without recoil, sixty times in
the minute, or once in every second of time, thus the seconds are as accurately shown as
by an astronomical clock or regulator. The train, or vibration of the balance, is not
altered in any way from those of ordinary watch movements, and the price is very little
additional to that of an ordinary watch, from one train only being requisite. This prin-
ciple of the seconds is also applicable to marine chronometers, &c. The importance
of this invention in cases where accurate notation of minute portions of time is required,
is at once obvious.

During the "high and palmy state" of the Great Exhibition, while the "World's "Wonder
was new, and its praises in everybody's month, all the leading and popular journals of
the day delighted to expatiate on the inexhaustible subject, and the events of each passing
hour in connection with it, were the constant theme of their eloquent admiration. No
topic, however, was more eagerly brought forward, and none was more agreeable to the
public consideration, than the frequent visits that were paid by Royalty to the Crystal