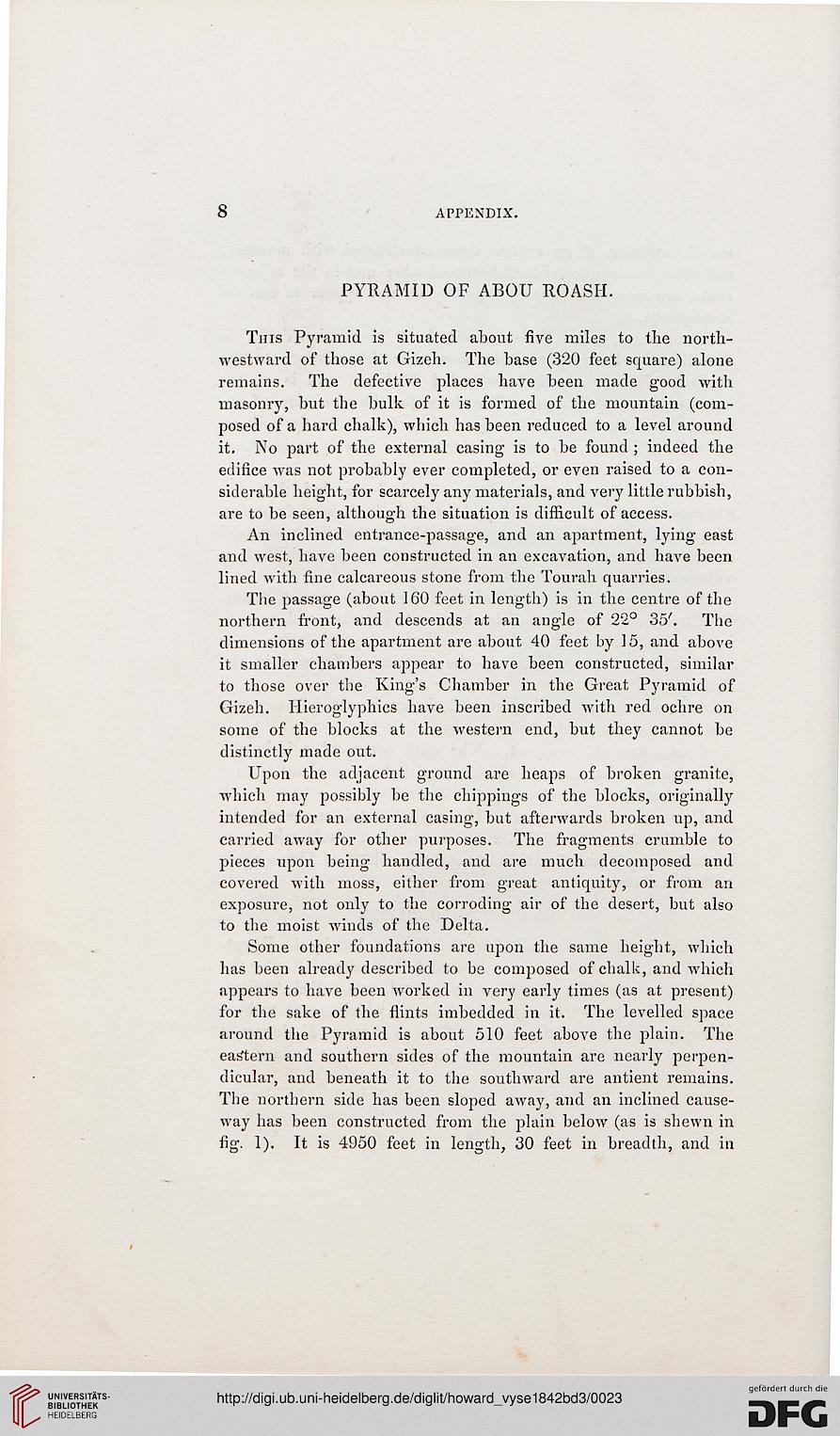 This Pyramid is situated about five miles to the north-
westward of those at Gizcli. The base (320 feet square) alone
remains. The defective places have been made good with
masonry, but the bulk of it is formed of the mountain (com-
posed of a hard chalk), which has been reduced to a level around
it. No part of the external casing is to be found ; indeed the
edifice was not probably ever completed, or even raised to a con-
siderable height, for scarcely any materials, and very little rubbish,
are to be seen, although the situation is difficult of access.

An inclined entrance-passage, and an apartment, lying east
and west, have been constructed in an excavation, and have been
lined with fine calcareous stone from the Tourah quarries.

The passage (about 160 feet in length) is in the centre of the
northern front, and descends at an angle of 22° 35'. The
dimensions of the apartment are about 40 feet hy 15, and above
it smaller chambers appear to have been constructed, similar
to those over the King's Chamber in the Great Pyramid of
Gizeh. Hieroglyphics have been inscribed with red ochre on
some of the blocks at the western end, but they cannot be
distinctly made out.

Upon the adjacent ground are heaps of broken granite,
which may possibly be the chippings of the blocks, originally
intended for an external casing, but afterwards broken up, and
carried away for other purposes. The fragments crumble to
pieces upon being handled, and are much decomposed and
covered with moss, either from great antiquity, or from an
exposure, not only to the corroding air of the desert, but also
to the moist winds of the Delta.

Some other foundations are upon the same height, which
has been already described to be composed of chalk, and which
appears to have been worked in very early times (as at present)
for the sake of the flints imbedded in it. The levelled space
around the Pyramid is about 510 feet above the plain. The
eastern and southern sides of the mountain are nearly perpen-
dicular, and beneath it to the southward are antient remains.
The northern side has been sloped away, and an inclined cause-
way has been constructed from the plain below (as is shewn in
fig. 1). It is 4950 feet in length, 30 feet in breadth, and in