Perring, John Shae; Howard-Vyse, Richard William Howard
Operations carried on at the Pyramids of Gizeh in 1837: with an account of a voyage into upper Egypt, and Appendix (Band 3): Appendix — London, 1842 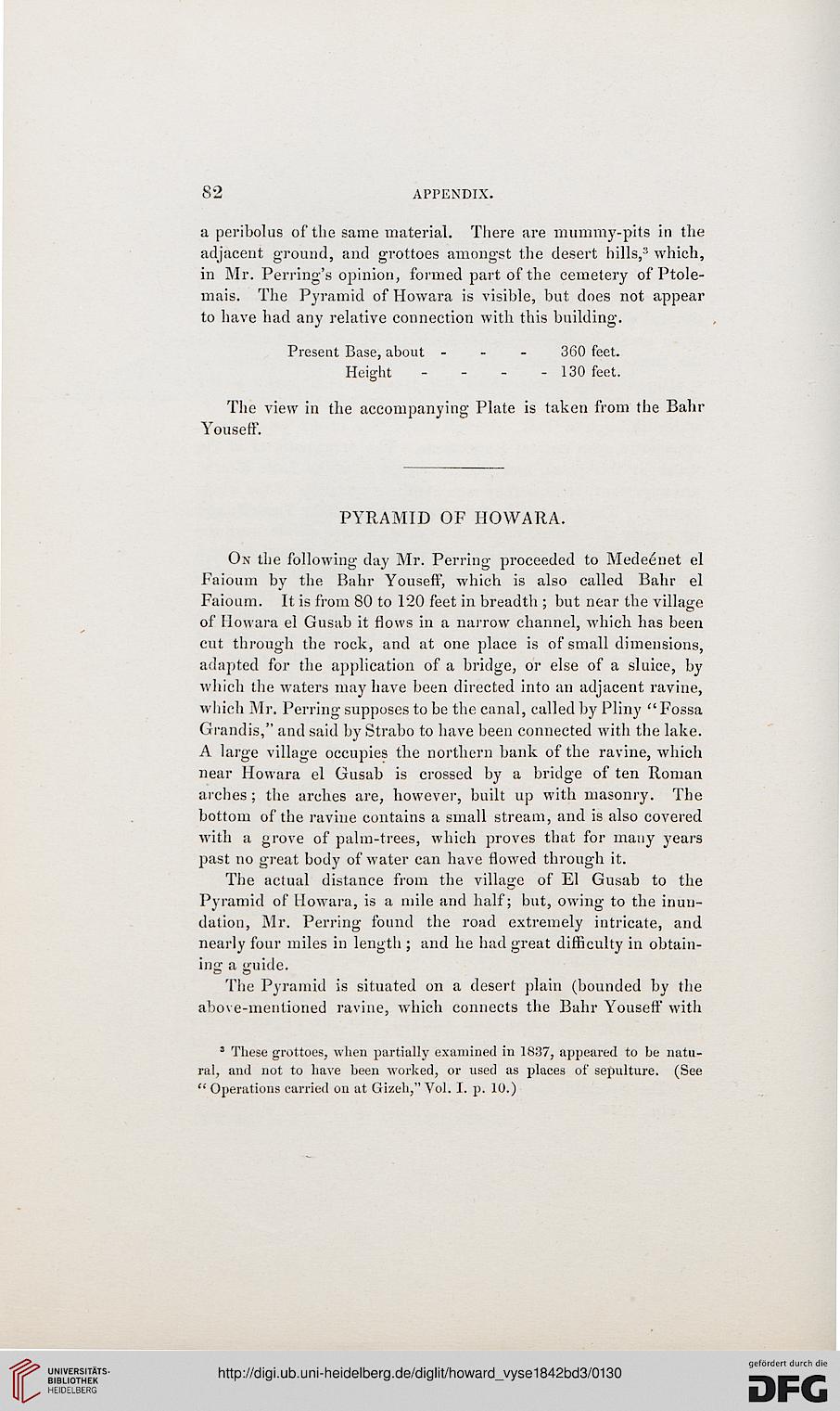 a peribolus of the same material. There are mummy-pita in the
adjacent ground, and grottoes amongst the desert hills,3 which,
in Mr. Perring's opinion, formed part of the cemetery of Ptole-
mais. The Pyramid of Howara is visible, but does not appear
to have had any relative connection with this building.

The view in the accompanying Plate is taken from the Bahr
Yeuseff.

On the following day Mr. Perring proceeded to Medeenet el
Faioum by the Bahr Youseff, which is also called Bahr el
Faioum. It is from 80 to 120 feet in breadth ; but near the village
of Ilowara el Gusab it flows in a narrow channel, which has been
cut through the rock, and at one place is of small dimensions,
adapted for the application of a bridge, or else of a sluice, by
which the waters may have been directed into an adjacent ravine,
which Mr. Perring supposes to be the canal, called by Pliny " Fossa
Grandis," and said by Strabo to have been connected witli the lake.
A large village occupies the northern bank of the ravine, which
near Howara el Gusab is crossed by a bridge of ten Roman
arches ; the arches are, however, built up with masonry. The
bottom of the ravine contains a small stream, and is also covered
with a grove of palm-trees, which proves that for many years
past no great body of water can have flowed through it.

The actual distance from the village of El Gusab to the
Pyramid of Ilowara, is a mile and half; but, owing to the inun-
dation, Mr. Perring found the road extremely intricate, and
nearly four miles in length ; and he had great difficulty in obtain-
ing a guide.

The Pyramid is situated on a desert plain (bounded by the
above-mentioned ravine, which connects the Bahr Youseff witli

3 These grottoes, when partially examined in 1837, appeared to be natu-
ral, and not to have been worked, or used as places of sepulture. (See
" Operations carried on at Gizeb," Vol. I. p. 10.)