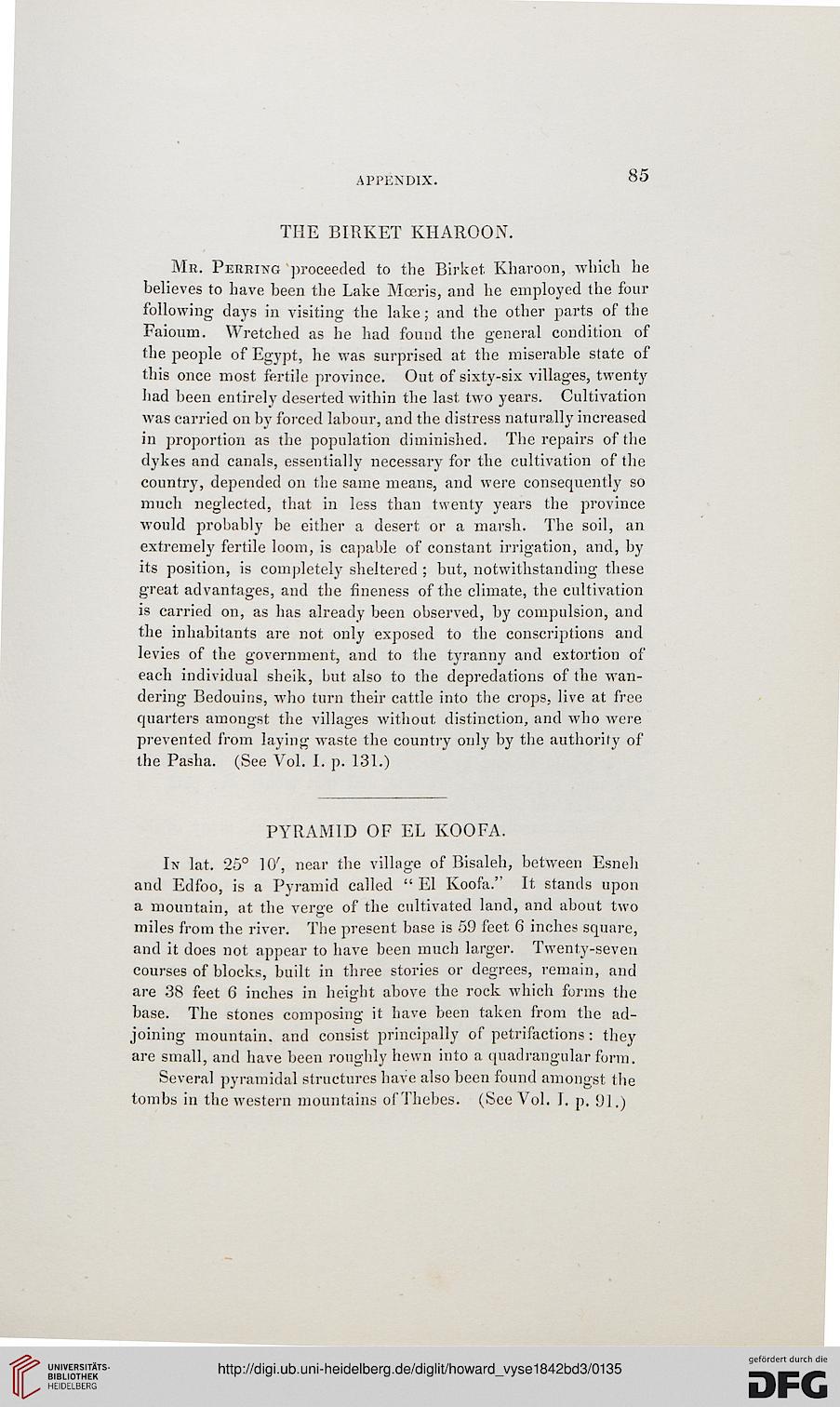 Mr. Perring proceeded to the Birket Kharoon, which he
believes to have been the Lake Moeris, and he employed the four
following days in visiting the lake; and the other parts of the
Faioum. Wretched as he had found the general condition of
the people of Egypt, he was surprised at the miserable state of
this once most fertile province. Out of sixty-six villages, twenty
had been entirely deserted within the last two years. Cultivation
was carried on by forced labour, and the distress naturally increased
in proportion as the population diminished. The repairs of the
dykes and canals, essentially necessary for the cultivation of the
country, depended on the same means, and were consequently so
much neglected, that in less than twenty years the province
would probably be either a desert or a marsh. The soil, an
extremely fertile loom, is capable of constant irrigation, and, by
its position, is completely sheltered ; but, notwithstanding these
great advantages, and the fineness of the climate, the cultivation
is carried on, as has already been observed, by compulsion, and
the inhabitants are not only exposed to the conscriptions and
levies of the government, and to the tyranny and extortion of
each individual sheik, but also to the depredations of the wan-
dering Bedouins, who turn their cattle into the crops, live at free
quarters amongst the villages without, distinction, and who were
prevented from laying waste the country only by the authority of
the Pasha. (See Vol. I. p. 131.)

In lat. 25° 10', near the village of Bisaleh, between Esneh
and Edfoo, is a Pyramid called " El Koofa." It stands upon
a mountain, at the verge of the cultivated land, and about two
miles from the river. The present base is 59 feet 6 inches square,
and it does not appear to have been much larger. Twenty-seven
courses of blocks, built in three stories or degrees, remain, and
are 38 feet 6 inches in height above the rock which forms the
base. The stones composing it have been taken from the ad-
joining mountain, and consist principally of petrifactions : they
are small, and have been roughly hewn into a quadrangular form.

Several pyramidal structures have also been found amongst the
tombs in the western mountains of Thebes. (See Vol. I. p. 91.)