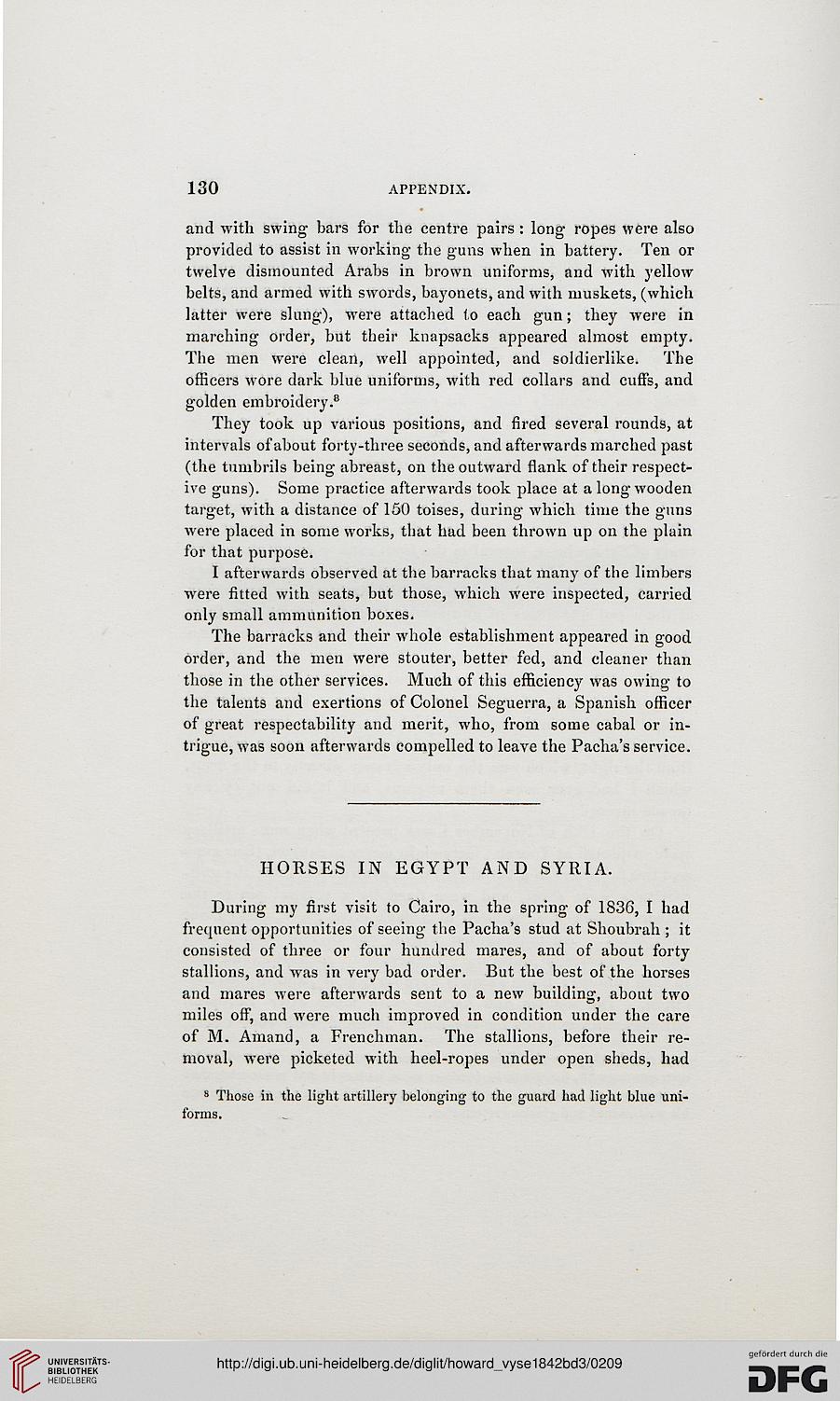 and with swing bars for the centre pairs : long ropes were also
provided to assist in working the guns when in battery. Ten or
twelve dismounted Arabs in brown uniforms, and with yellow
belts, and armed with swords, bayonets, and with muskets, (which
latter were slung), were attached to each gun; they were in
marching order, but their knapsacks appeared almost empty.
The men were clean, well appointed, and soldierlike. The
officers wore dark blue uniforms, with red collars and cuffs, and
golden embroidery.8

They took up various positions, and fired several rounds, at
intervals of about forty-three seconds, and afterwards marched past
(the tumbrils being abreast, on the outward flank of their respect-
ive guns). Some practice afterwards took place at a long wooden
target, with a distance of 150 toises, during which time the guns
were placed in some works, that had been thrown up on the plain
for that purpose.

I afterwards observed at the barracks that many of the limbers
were fitted with seats, but those, which were inspected, carried
only small ammunition boxes.

The barracks and their whole establishment appeared in good
order, and the men were stouter, better fed, and cleaner than
those in the other services. Much of this efficiency was owing to
the talents and exertions of Colonel Seguerra, a Spanish officer
of great respectability and merit, who, from some cabal or in-
trigue, was soon afterwards compelled to leave the Pacha's service.

HORSES IN EGYPT AND SYRIA.

During my first visit to Cairo, in the spring of 183G, I had
frequent opportunities of seeing the Pacha's stud at Shoubrah ; it
consisted of three or four hundred mares, and of ahout forty
stallions, and was in very bad order. But the best of the horses
and mares were afterwards sent to a new building, about two
miles off, and were much improved in condition under the care
of M. Amand, a Frenchman. The stallions, before their re-
moval, were picketed with heel-ropes under open sheds, had

8 Those in the light artillery belonging to the guard had light blue uni-
forms.