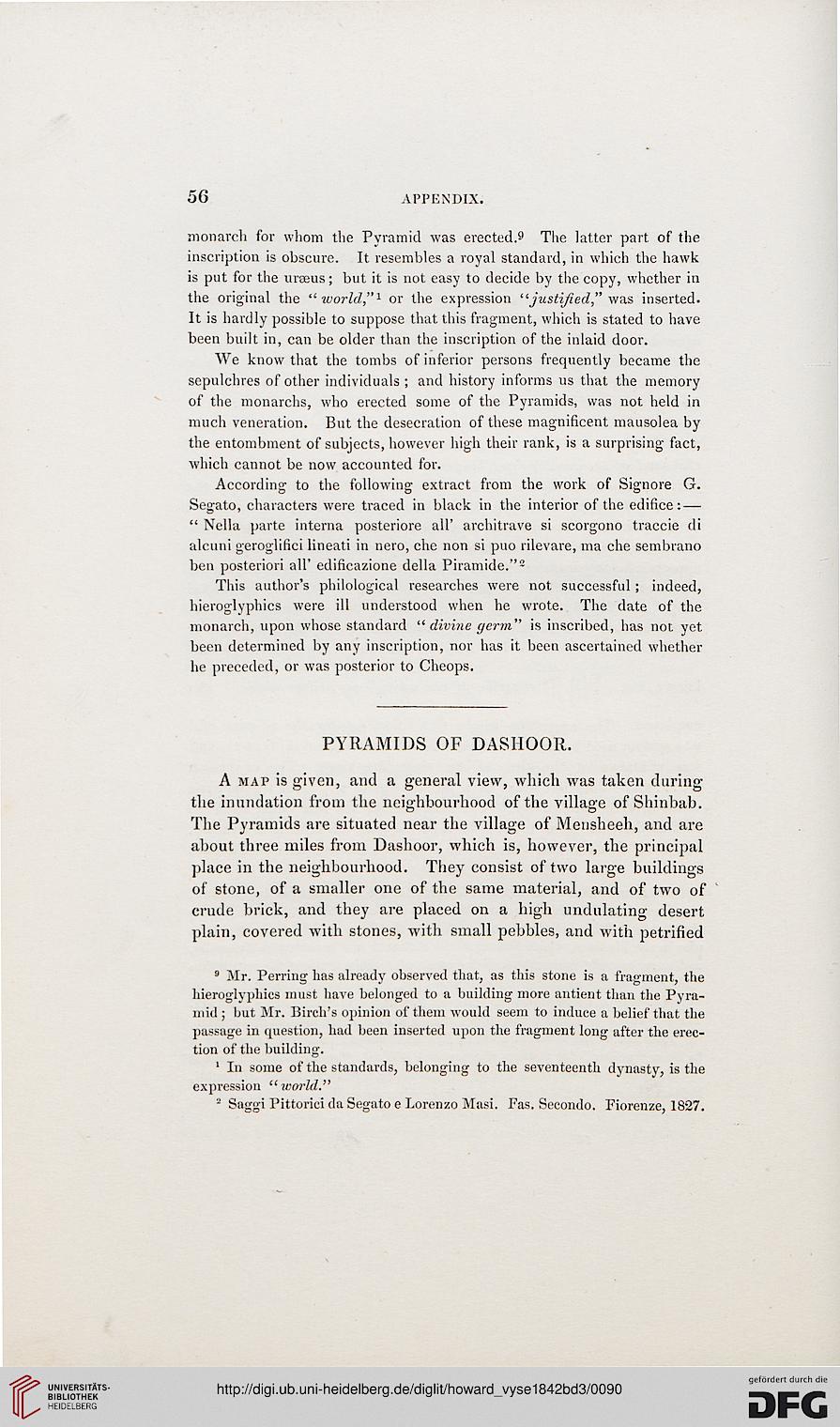 monarch for whom the Pyramid was erected.9 The latter part of the
inscription is obscure. It resembles a royal standard, in which the hawk
is put for the uroeus; but it is not easy to decide by the copy, whether in
the original the "-world,"1 or the expression "justified," was inserted.
It is hardly possible to suppose that this fragment, which is stated to have
been built in, can be older than the inscription of the inlaid door.

We know that the tombs of inferior persons frequently became the
sepulchres of other individuals ; and history informs us that the memory
of the monarchs, who erected some of the Pyramids, was not held in
much veneration. But the desecration of these magnificent mausolea by
the entombment of subjects, however high their rank, is a surprising fact,
which cannot be now accounted for.

This author's philological researches were not successful ; indeed,
hieroglyphics were ill understood when he wrote. The date of the
monarch, upon whose standard " divine germ" is inscribed, has not yet
been determined by any inscription, nor has it been ascertained whether
he preceded, or was posterior to Cheops.

A map is given, and a general view, which was taken during
the inundation from the neighbourhood of the village of Shinbab.
The Pyramids are situated near the village of Meusheeh, and are
about three miles from Dashoor, which is, however, the principal
place in the neighbourhood. They consist of two large buildings
of stone, of a smaller one of the same material, and of two of
crude brick, and they are placed on a high undulating desert
plain, covered with stones, with small pebbles, and with petrified

9 Mr. Perring has already observed that, as this stone is a fragment, the
hieroglyphics must have belonged to a building more antient than the Pyra-
mid ; but Mr. Birch's opinion of them would seem to induce a belief that the
passage in question, had been inserted upon the fragment long after the erec-
tion of the building.

1 In some of the standards, belonging to the seventeenth dynasty, is the
expression " world."