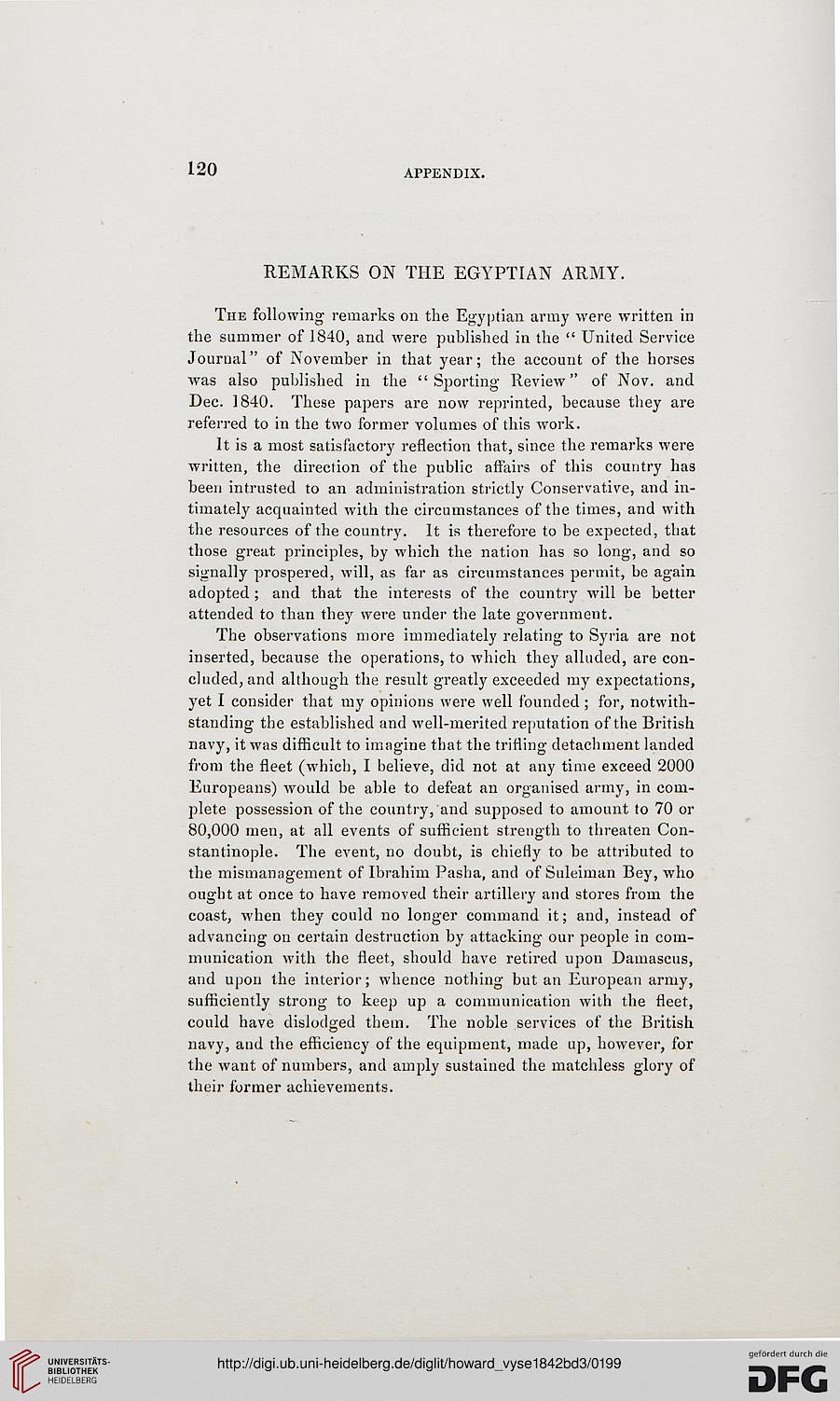 REMARKS ON THE EGYPTIAN ARMY.

The following remarks on the Egyptian army were written in
the summer of 1840, and were published in the " United Service
Journal" of November in that year; the account of the horses
was also published in the "Sporting Review" of Nov. and
Dec. 1840. These papers are now reprinted, because they are
referred to in the two former volumes of this work.

It is a most satisfactory reflection that, since the remarks were
written, the direction of the public affairs of this country has
been intrusted to an administration strictly Conservative, and in-
timately acquainted with the circumstances of the times, and with
the resources of the country. It is therefore to be expected, that
those great principles, by which the nation has so long, and so
signally prospered, will, as far as circumstances permit, be again
adopted ; and that the interests of the country will be better
attended to than they were under the late government.

The observations more immediately relating to Syria are not
inserted, because the operations, to which they alluded, are con-
cluded, and although the result greatly exceeded my expectations,
yet I consider that my opinions were well founded ; for, notwith-
standing the established and well-merited reputation of the British
navy, it was difficult to imagine that the trifling detachment landed
from the fleet (which, I believe, did not at any time exceed 2000
Europeans) would be able to defeat an organised army, in com-
plete possession of the country, and supposed to amount to 70 or
80,000 men, at all events of sufficient strength to threaten Con-
stantinople. The event, no doubt, is chieHy to be attributed to
the mismanagement of Ibrahim Pasha, and of Suleiman Bey, who
ought at once to have removed their artillery and stores from the
coast, when they could no longer command it; and, instead of
advancing on certain destruction by attacking our people in com-
munication with the fleet, should have retired upon Damascus,
and upon the interior; whence nothing but an European army,
sufficiently strong to keep up a communication with the fleet,
could have dislodged them. The noble services of the British
navy, and the efficiency of the equipment, made up, however, for
the want of numbers, and amply sustained the matchless glory of
their former achievements.