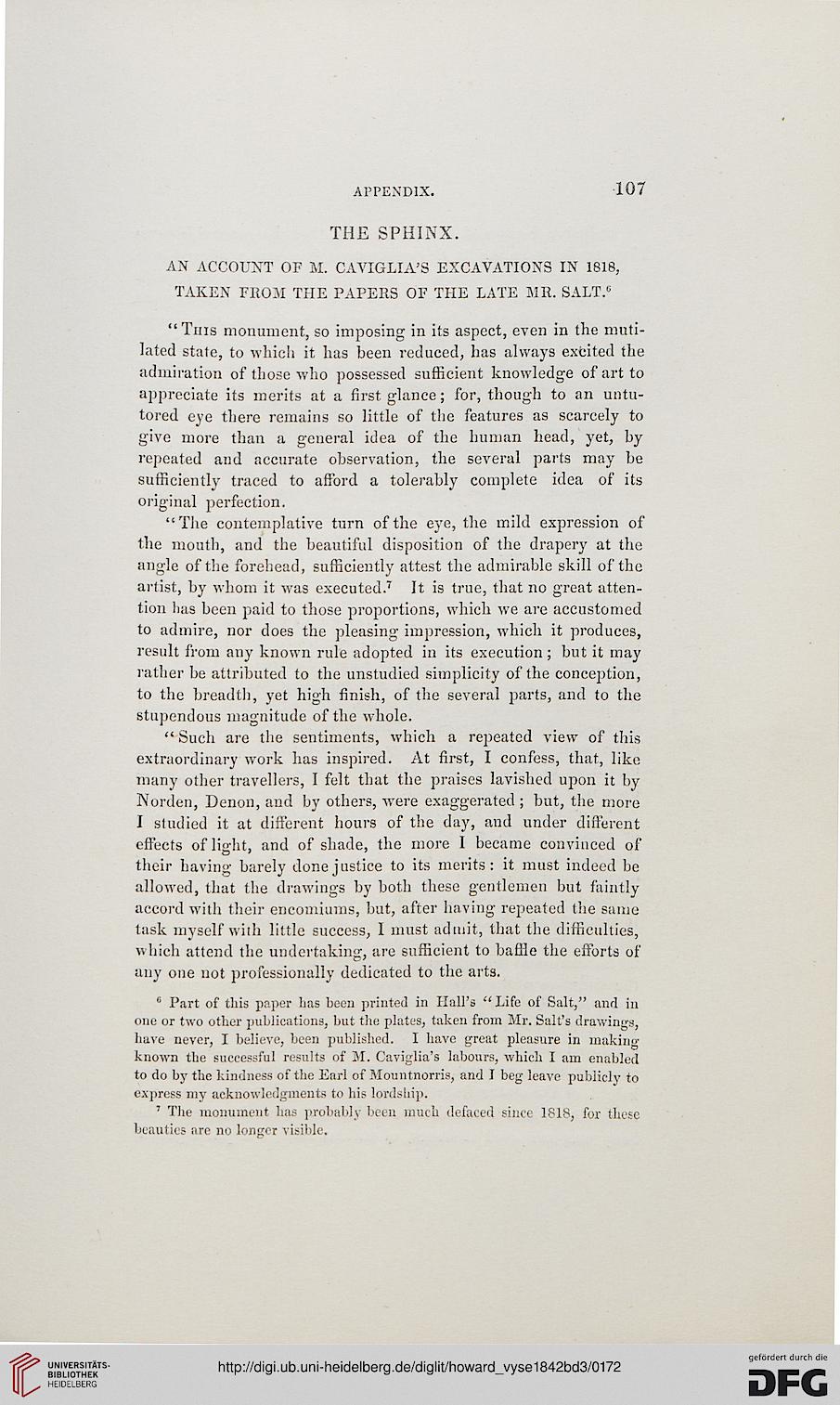 AN ACCOUNT OF M. CAVIGLIA'S EXCAVATIONS IN 1818,
TAKEN FROM THE PAPERS OF THE LATE MR. SALT.0

"This monument, so imposing in its aspect, even in the muti-
lated state, to which it has been reduced, has always excited the
admiration of those who possessed sufficient knowledge of art to
appreciate its merits at a first glance; for, though to an untu-
tored eye there remains so little of the features as scarcely to
give more than a general idea of the human head, yet, by
repeated and accurate observation, the several parts may be
sufficiently traced to afford a tolerably complete idea of its
original perfection.

"The contemplative turn of the eye, the mild expression of
the mouth, and the beautiful disposition of the drapery at the
angle of the forehead, sufficiently attest the admirable skill of the
arlist, by whom it was executed.7 It is true, that no great atten-
tion lias been paid to those proportions, which we are accustomed
to admire, nor does the pleasing impression, which it produces,
result from any known rule adopted in its execution ; but it may
rather be attributed to the unstudied simplicity of the conception,
to the breadth, yet high finish, of the several parts, and to the
stupendous magnitude of the whole.

" Such are the sentiments, which a repeated view of this
extraordinary work has inspired. At first, I confess, that, like
many other travellers, I felt that the praises lavished upon it hy
Norden, Denon, and by others, were exaggerated ; but, the more
I studied it at different hours of the day, and under different
effects of light, and of shade, the more 1 became convinced of
their having barely done justice to its merits: it must indeed be
allowed, that the drawings by both these gentlemen but faintly
accord with their encomiums, but, after having repeated the same
task myself with little success, I must admit, that the difficulties,
which attend the undertaking, are sufficient to baffle the efforts of
any one not professionally dedicated to the arts.

0 Part of this paper has been printed in Hall's "Life of Salt," and in
one or two other publications, but the plates, taken from Mr. Salt's drawings,
have never, I believe, been published. I have great pleasure in making
known the successful results of M. Caviglia's labours, which I am enabled
to do by the kindness of the Earl of Mountnorris, and I beg leave publicly to
express my acknowledgments to his lordsliip.

' The monument has probably been much defaced since 1818, for these
beauties are no longer visible.