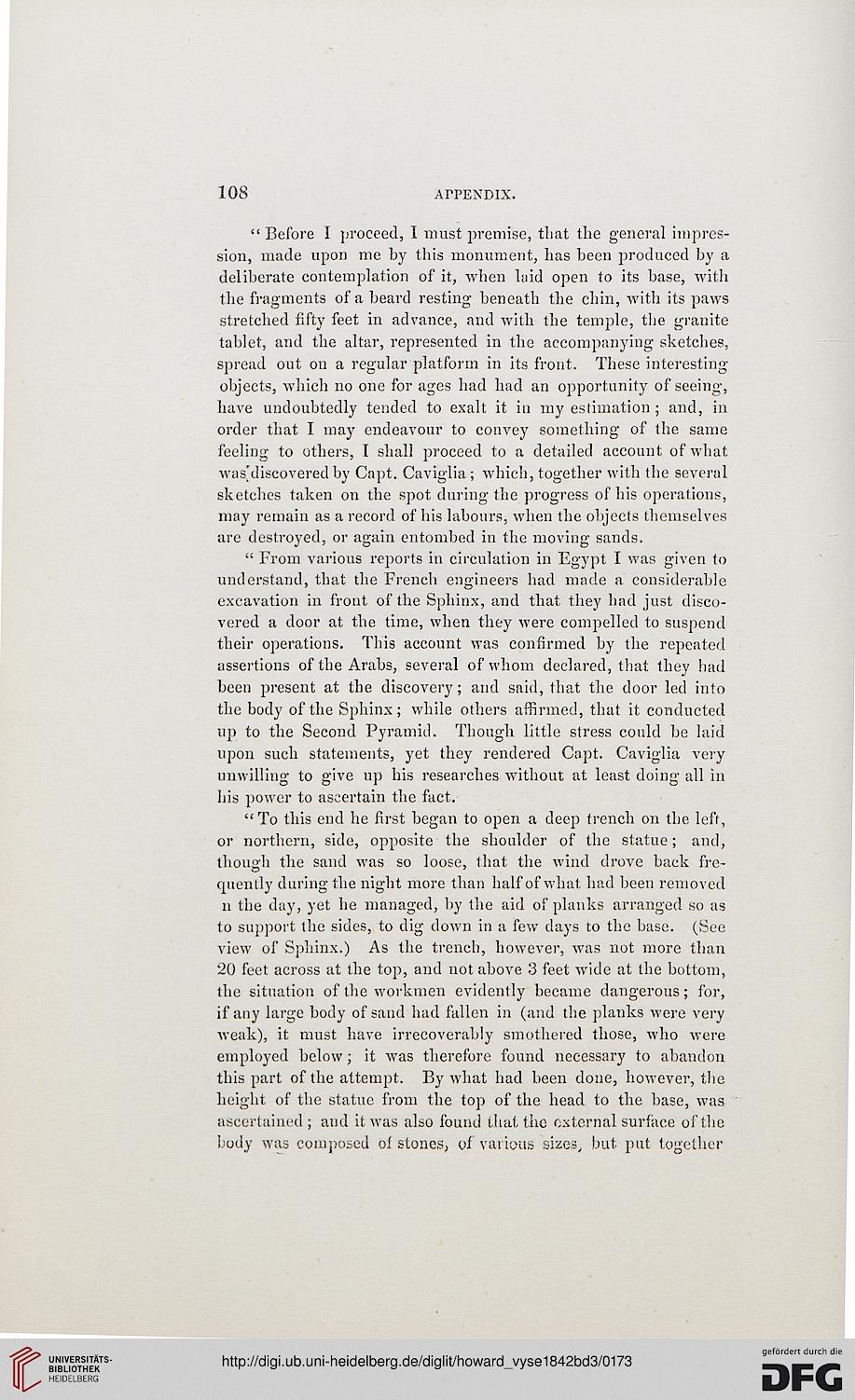 " Before I proceed, I must premise, that the general impres-
sion, made upon me by this monument, has been produced by a
deliberate contemplation of it, when laid open to its base, with
the fragments of a beard resting beneath the chin, with its paws
stretched fifty feet in advance, and with the temple, the granite
tablet, and the altar, represented in the accompanying sketches,
spread out on a regular platform in its front. These interesting
objects, which no one for ages had had an opportunity of seeing,
have undoubtedly tended to exalt it in my estimation; and, in
order that I may endeavour to convey something of the same
feeling to others, I shall proceed to a detailed account of what,
was'discovered by Capt. Caviglia; which, together with the several
sketches taken on the spot during the progress of his operations,
may remain as a record of his labours, when the objects themselves
are destroyed, or again entombed in the moving sands.

" From various reports in circulation in Egypt I was given to
understand, that the French engineers had made a considerable
excavation in front of the Sphinx, and that they had just disco-
vered a door at the time, when they were compelled to suspend
their operations. This account was confirmed by the repeated
assertions of the Arabs, several of whom declared, that they had
been present at the discovery; and snid, that the door led into
the body of the Sphinx; while others affirmed, that it conducted
up to the Second Pyramid. Though little stress could be laid
upon such statements, yet they rendered Capt. Caviglia very
unwilling to give up his researches without at least doing all in
his power to ascertain the fact.

"To this end he first began to open a deep trench on the left,
or northern, side, opposite the shoulder of the statue; and,
though the sand was so loose, that the wind drove back fre-
quently during the night more than half of what had been removed
11 the day, yet he managed, by the aid of planks arranged so as
to support the sides, to dig down in a few clays to the base. (Sec
view of Sphinx.) As the trench, however, was not more than
'20 feet across at the top, and not above 3 feet wide at the bottom,
the situation of the workmen evidently became dangerous; for,
if any large body of sand had fallen in (and the planks were very
weak), it must have irrecoverably smothered those, who were
employed below; it was therefore found necessary to abandon
this part of the attempt. By what had been done, however, the
height of the statue from the top of the head to the base, was
ascertained ; and it was also found that the external surface of the
body was composed of stones, of various sizes, hut put together