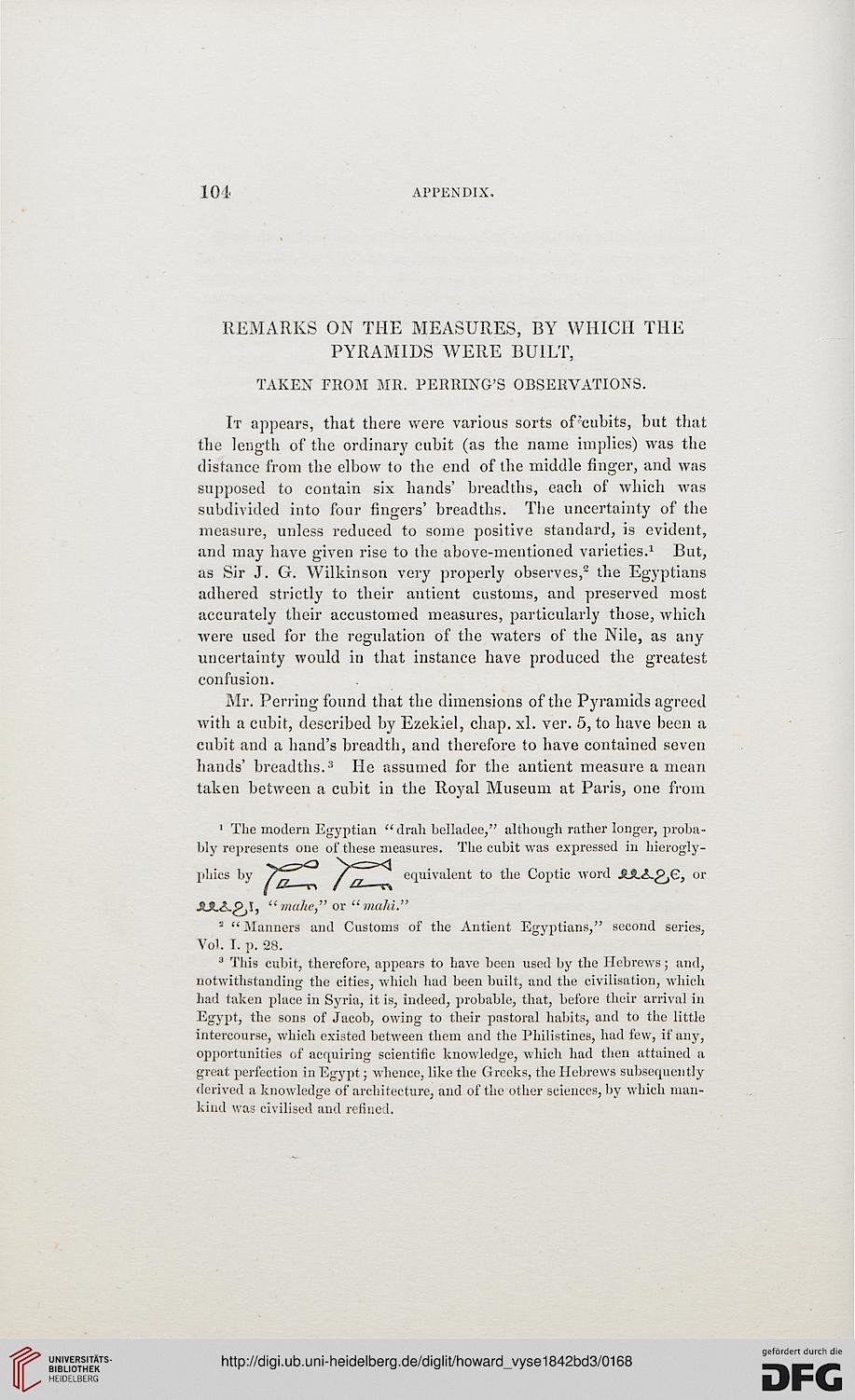 REMARKS ON THE MEASURES, BY WHICH THE
PYRAMIDS WERE BUILT,

It appears, that there were various sorts of "cubits, hut that
the length of the ordinary cubit (as the name implies) was the
distance from the elbow to the end of the middle finger, and was
supposed to contain six hands' breadths, each of which was
subdivided into four fingers' breadths. The uncertainty of the
measure, unless reduced to some positive standard, is evident,
and may have given rise to the above-mentioned varieties.1 But,
as Sir J. G. Wilkinson very properly observes,2 the Egyptians
adhered strictly to their antient customs, and preserved most
accurately their accustomed measures, particularly those, which
were used for the regulation of the waters of the Nile, as any
uncertainty would in that instance have produced the greatest
confusion.

Mr. Perring found that the dimensions of the Pyramids agreed
with a cubit, described by Ezekiel, chap. xl. ver. 5, to have been a
cubit and a hand's breadth, and therefore to have contained seven
hands' breadths.3 He assumed for the antient measure a mean
taken between a cubit in the Royal Museum at Paris, one from

1 The modern Egyptian "drah belladee," although rather longer, proba-
bly represents one of these measures. The cubit was expressed in hierogly-
phics by equivalent to the Coptic word XJLi.^G, or

3 This cubit, therefore, appears to have been used by the Hebrews; and,
notwithstanding the cities, which had been built, and the civilisation, which
had taken place in Syria, it is, indeed, probable, that, before their arrival in
Egypt, the sons of Jacob, owing to their pastoral habits, and to the little
intercourse, which existed between them and the Philistines, had few, if any,
opportunities of acquiring scientific knowledge, which had then attained a
great perfection in Egypt; whence, like the Greeks, the Hebrews subsequently
derived a knowledge of architecture, and of the other sciences, by which man-
kind was civilised and refined.