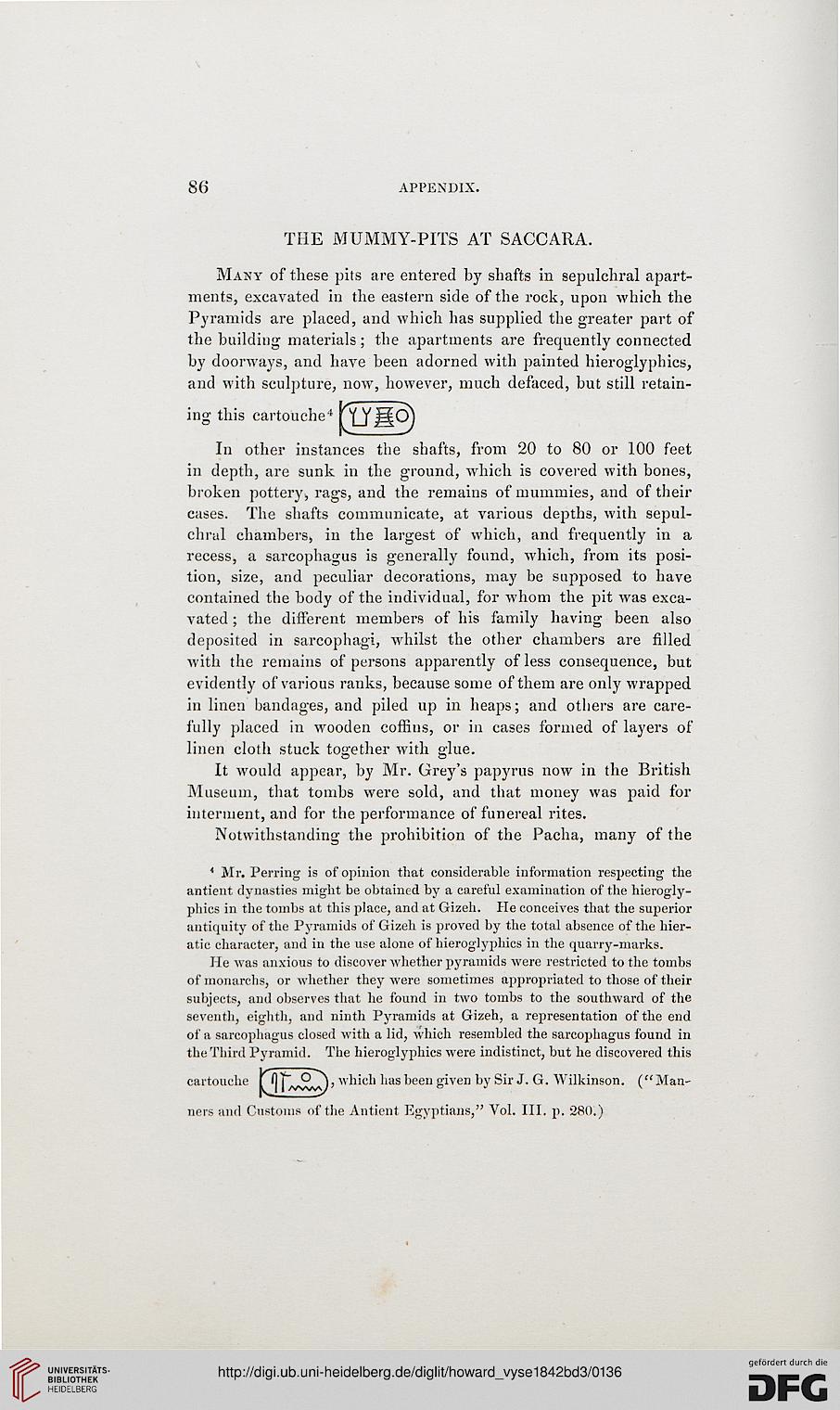 Many of these pits are entered by shafts in sepulchral apart-
ments, excavated in the eastern side of the rock, upon which the
Pyramids are placed, and which has supplied the greater part of
the building materials ; the apartments are frequently connected
by doorways, and have been adorned with painted hieroglyphics,
and with sculpture, now, however, much defaced, but still retain-

In other instances the shafts, from 20 to 80 or 100 feet
in depth, are sunk in the ground, which is covered with bones,
broken pottery, rags, and the remains of mummies, and of their
cases. The shafts communicate, at various depths, with sepul-
chral chambers, in the largest of which, and frequently in a
recess, a sarcophagus is generally found, which, from its posi-
tion, size, and peculiar decorations, may be sup230sed to have
contained the body of the individual, for whom the pit was exca-
vated ; the different members of his family having been also
deposited in sarcophagi, whilst the other chambers are filled
with the remains of persons apparently of less consequence, but
evidently of various ranks, because some of them are only wrapped
in linen bandages, and piled up in heaps; and others are care-
fully placed in wooden coffins, or in cases formed of layers of
linen cloth stuck together with o'lue.

It would appear, by Mr. Grey's papyrus now in the British
Museum, that tombs were sold, and that money was paid for
interment, and for the performance of funereal rites.

Notwithstanding the prohibition of the Pacha, many of the

4 Mr. Perring is of opinion that considerable information respecting the
antient dynasties might be obtained by a careful examination of the hierogly-
phics in the tombs at this place, and at Gizeh. He conceives that the superior
antiquity of the Pyramids of Gizeh is proved by the total absence of the hier-
atic character, and in the use alone of hieroglyphics in the quarry-marks.

He was anxious to discover whether pyramids were restricted to the tombs
of monarchs, or whether they were sometimes appropriated to those of their
subjects, and observes that lie found in two tombs to the southward of the
seventh, eighth, and ninth Pyramids at Gizeh, a representation of the end
of a sarcophagus closed with a lid, which resembled the sarcophagus found in
the Third Pyramid. The hieroglyphics were indistinct, but he discovered this