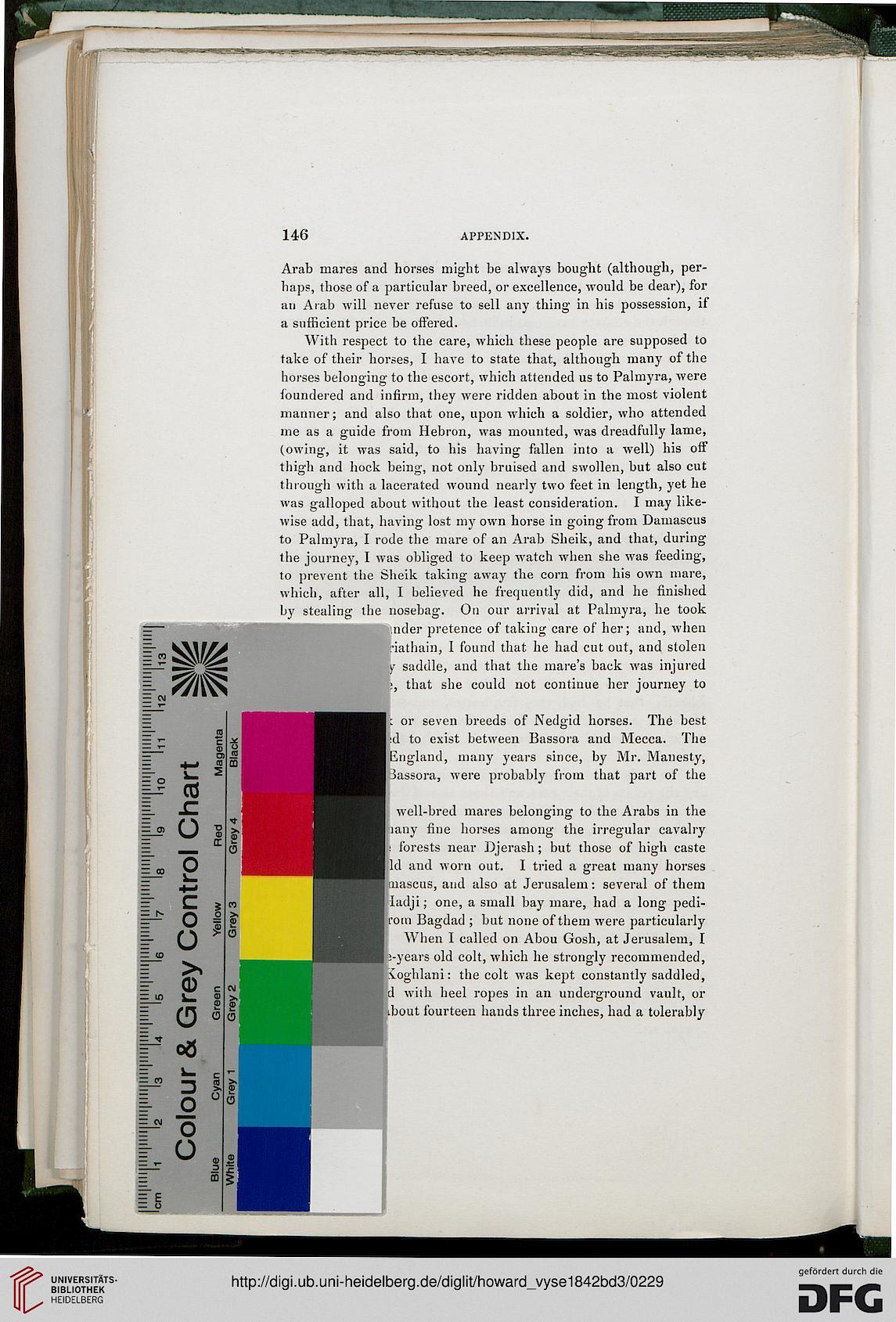 Arab mares and horses might be always bought (although, per-
haps, those of a particular breed, or excellence, would be dear), for
an Arab will never refuse to sell any thing in his possession, if
a sufficient price be offered.

With respect to the care, which these people are supposed to
take of their horses, I have to state that, although many of the
horses belonging to the escort, which attended us to Palmyra, were
foundered and infirm, they were ridden about in the most violent
manner; and also that one, upon which a soldier, who attended
me as a guide from Hebron, was mounted, was dreadfully lame,
(owing, it was said, to his having fallen into a well) his off
thigh and hock being, not only bruised and swollen, but also cut
through with a lacerated wound nearly two feet in length, yet he
was galloped about without the least consideration. I may like-
wise add, that, having lost my own horse in going from Damascus
to Palmyra, I rode the mare of an Arab Sheik, and that, during
the journey, I was obliged to keep watch when she was feeding,
to prevent the Sheik taking away the corn from his own mare,
which, after all, I believed he frequently did, and he finished
by stealing the nosebag. On our arrival at Palmyra, he took
nder pretence of taking care of her; and, when
iathain, I found that he had cut out, and stolen
saddle, and that the mare's back was injured
that she could not continue her journey to

: or seven breeds of !STedgid horses. The best
fd to exist between Bassoia and Mecca. The
['England, many years since, by Mr. Manesty,
Bassora, were probably from that part of the

i well-bred mares belonging to the Arabs in the
nany fine horses among the irregular cavalry
forests near Djerash ; but those of high caste
lid and worn out. I tried a great many horses
fcuascus, and also at Jerusalem: several of them
Hadji; one, a small bay mare, had a long pedi-
rom Bagdad ; but none of them were part icularly
\\ hen I called on Abou Gosh, at Jerusalem, I
-years old colt, which he strongly recommended,
Koghlani: the colt was kept constantly saddled,
|d with heel ropes in an underground vault, or
pout fourteen hands three inches, had a tolerably