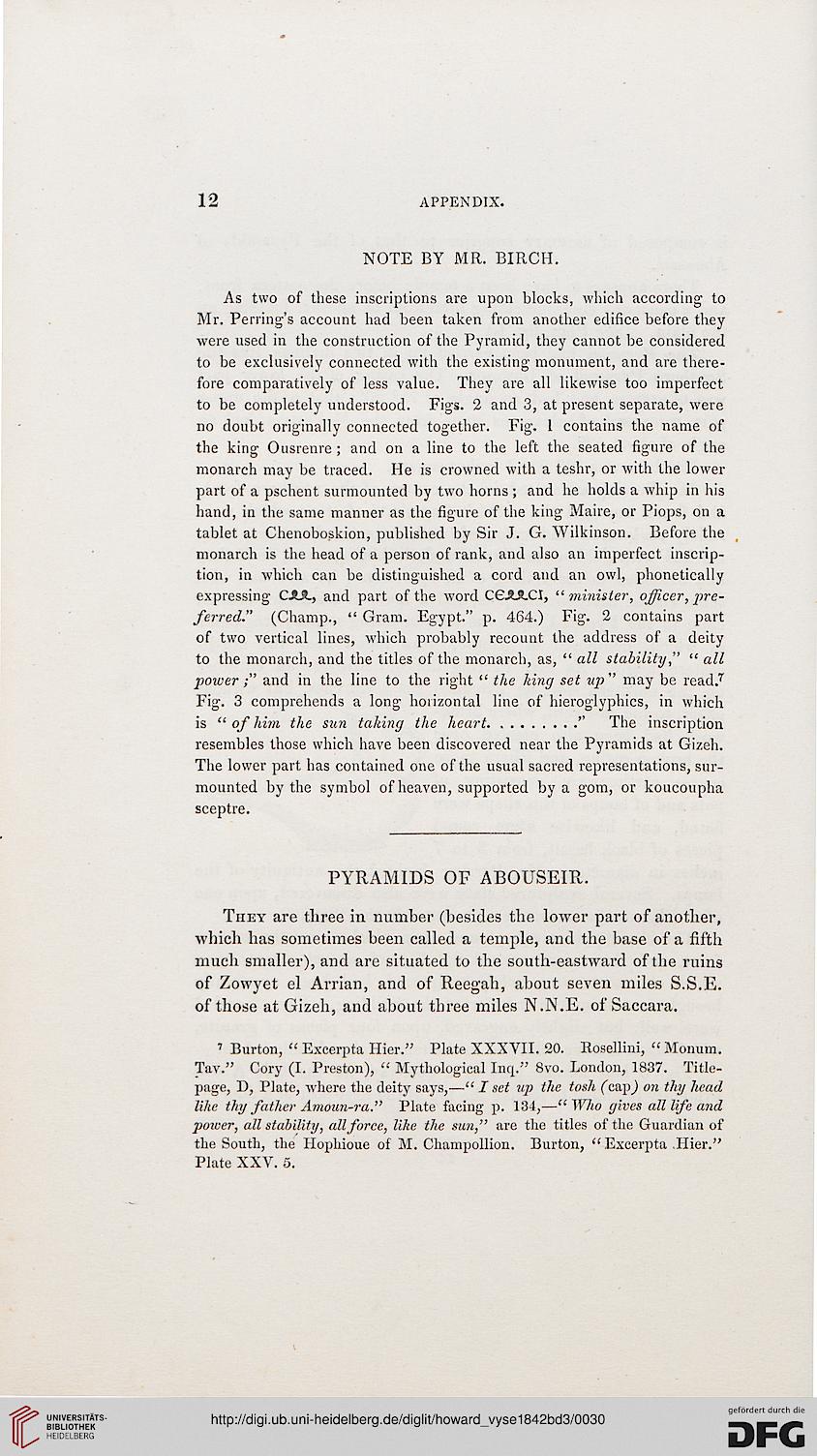 As two of these inscriptions are upon blocks, which according to
Mr. Perring's account had been taken from another edifice before they
were used in the construction of the Pyramid, they cannot be considered
to be exclusively connected with the existing monument, and are there-
fore comparatively of less value. They are all likewise too imperfect
to be completely understood. Figs. 2 and 3, at present separate, were
no doubt originally connected together. Fig. 1 contains the name of
the king Ousrenre ; and on a line to the left the seated figure of the
monarch may be traced. He is crowned with a teshr, or with the lower
part of a pschent surmounted by two horns ; and he holds a whip in his
hand, in the same manner as the figure of the king Maire, or Piops, on a
tablet at Chenoboskion, published by Sir J. G. Wilkinson. Before the
monarch is the head of a person of rank, and also an imperfect inscrip-
tion, in which can be distinguished a cord and an owl, phonetically
expressing CA&., and part of the word C6A5.CI, "minister, officer, pre-
ferred." (Champ., " Gram. Egypt." p. 464.) Fig. 2 contains part
of two vertical lines, which probably recount the address of a deity
to the monarch, and the titles of the monarch, as, " all stability," " all
power;" and in the line to the right " the king set up" may be read.7
Fig. 3 comprehends a long hoiizontal line of hieroglyphics, in which

resembles those which have been discovered near the Pyramids at Gizch.
The lower part has contained one of the usual sacred representations, sur-
mounted by the symbol of heaven, supported by a gom, or koucoupha
sceptre.

They are three in number (besides the lower part of another,
which has sometimes been called a temple, and the base of a fifth
much smaller), and are situated to the south-eastward of the ruins
of Zowyet el Arrian, and of Reegah, about seven miles S.S.E.
of those at Gizeh, and about three miles N.N.E. of Saccara.