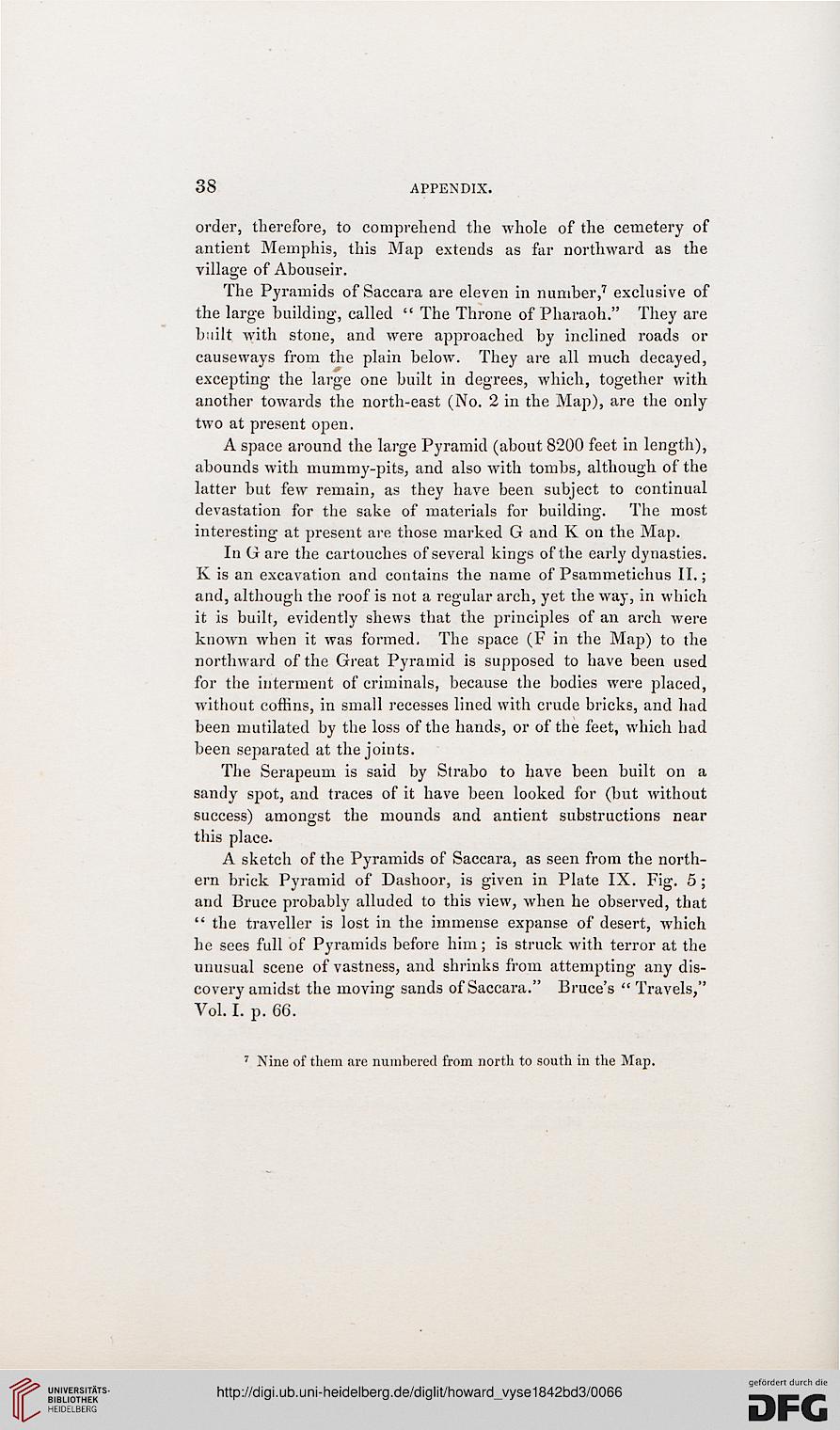 order, therefore, to comprehend the whole of the cemetery of
antient Memphis, this Map extends as far northward as the
village of Abouseir.

The Pyramids of Saccara are eleven in number,7 exclusive of
the large building, called " The Throne of Pharaoh." They are
built with stone, and were approached by inclined roads or
causeways from the plain below. They are all much decayed,
excepting the large one built in degrees, which, together with
another towards the north-east (No. 2 in the Map), are the only
two at present open.

A space around the large Pyramid (about 8200 feet in length),
abounds with mummy-pits, and also with tombs, although of the
latter but few remain, as they have been subject to continual
devastation for the sake of materials for building. The most
interesting at present are those marked G and K on the Map.

In G are the cartouches of several kings of the early dynasties.
K is an excavation and contains the name of Psammetichus II.;
and, although the roof is not a regular arch, yet the way, in which
it is built, evidently shews that the principles of an arch were
known when it was formed. The space (F in the Map) to the
northward of the Great Pyramid is supposed to have been used
for the interment of criminals, because the bodies were placed,
without coffins, in small recesses lined with crude bricks, and had
been mutilated by the loss of the bauds, or of the feet, which had
been separated at the joints.

The Serapeum is said by Strabo to have been built on a
sandy spot, and traces of it have been looked for (but without
success) amongst the mounds and antient substructions near
this place.

A sketch of the Pyramids of Saccara, as seen from the north-
ern brick Pyramid of Dashoor, is given in Plate IX. Fig. 5 ;
and Bruce probably alluded to this view, when he observed, that
" the traveller is lost in the immense expanse of desert, which
he sees full of Pyramids before him; is struck with terror at the
unusual scene of vastness, and shrinks from attempting any dis-
covery amidst the moving sands of Saccara." Bruce's " Travels,"
Vol. I. p. 66.

7 Nine of them are numbered from north to south in the Map.