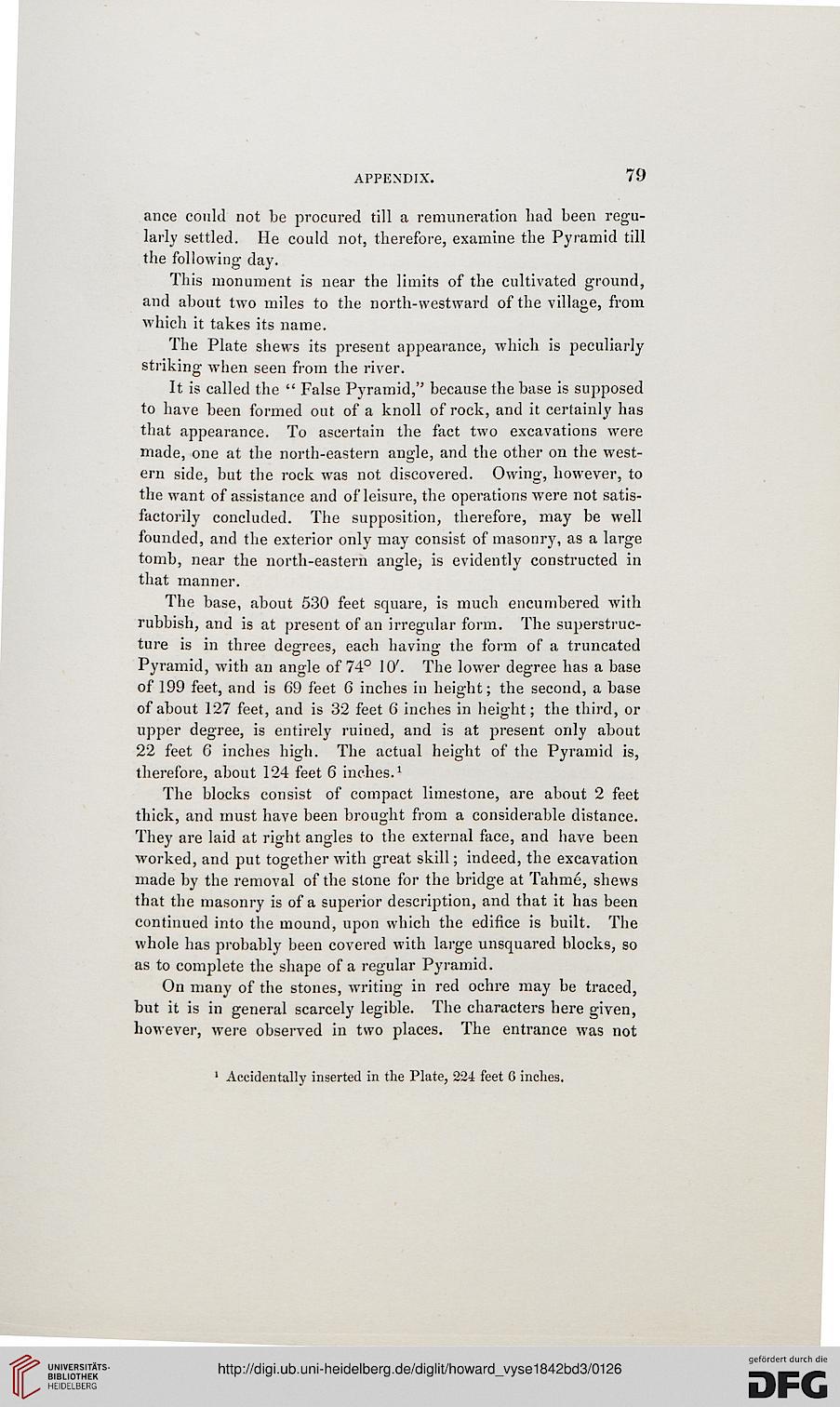 ance could not be procured till a remuneration had been regu-
larly settled. He could not, therefore, examine the Pyramid till
the following day.

This monument is near the limits of the cultivated ground,
and about two miles to the north-westward of the village, from
w hich it takes its name.

The Plate shews its present appearance, which is peculiarly
striking when seen from the river.

It is called the " False Pyramid," because the base is supposed
to have been formed out of a knoll of rock, and it certainly has
that appearance. To ascertain the fact two excavations were
made, one at the north-eastern angle, and the other on the west-
ern side, but the rock was not discovered. Owing, however, to
the want of assistance and of leisure, the operations were not satis-
factorily concluded. The supposition, therefore, may be well
founded, and the exterior only may consist of masonry, as a large
tomb, near the north-eastern angle, is evidently constructed in
that manner.

The base, about 530 feet square, is much encumbered with
rubbish, and is at present of an irregular form. The superstruc-
ture is in three degrees, each having the form of a truncated
Pyramid, with an angle of 74° IC. The lower degree has a base
of 199 feet, and is 09 feet 0 inches in height; the second, a base
of about 1*27 feet, and is 32 feet 6 inches in height; the third, or
upper degree, is entirely ruined, and is at present only about
22 feet 0 inches high. The actual height of the Pyramid is,
therefore, about 124 feet 0 inches.1

The blocks consist of compact limestone, are about 2 feet
thick, and must have been brought from a considerable distance.
They are laid at right angles to the external face, and have been
worked, and put together with great skill; indeed, the excavation
made by the removal of the stone for the bridge at Tahme, shews
that the masonry is of a superior description, and that it has been
continued into the mound, upon which the edifice is built. The
whole has probably been covered with large unsquared blocks, so
as to complete the shape of a regular Pyramid.

On many of the stones, writing in red ochre may be traced,
but it is in general scarcely legible. The characters here given,
however, were observed in two places. The entrance was not