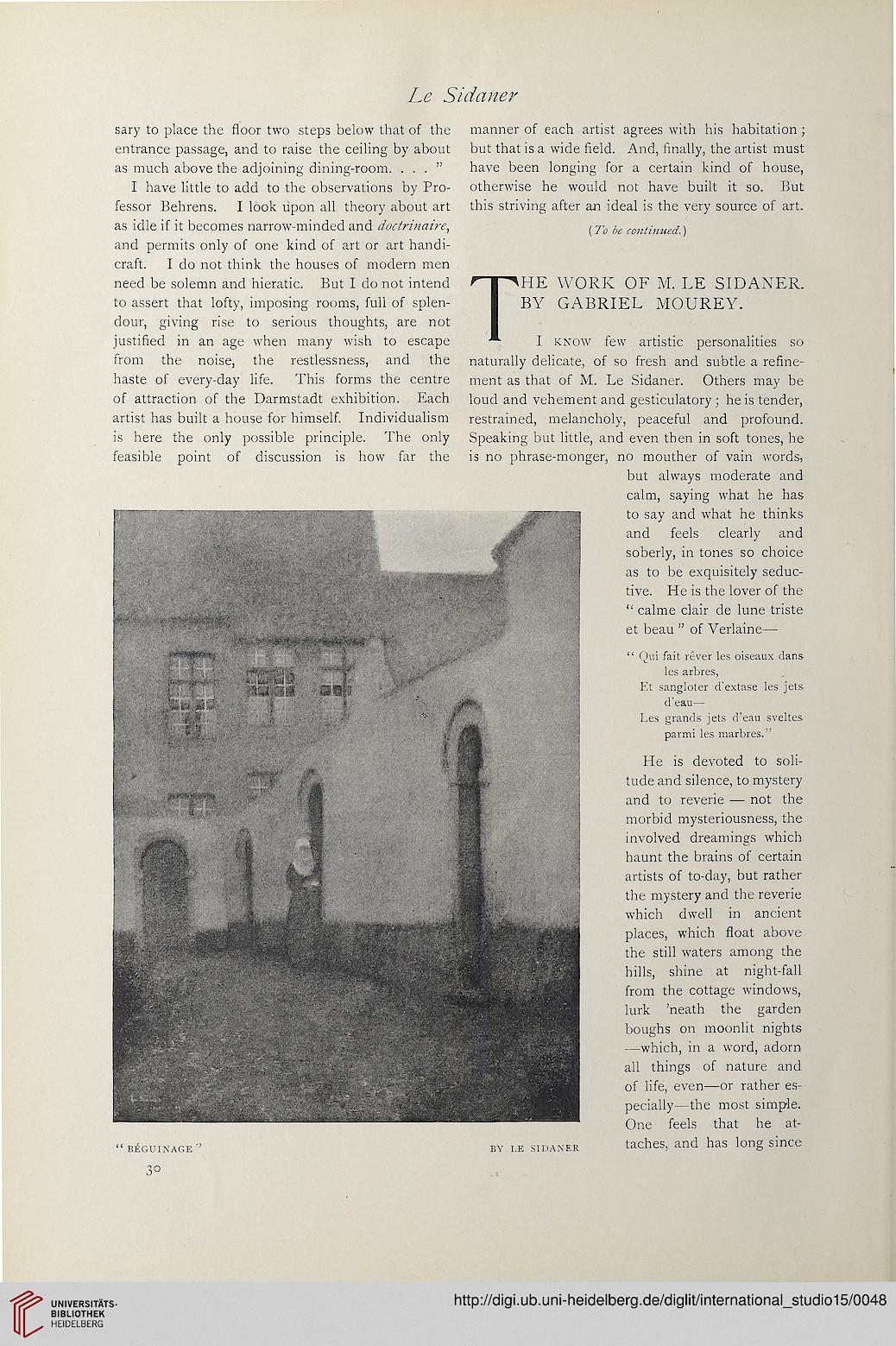 sary to place the floor two steps below that of the
entrance passage, and to raise the ceiling by about
as much above the adjoining dining-room. ...”

I have little to add to the observations by Pro-
fessor Behrens. I look upon all theory about art
as idle if it becomes narrow-minded and doctrinaire,
and permits only of one kind of art or art handi-
craft. I do not think the houses of modern men
need be solemn and hieratic. But I do not intend
to assert that lofty, imposing rooms, full of splen-
dour, giving rise to serious thoughts, are not
justified in an age when many wish to escape
from the noise, the restlessness, and the
haste of every-day life. This forms the centre
of attraction of the Darmstadt exhibition. Each
artist has built a house for himself. Individualism
is here the only possible principle. The only
feasible point of discussion is how far the


manner of each artist agrees with his habitation;
but that is a wide field. And, finally, the artist must
have been longing for a certain kind of house,
otherwise he would not have built it so. But
this striving after an ideal is the very source of art.

HE WORK OF M. LE SIDANER.
BY GABRIEL MOUREY.

I KNOW few artistic personalities so
naturally delicate, of so fresh and subtle a refine-
ment as that of M. Le Sidaner. Others may be
loud and vehement and gesticulatory ; he is tender,
restrained, melancholy, peaceful and profound.
Speaking but little, and even then in soft tones, he
is no phrase-monger, no mouther of vain words,
but always moderate and
calm, saying what he has
to say and what he thinks
and feels clearly and
soberly, in tones so choice
as to be exquisitely seduc-
tive. He is the lover of the
“ calme clair de lune triste
et beau ” of Verlaine—

He is devoted to soli-
tude and silence, to mystery
and to reverie — not the
morbid mysteriousness, the
involved dreamings which
haunt the brains of certain
artists of to-day, but rather
the mystery and the reverie
which dwell in ancient
places, which float above
the still waters among the
hills, shine at night-fall
from the cottage windows,
lurk ’neath the garden
boughs on moonlit nights
—which, in a word, adorn
all things of nature and
of life, even—or rather es-
pecially—the most simple.
One feels that he at-
by le sidaner taches, and has long since