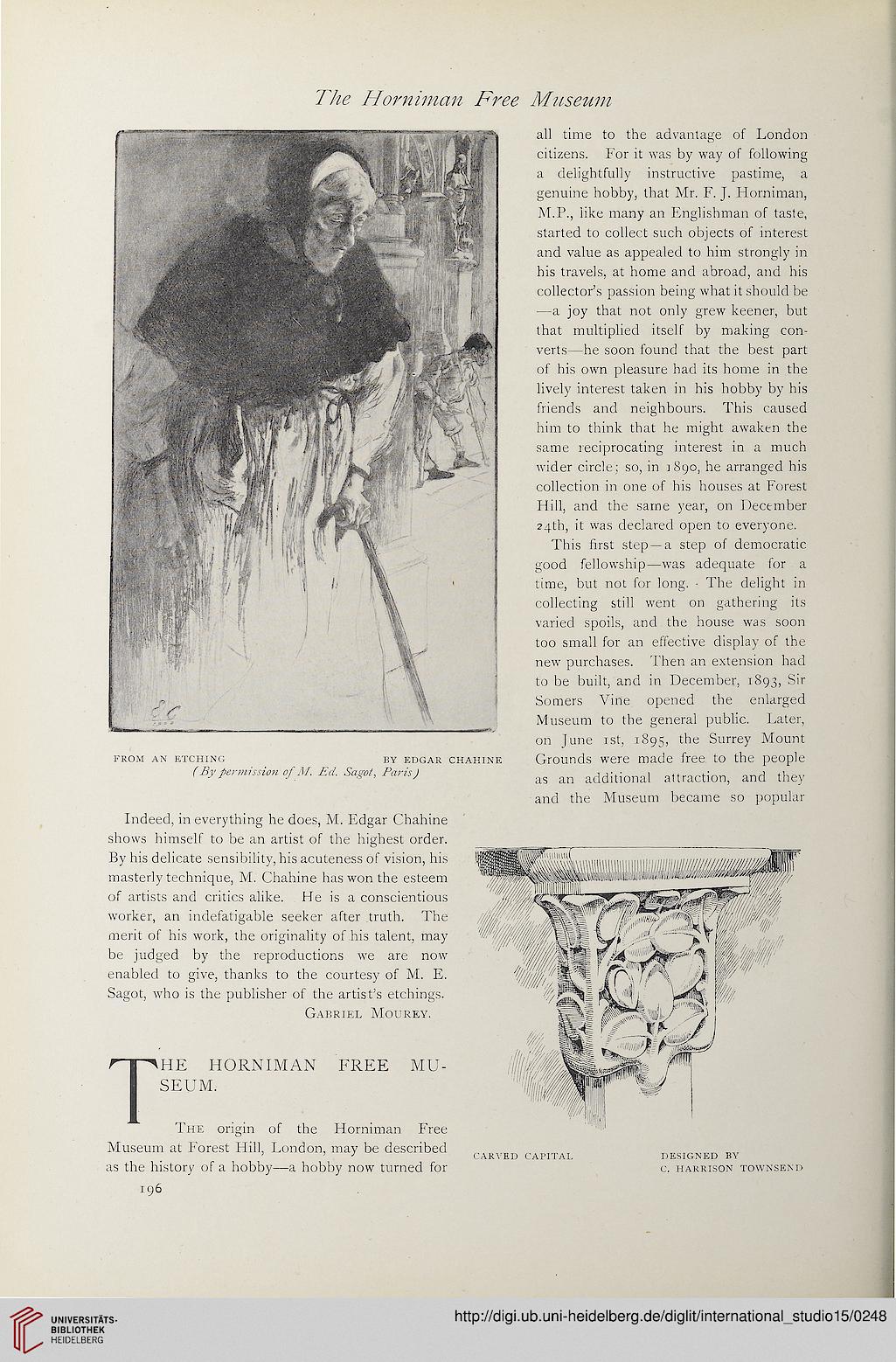 FROM AN ETCHING BY EDGAR CHAHINE

all time to the advantage of London
citizens. For it was by way of following
a delightfully instructive pastime, a
genuine hobby, that Mr. F. J. Horniman,
M.P., like many an Englishman of taste,
started to collect such objects of interest
and value as appealed to him strongly in
his travels, at home and abroad, and his
collector’s passion being what it should be
—a joy that not only grew keener, but
that multiplied itself by making con-
verts—he soon found that the best part
of his own pleasure had its home in the
lively interest taken in his hobby by his
friends and neighbours. This caused
him to think that he might awaken the
same reciprocating interest in a much
wider circle; so, in 1890, he arranged his
collection in one of his houses at Forest
Hill, and the same year, on December
24th, it was declared open to everyone.

This first step —a step of democratic
good fellowship—was adequate for a
time, but not for long. - The delight in
collecting still went on gathering its
varied spoils, and the house was soon
too small for an effective display of the
new purchases. Then an extension had
to be built, and in December, 1893, Sir
Somers Vine opened the enlarged
Museum to the general public. Later,
on June 1st, 1895, the Surrey Mount
Grounds were made free to the people
as an additional attraction, and they
and the Museum became so popular

Indeed, in everything he does, M. Edgar Chahine
shows himself to be an artist of the highest order.
By his delicate sensibility, his acuteness of vision, his
masterly technique, M. Chahine has won the esteem
of artists and critics alike. He is a conscientious
worker, an indefatigable seeker after truth. The
merit of his work, the originality of his talent, may
be judged by the reproductions we are now
enabled to give, thanks to the courtesy of M. E.
Sagot, who is the publisher of the artist’s etchings.

The origin of the Horniman Free
Museum at Forest Hill, London, may be described
as the history of a hobby—a hobby now turned for
196