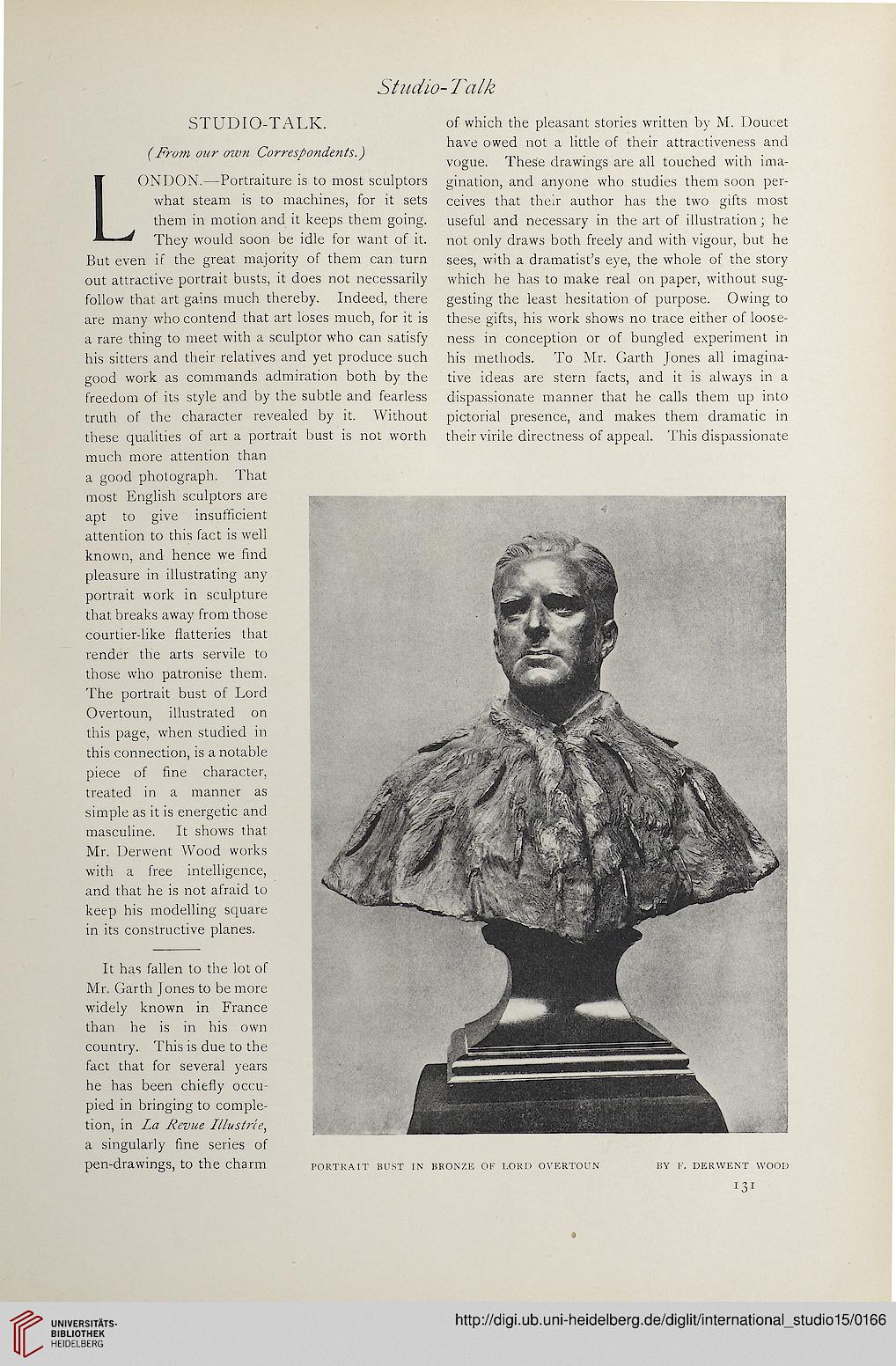 It has fallen to the lot of
Mr. Garth Jones to be more
widely known in France
than he is in his own
country. This is due to the
fact that for several years
he has been chiefly occu-
pied in bringing to comple-
tion, in La Revue Illustrie,
a singularly fine series of
pen-drawings, to the charm portrait bust in bronze of lord overtoun by f. derwent wood

LONDON.—Portraiture is to most sculptors
what steam is to machines, for it sets
them in motion and it keeps them going.
They would soon be idle for want of it.
But even if the great majority of them can turn
out attractive portrait busts, it does not necessarily
follow that art gains much thereby. Indeed, there
are many who contend that art loses much, for it is
a rare thing to meet with a sculptor who can satisfy
his sitters and their relatives and yet produce such
good work as commands admiration both by the
freedom of its style and by the subtle and fearless
truth of the character revealed by it. Without
these qualities of art a portrait bust is not worth
much more attention than
a good photograph. That
most English sculptors are
apt to give insufficient
attention to this fact is well
known, and hence we find
pleasure in illustrating any
portrait work in sculpture
that breaks away from those
courtier-like flatteries that
render the arts servile to
those who patronise them.

The portrait bust of Lord
Overtoun, illustrated on
this page, when studied in
this connection, is a notable
piece of fine character,
treated in a manner as
simple as it is energetic and
masculine. It shows that
Mr. Derwent Wood works
with a free intelligence,
and that he is not afraid to
keep his modelling square
in its constructive planes.

of which the pleasant stories written by M. Doucet
have owed not a little of their attractiveness and
vogue. These drawings are all touched with ima-
gination, and anyone who studies them soon per-
ceives that their author has the two gifts most
useful and necessary in the art of illustration; he
not only draws both freely and with vigour, but he
sees, with a dramatist’s eye, the whole of the story
wrhich he has to make real on paper, without sug-
gesting the least hesitation of purpose. Owing to
these gifts, his work shows no trace either of loose-
ness in conception or of bungled experiment in
his methods. To Mr. Garth Jones all imagina-
tive ideas are stern facts, and it is always in a
dispassionate manner that he calls them up into
pictorial presence, and makes them dramatic in
their virile directness of appeal. This dispassionate