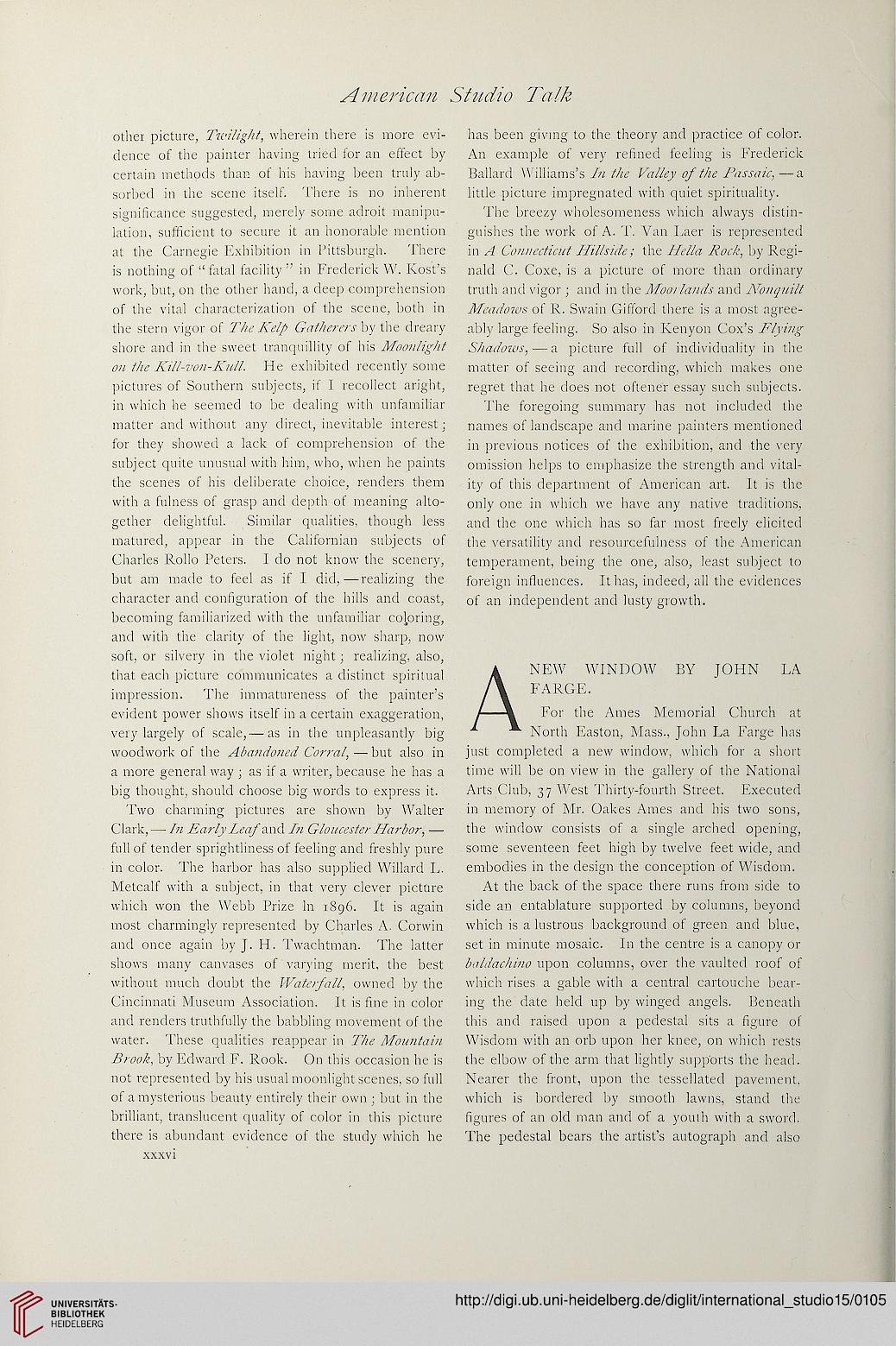 other picture, Twilight, wherein there is more evi-
dence of the painter having tried for an effect by
certain methods than of his having been truly ab-
sorbed in the scene itself. There is no inherent
significance suggested, merely some adroit manipu-
lation, sufficient to secure it an honorable mention
at the Carnegie Exhibition in Pittsburgh. There
is nothing of “fatal facility” in Frederick W. Kost’s
work, but, on the other hand, a deep comprehension
of the vital characterization of the scene, both in
the stern vigor of The Kelp Gatherers by the dreary
shore and in the sweet tranquillity of his Moonlight
on the Kill-von-Kull. He exhibited recently some
pictures of Southern subjects, if I recollect aright,
in which he seemed to be dealing with unfamiliar
matter and without any direct, inevitable interest;
for they showed a lack of comprehension of the
subject quite unusual with him, who, when he paints
the scenes of his deliberate choice, renders them
with a fulness of grasp and depth of meaning alto-
gether delightful. Similar qualities, though less
matured, appear in the Californian subjects of
Charles Rollo Peters. I do not know the scenery,
but am made to feel as if I did,—realizing the
character and configuration of the hills and coast,
becoming familiarized with the unfamiliar coloring,
and with the clarity of the light, now sharp, now
soft, or silvery in the violet night; realizing, also,
that each picture communicates a distinct spiritual
impression. The immatureness of the painter’s
evident power shows itself in a certain exaggeration,
very largely of scale,— as in the unpleasantly big
woodwork of the Abandoned Corral, — but also in
a more general way ; as if a writer, because he has a
big thought, should choose big words to express it.

Two charming pictures are shown by Walter
Clark, — In Early Leaf and In Gloucester Harbor, —
full of tender sprightliness of feeling and freshly pure
in color. The harbor has also supplied Willard L.
Metcalf with a subject, in that very clever picture
which won the Webb Prize In 1896. It is again
most charmingly represented by Charles A. Corwin
and once again by J. H. Twachtman. The latter
shows many canvases of varying merit, the best
without much doubt the Waterfall, owned by the
Cincinnati Museum Association. It is fine in color
and renders truthfully the babbling movement of the
water. These qualities reappear in The Mountain
Brook, by Edward F. Rook. On this occasion he is
not represented by his usual moonlight scenes, so full
of a mysterious beauty entirely their own ; but in the
brilliant, translucent quality of color in this picture
there is abundant evidence of the study which he

has been giving to the theory and practice of color.
An example of very refined feeling is Frederick
Ballard Williams’s In the Valley of the Passaic, —a
little picture impregnated with quiet spirituality.

The breezy wholesomeness which always distin-
guishes the work of A. T. Van Laer is represented
in A Connecticut Hillside; the Hella Rock, by Regi-
nald C. Coxe, is a picture of more than ordinary
truth and vigor ; and in the Moorlands and ATonqu.ilt
Meadows of R. Swain Gifford there is a most agree-
ably large feeling. So also in Kenyon Cox’s Flying
Shadows, — a picture full of individuality in the
matter of seeing and recording, which makes one
regret that he does not oftener essay such subjects.

The foregoing summary has not included the
names of landscape and marine painters mentioned
in previous notices of the exhibition, and the very
omission helps to emphasize the strength and vital-
ity of this department of American art. It is the
only one in which we have any native traditions,
and the one which has so far most freely elicited
the versatility and resourcefulness of the American
temperament, being the one, also, least subject to
foreign influences. It has, indeed, all the evidences
of an independent and lusty growth.

For the Ames Memorial Church at
North Easton, Mass., John La Farge has
just completed a new window, which for a short
time will be on view in the gallery of the National
Arts Club, 37 West Thirty-fourth Street. Executed
in memory of Mr. Oakes Ames and his two sons,
the window consists of a single arched opening,
some seventeen feet high by twelve feet wide, and
embodies in the design the conception of Wisdom.

At the back of the space there runs from side to
side an entablature supported by columns, beyond
which is a lustrous background of green and blue,
set in minute mosaic. In the centre is a canopy or
baldachino upon columns, over the vaulted roof of
which rises a gable with a central cartouche bear-
ing the date held up by winged angels. Beneath
this and raised upon a pedestal sits a figure of
Wisdom with an orb upon her knee, on which rests
the elbow of the arm that lightly supports the head.
Nearer the front, upon the tessellated pavement,
which is bordered by smooth lawns, stand the
figures of an old man and of a youth with a sword.
The pedestal bears the artist’s autograph and also