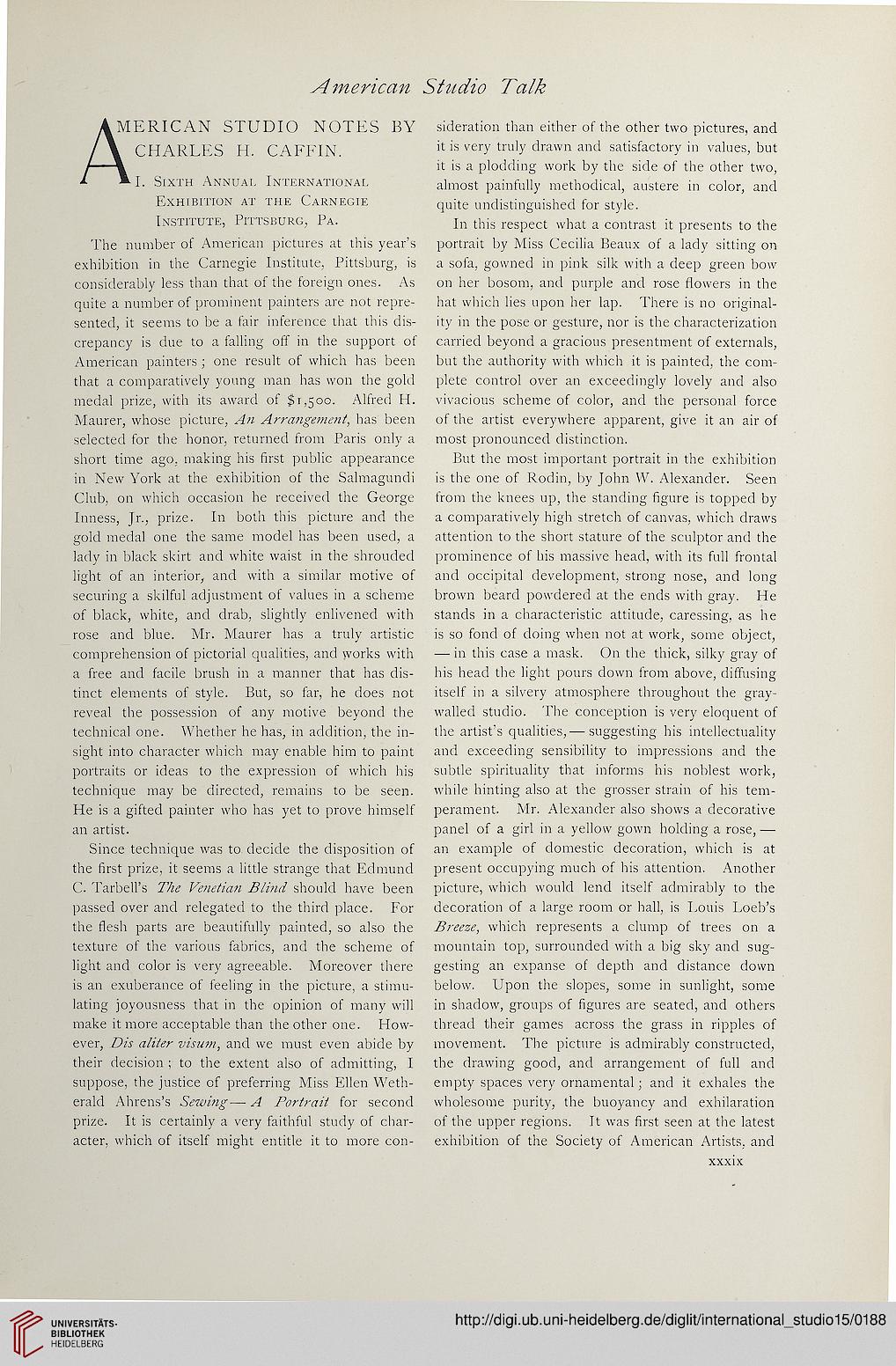 The number of American pictures at this year’s
exhibition in the Carnegie Institute, Pittsburg, is
considerably less than that of the foreign ones. As
quite a number of prominent painters are not repre-
sented, it seems to be a fair inference that this dis-
crepancy is due to a falling off in the support of
American painters ; one result of which has been
that a comparatively young man has won the gold
medal prize, with its award of $1,500. Alfred H.
Maurer, whose picture, An Arrangement, has been
selected for the honor, returned from Paris only a
short time ago, making his first public appearance
in New York at the exhibition of the Salmagundi
Club, on which occasion he received the George
Inness, Jr., prize. In both this picture and the
gold medal one the same model has been used, a
lady in black skirt and white waist in the shrouded
light of an interior, and with a similar motive of
securing a skilful adjustment of values in a scheme
of black, white, and drab, slightly enlivened with
rose and blue. Mr. Maurer has a truly artistic
comprehension of pictorial qualities, and works with
a free and facile brush in a manner that has dis-
tinct elements of style. But, so far, he does not
reveal the possession of any motive beyond the
technical one. Whether he has, in addition, the in-
sight into character which may enable him to paint
portraits or ideas to the expression of which his
technique may be directed, remains to be seen.
He is a gifted painter who has yet to prove himself
an artist.

Since technique was to decide the disposition of
the first prize, it seems a little strange that Edmund
C. Tarbell’s The Venetian Blind should have been
passed over and relegated to the third place. For
the flesh parts are beautifully painted, so also the
texture of the various fabrics, and the scheme of
light and color is very agreeable. Moreover there
is an exuberance of feeling in the picture, a stimu-
lating joyousness that in the opinion of many will
make it more acceptable than the other one. How-
ever, Dis aliter visum, and we must even abide by
their decision ; to the extent also of admitting, I
suppose, the justice of preferring Miss Ellen Weth-
erald Ahrens’s Sewing— A Portrait for second
prize. It is certainly a very faithful study of char-
acter, which of itself might entitle it to more con-

sideration than either of the other two pictures, and
it is very truly drawn and satisfactory in values, but
it is a plodding work by the side of the other two,
almost painfully methodical, austere in color, and
quite undistinguished for style.

In this respect what a contrast it presents to the
portrait by Miss Cecilia Beaux of a lady sitting on
a sofa, gowned in pink silk with a deep green bow
on her bosom, and purple and rose flowers in the
hat which lies upon her lap. There is no original-
ity in the pose or gesture, nor is the characterization
carried beyond a gracious presentment of externals,
but the authority with which it is painted, the com-
plete control over an exceedingly lovely and also
vivacious scheme of color, and the personal force
of the artist everywhere apparent, give it an air of
most pronounced distinction.

But the most important portrait in the exhibition
is the one of Rodin, by John W. Alexander. Seen
from the knees up, the standing figure is topped by
a comparatively high stretch of canvas, which draws
attention to the short stature of the sculptor and the
prominence of his massive head, with its full frontal
and occipital development, strong nose, and long
brown beard powdered at the ends with gray. He
stands in a characteristic attitude, caressing, as he
is so fond of doing when not at work, some object,
— in this case a mask. On the thick, silky gray of
his head the light pours down from above, diffusing
itself in a silvery atmosphere throughout the gray-
walled studio. The conception is very eloquent of
the artist’s qualities,— suggesting his intellectuality
and exceeding sensibility to impressions and the
subtle spirituality that informs his noblest work,
while hinting also at the grosser strain of his tem-
perament. Mr. Alexander also shows a decorative
panel of a girl in a yellow gown holding a rose, —
an example of domestic decoration, which is at
present occupying much of his attention. Another
picture, which would lend itself admirably to the
decoration of a large room or hall, is Louis Loeb’s
Breeze, which represents a clump of trees on a
mountain top, surrounded with a big sky and sug-
gesting an expanse of depth and distance down
below. Upon the slopes, some in sunlight, some
in shadow, groups of figures are seated, and others
thread their games across the grass in ripples of
movement. The picture is admirably constructed,
the drawing good, and arrangement of full and
empty spaces very ornamental; and it exhales the
wholesome purity, the buoyancy and exhilaration
of the upper regions. It was first seen at the latest
exhibition of the Society of American Artists, and