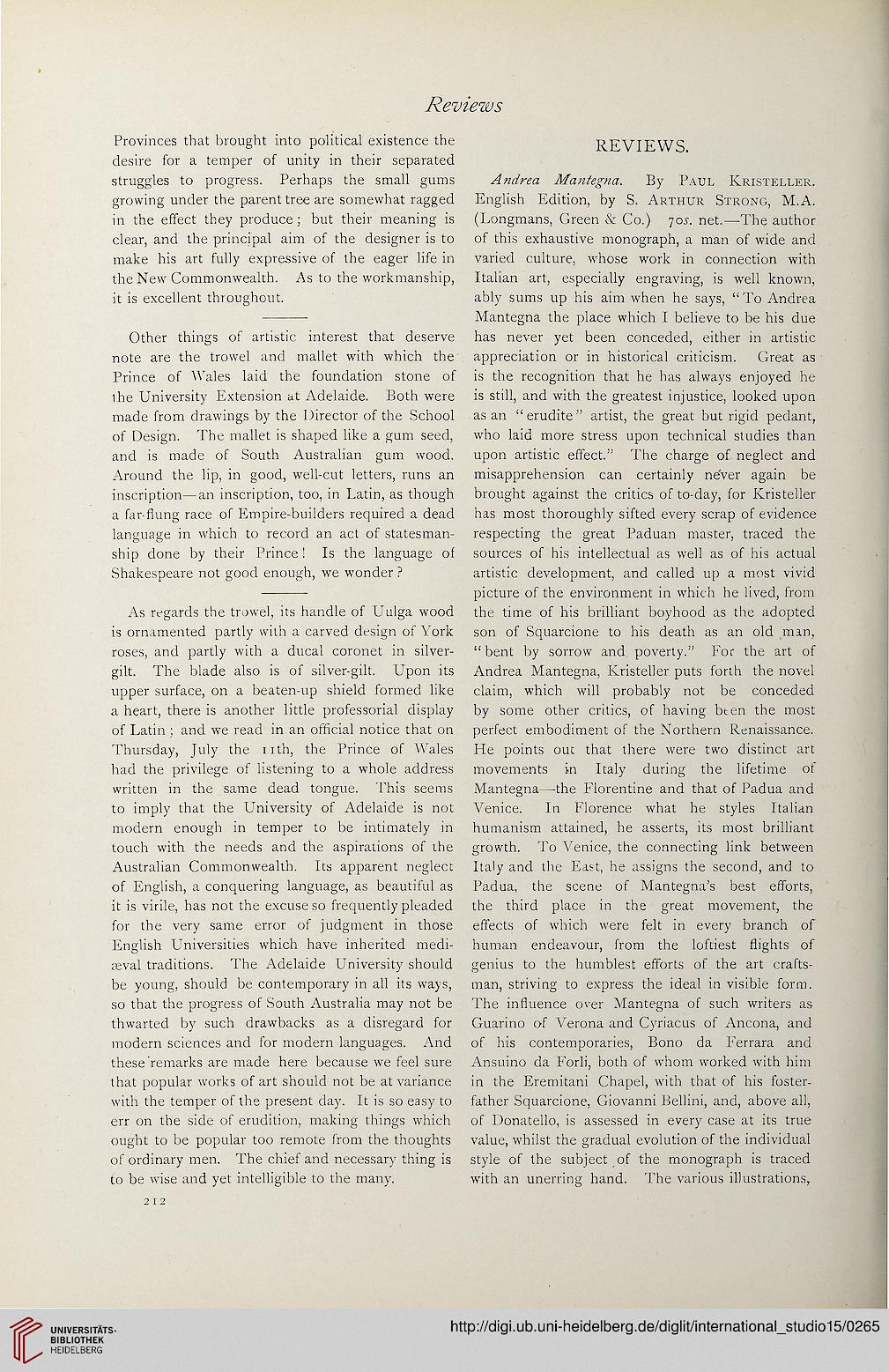 Provinces that brought into political existence the
desire for a temper of unity in their separated
struggles to progress. Perhaps the small gums
growing under the parent tree are somewhat ragged
in the effect they produce; but their meaning is
clear, and the principal aim of the designer is to
make his art fully expressive of the eager life in
the New Commonwealth. As to the workmanship,
it is excellent throughout.

Other things of artistic interest that deserve
note are the trowel and mallet with which the
Prince of Wales laid the foundation stone of
the University Extension at Adelaide. Both were
made from drawings by the Director of the School
of Design. The mallet is shaped like a gum seed,
and is made of South Australian gum wood.
Around the lip, in good, well-cut letters, runs an
inscription—an inscription, too, in Latin, as though
a far-flung race of Empire-builders required a dead
language in which to record an act of statesman-
ship done by their Prince! Is the language of
Shakespeare not good enough, we wonder ?

As regards the trowel, its handle of Uulga wood
is ornamented partly with a carved design of York
roses, and partly with a ducal coronet in silver-
gilt. The blade also is of silver-gilt. Upon its
upper surface, on a beaten-up shield formed like
a heart, there is another little professorial display
of Latin; and we read in an official notice that on
Thursday, July the nth, the Prince of Wales
had the privilege of listening to a whole address
written in the same dead tongue. This seems
to imply that the University of Adelaide is not
modern enough in temper to be intimately in
touch with the needs and the aspirations of the
Australian Commonwealth. Its apparent neglect
of English, a conquering language, as beautiful as
it is virile, has not the excuse so frequently pleaded
for the very same error of judgment in those
English Universities which have inherited medi-
aeval traditions. The Adelaide University should
be young, should be contemporary in all its ways,
so that the progress of South Australia may not be
thwarted by such drawbacks as a disregard for
modern sciences and for modern languages. And
these remarks are made here because we feel sure
that popular works of art should not be at variance
with the temper of the present day. It is so easy to
err on the side of erudition, making things which
ought to be popular too remote from the thoughts
of ordinary men. The chief and necessary thing is
to be wise and yet intelligible to the many.

Andrea Mantegna. By Paul Kristeller.
English Edition, by S. Arthur Strong, M.A.
(Longmans, Green & Co.) 70s. net.—The author
of this exhaustive monograph, a man of wide and
varied culture, whose work in connection with
Italian art, especially engraving, is well known,
ably sums up his aim when he says, “To Andrea
Mantegna the place which I believe to be his due
has never yet been conceded, either in artistic
appreciation or in historical criticism. Great as
is the recognition that he has always enjoyed he
is still, and with the greatest injustice, looked upon
as an “ erudite ” artist, the great but rigid pedant,
who laid more stress upon technical studies than
upon artistic effect.” The charge of neglect and
misapprehension can certainly never again be
brought against the critics of to-day, for Kristeller
has most thoroughly sifted every scrap of evidence
respecting the great Paduan master, traced the
sources of his intellectual as well as of his actual
artistic development, and called up a most vivid
picture of the environment in which he lived, from
the time of his brilliant boyhood as the adopted
son of Squarcione to his death as an old man,
“ bent by sorrow and poverty.” For the art of
Andrea Mantegna, Kristeller puts forth the novel
claim, which will probably not be conceded
by some other critics, of having bten the most
perfect embodiment of the Northern Renaissance.
He points out that there were two distinct art
movements in Italy during the lifetime of
Mantegna—the Florentine and that of Padua and
Venice. In Florence what he styles Italian
humanism attained, he asserts, its most brilliant
growth. To Venice, the connecting link between
Italy and the East, he assigns the second, and to
Padua, the scene of Mantegna’s best efforts,
the third place in the great movement, the
effects of which were felt in every branch of
human endeavour, from the loftiest flights of
genius to the humblest efforts of the art crafts-
man, striving to express the ideal in visible form.
The influence over Mantegna of such writers as
Guarino of Verona and Cyriacus of Ancona, and
of his contemporaries, Bono da Ferrara and
Ansuino da Forli, both of whom worked with him
in the Eremitani Chapel, with that of his foster-
father Squarcione, Giovanni Bellini, and, above all,
of Donatello, is assessed in every case at its true
value, whilst the gradual evolution of the individual
style of the subject of the monograph is traced
with an unerring hand. The various illustrations,