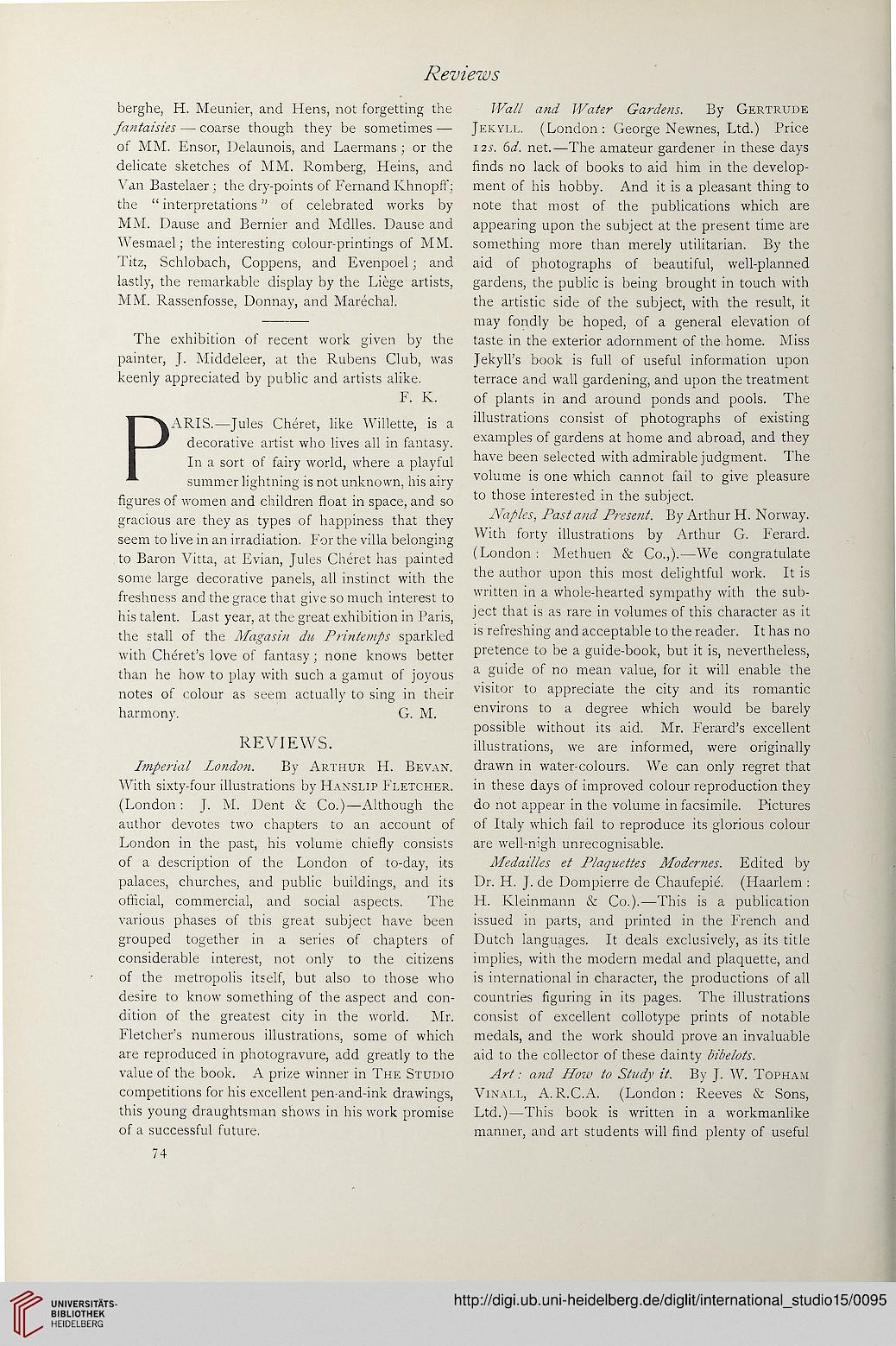 berghe, H. Meunier, and Hens, not forgetting the
fantaisies — coarse though they be sometimes —
of MM. Ensor, Delaunois, and Laermans ; or the
delicate sketches of MM. Romberg, Heins, and
Van Bastelaer ; the dry-points of Fernand Khnopff;
the “ interpretations ” of celebrated works by
MM. Dause and Bernier and Mdlles. Dause and
Wesmael; the interesting colour-printings of MM.
Titz, Schlobach, Coppens, and Evenpoel; and
lastly, the remarkable display by the Liege artists,
MM. Rassenfosse, Donnay, and Marechal.

The exhibition of recent work given by the
painter, J. Middeleer, at the Rubens Club, was
keenly appreciated by public and artists alike.

PARIS.—Jules Cheret, like Willette, is a
decorative artist who lives all in fantasy.
In a sort of fairy world, where a playful
summer lightning is not unknown, his airy
figures of women and children float in space, and so
gracious are they as types of happiness that they
seem to live in an irradiation. For the villa belonging
to Baron Vitta, at Evian, Jules Cheret has painted
some large decorative panels, all instinct with the
freshness and the grace that give so much interest to
his talent. Last year, at the great exhibition in Paris,
the stall of the Magasin dn Printemps sparkled
with Cheret’s love of fantasy; none knows better
than he how to play with such a gamut of joyous
notes of colour as seem actually to sing in their
harmony. G. M.

author devotes two chapters to an account of
London in the past, his volume chiefly consists
of a description of the London of to-day, its
palaces, churches, and public buildings, and its
official, commercial, and social aspects. The
various phases of this great subject have been
grouped together in a series of chapters of
considerable interest, not only to the citizens
of the metropolis itself, but also to those who
desire to know something of the aspect and con-
dition of the greatest city in the world. Mr.
Fletcher’s numerous illustrations, some of which
are reproduced in photogravure, add greatly to the
value of the book. A prize winner in The Studio
competitions for his excellent pen-and-ink drawings,
this young draughtsman shows in his work promise
of a successful future.

Wall and Water Gardens. By Gertrude
Jekyll. (London : George Newnes, Ltd.) Price
12s. 6d. net.—The amateur gardener in these days
finds no lack of books to aid him in the develop-
ment of his hobby. And it is a pleasant thing to
note that most of the publications which are
appearing upon the subject at the present time are
something more than merely utilitarian. By the
aid of photographs of beautiful, well-planned
gardens, the public is being brought in touch with
the artistic side of the subject, with the result, it
may fondly be hoped, of a general elevation of
taste in the exterior adornment of the home. Miss
Jekyll’s book is full of useful information upon
terrace and wall gardening, and upon the treatment
of plants in and around ponds and pools. The
illustrations consist of photographs of existing
examples of gardens at home and abroad, and they
have been selected with admirable judgment. The
volume is one which cannot fail to give pleasure
to those interested in the subject.

Naples, Past and Present. By Arthur H. Norway.
With forty illustrations by Arthur G. Ferard.
(London : Methuen & Co.,).—We congratulate
the author upon this most delightful work. It is
written in a whole-hearted sympathy with the sub-
ject that is as rare in volumes of this character as it
is refreshing and acceptable to the reader. It has no
pretence to be a guide-book, but it is, nevertheless,
a guide of no mean value, for it will enable the
visitor to appreciate the city and its romantic
environs to a degree which would be barely
possible without its aid. Mr. Ferard’s excellent
illustrations, we are informed, were originally
drawn in water-colours. We can only regret that
in these days of improved colour reproduction they
do not appear in the volume in facsimile. Pictures
of Italy which fail to reproduce its glorious colour
are well-nigh unrecognisable.

Medailles et Plaquettes Modernes. Edited by
Dr. H. J. de Dompierre de Chaufepie. (Haarlem :
H. Ivleinmann & Co.).—This is a publication
issued in parts, and printed in the French and
Dutch languages. It deals exclusively, as its title
implies, with the modern medal and plaquette, and
is international in character, the productions of all
countries figuring in its pages. The illustrations
consist of excellent collotype prints of notable
medals, and the work should prove an invaluable
aid to the collector of these dainty bibelots.

Art: and How to Study it. By J. W. Topham
Vinall, A.R.C.A. (London: Reeves & Sons,
Ltd.)—This book is written in a workmanlike
manner, and art students will find plenty of useful