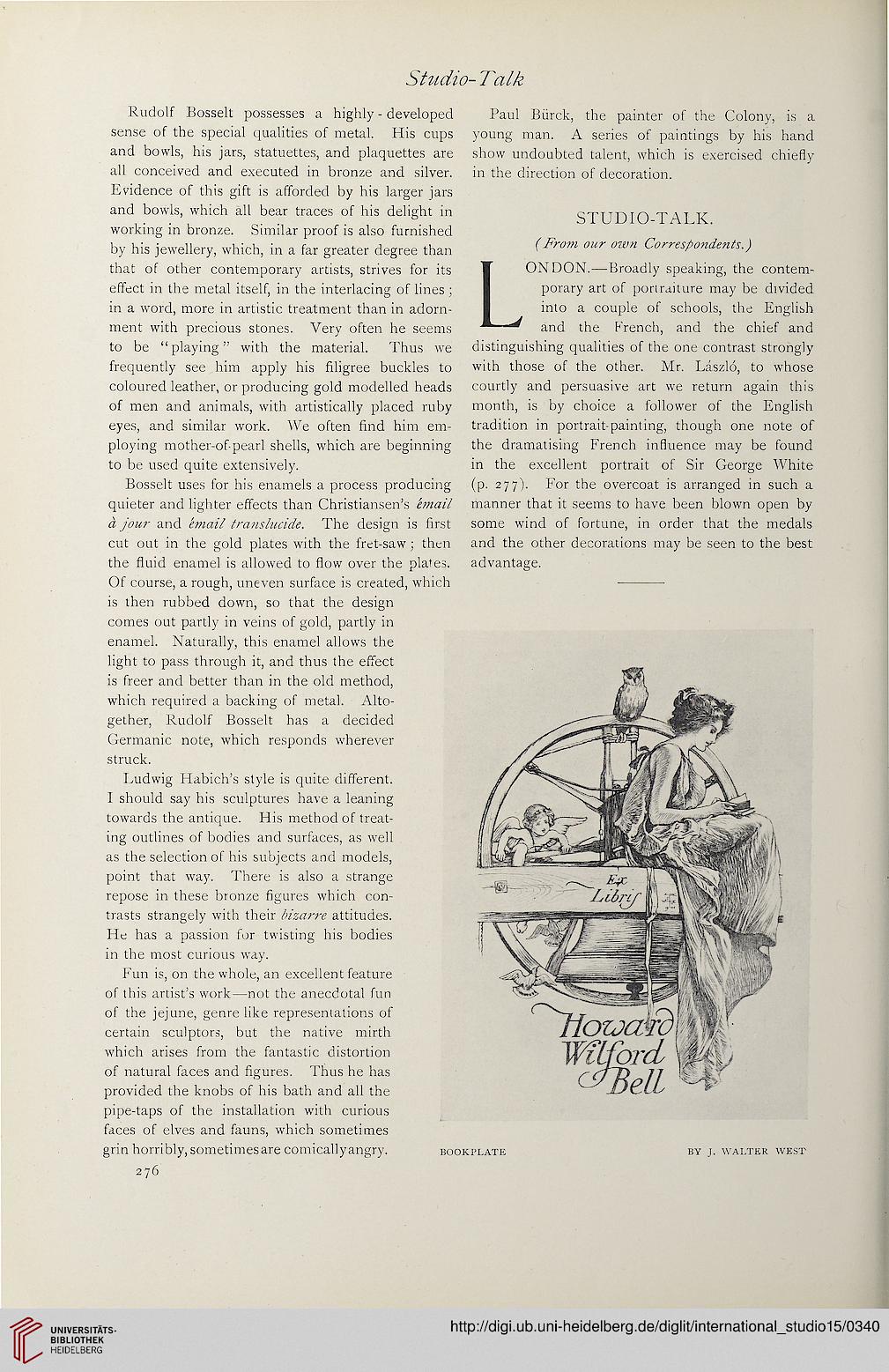 Rudolf Bosselt possesses a highly - developed
sense of the special qualities of metal. His cups
and bowls, his jars, statuettes, and plaquettes are
all conceived and executed in bronze and silver.
Evidence of this gift is afforded by his larger jars
and bowls, which all bear traces of his delight in
working in bronze. Similar proof is also furnished
by his jewellery, which, in a far greater degree than
that of other contemporary artists, strives for its
effect in the metal itself, in the interlacing of lines ;
in a word, more in artistic treatment than in adorn-
ment with precious stones. Very often he seems
to be “playing” with the material. Thus we
frequently see him apply his filigree buckles to
coloured leather, or producing gold modelled heads
of men and animals, with artistically placed ruby
eyes, and similar work. We often find him em-
ploying mother-of-pearl shells, which are beginning
to be used quite extensively.

Bosselt uses for his enamels a process producing
quieter and lighter effects than Christiansen’s email
a jour and email translucide. The design is first
cut out in the gold plates with the fret-saw; then
the fluid enamel is allowed to flow over the plates.
Of course, a rough, uneven surface is created, which
is then rubbed down, so that the design
comes out partly in veins of gold, partly in
enamel. Naturally, this enamel allows the
light to pass through it, and thus the effect
is freer and better than in the old method,
which required a backing of metal. Alto-
gether, Rudolf Bosselt has a decided
Germanic note, which responds wherever
struck.

Ludwig Habich’s style is quite different.

I should say his sculptures have a leaning
towards the antique. His method of treat-
ing outlines of bodies and surfaces, as well
as the selection of his subjects and models,
point that way. There is also a strange
repose in these bronze figures which con-
trasts strangely with their bizarre attitudes.

He has a passion for twisting his bodies
in the most curious way.

Fun is, on the whole, an excellent feature
of this artist’s work—-not the anecdotal fun
of the jejune, genre like representations of
certain sculptors, but the native mirth
which arises from the fantastic distortion
of natural faces and figures. Thus he has
provided the knobs of his bath and all the
pipe-taps of the installation with curious
faces of elves and fauns, which sometimes
grin horribly, sometimes are comicallyangry.

Paul Biirck, the painter of the Colony, is a
young man. A series of paintings by his hand
show undoubted talent, which is exercised chiefly
in the direction of decoration.

LONDON.—Broadly speaking, the contem-
porary art of portraiture may be divided
into a couple of schools, the English
and the French, and the chief and
distinguishing qualities of the one contrast strongly
with those of the other. Mr. Laszlo, to whose
courtly and persuasive art we return again this
month, is by choice a follower of the English
tradition in portrait-painting, though one note of
the dramatising French influence may be found
in the excellent portrait of Sir George White
(p. 277). For the overcoat is arranged in such a
manner that it seems to have been blown open by
some wind of fortune, in order that the medals
and the other decorations may be seen to the best
advantage.