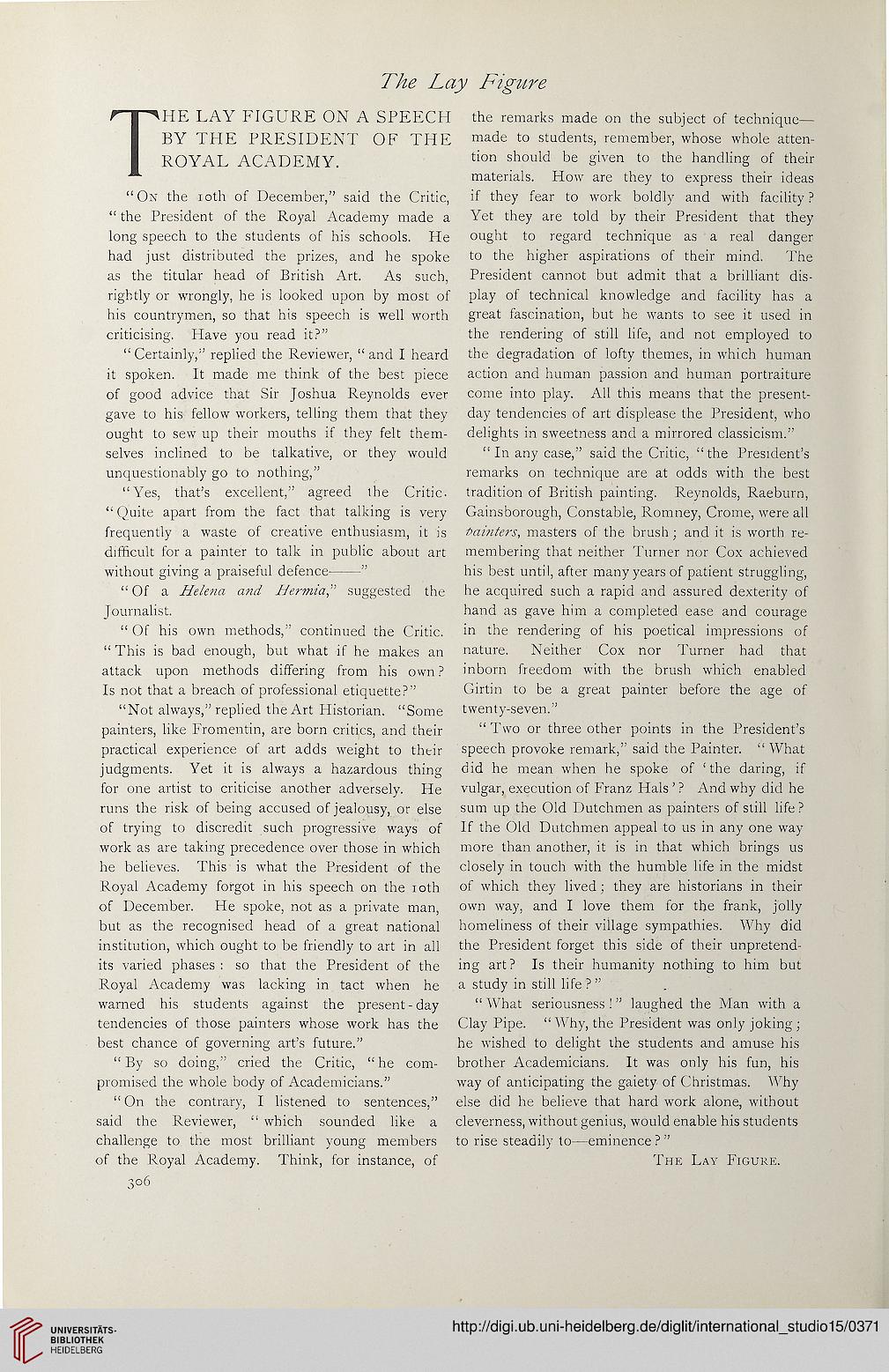 The lay figure on a speech

BY THE PRESIDENT OF THE
ROYAL ACADEMY.

“On the ioth of December,” said the Critic,
“ the President of the Royal Academy made a
long speech to the students of his schools. He
had just distributed the prizes, and he spoke
as the titular head of British Art. As such,
rightly or wrongly, he is looked upon by most of
his countrymen, so that his speech is well worth
criticising. Have you read it?”

“ Certainly,” replied the Reviewer, “ and I heard
it spoken. It made me think of the best piece
of good advice that Sir Joshua Reynolds ever
gave to his fellow workers, telling them that they
ought to sew up their mouths if they felt them-
selves inclined to be talkative, or they would
unquestionably go to nothing,”

“Yes, that’s excellent,” agreed the Critic.
“ Quite apart from the fact that talking is very
frequently a waste of creative enthusiasm, it is
difficult for a painter to talk in public about art

without giving a praiseful defence-”

“ Of a Helena and Hermia,” suggested the
Journalist.

“ Of his own methods,” continued the Critic.

“ This is bad enough, but what if he makes an
attack upon methods differing from his own?
Is not that a breach of professional etiquette?”

“Not always,” replied the Art Historian. “Some
painters, like Fromentin, are born critics, and their
practical experience of art adds weight to their
judgments. Yet it is always a hazardous thing
for one artist to criticise another adversely. He
runs the risk of being accused of jealousy, or else
of trying to discredit such progressive ways of
work as are taking precedence over those in which
he believes. This is what the President of the
Royal Academy forgot in his speech on the ioth
of December. He spoke, not as a private man,
but as the recognised head of a great national
institution, which ought to be friendly to art in all
its varied phases : so that the President of the
Royal Academy was lacking in tact when he
warned his students against the present-day
tendencies of those painters whose work has the
best chance of governing art’s future.”

“ By so doing,” cried the Critic, “ he com-
promised the whole body of Academicians.”

“ On the contrary, I listened to sentences,”
said the Reviewer, “ which sounded like a
challenge to the most brilliant young members
of the Royal Academy. Think, for instance, of
3°6

the remarks made on the subject of technique—
made to students, remember, whose whole atten-
tion should be given to the handling of their
materials. How are they to express their ideas
if they fear to work boldly and with facility ?
Yet they are told by their President that they
ought to regard technique as a real danger
to the higher aspirations of their mind. The
President cannot but admit that a brilliant dis-
play of technical knowledge and facility has a
great fascination, but he wants to see it used in
the rendering of still life, and not employed to
the degradation of lofty themes, in which human
action and human passion and human portraiture
come into play. All this means that the present-
day tendencies of art displease the President, who
delights in sweetness and a mirrored classicism.”

“ In any case,” said the Critic, “the President’s
remarks on technique are at odds with the best
tradition of British painting. Reynolds, Raeburn,
Gainsborough, Constable, Romney, Crome, were all
t>ai?ite?'s, masters of the brush; and it is worth re-
membering that neither Turner nor Cox achieved
his best until, after many years of patient struggling,
he acquired such a rapid and assured dexterity of
hand as gave him a completed ease and courage
in the rendering of his poetical impressions of
nature. Neither Cox nor Turner had that
inborn freedom with the brush which enabled
Girtin to be a great painter before the age of
twenty-seven.”

“ Two or three other points in the President’s
speech provoke remark,” said the Painter. “ What
did he mean when he spoke of ‘the daring, if
vulgar, execution of Franz Hals ’ ? And why did he
sum up the Old Dutchmen as painters of still life ?
If the Old Dutchmen appeal to us in any one way
more than another, it is in that which brings us
closely in touch with the humble life in the midst
of which they lived; they are historians in their
own way, and I love them for the frank, jolly
homeliness of their village sympathies. Why did
the President forget this side of their unpretend-
ing art? Is their humanity nothing to him but
a study in still life ? ”

“ What seriousness ! ” laughed the Man with a
Clay Pipe. “ Why, the President was only joking ;
he wished to delight the students and amuse his
brother Academicians. It was only his fun, his
way of anticipating the gaiety of Christmas. Why
else did he believe that hard work alone, without
cleverness, without genius, would enable his students
to rise steadily to—eminence ? ”