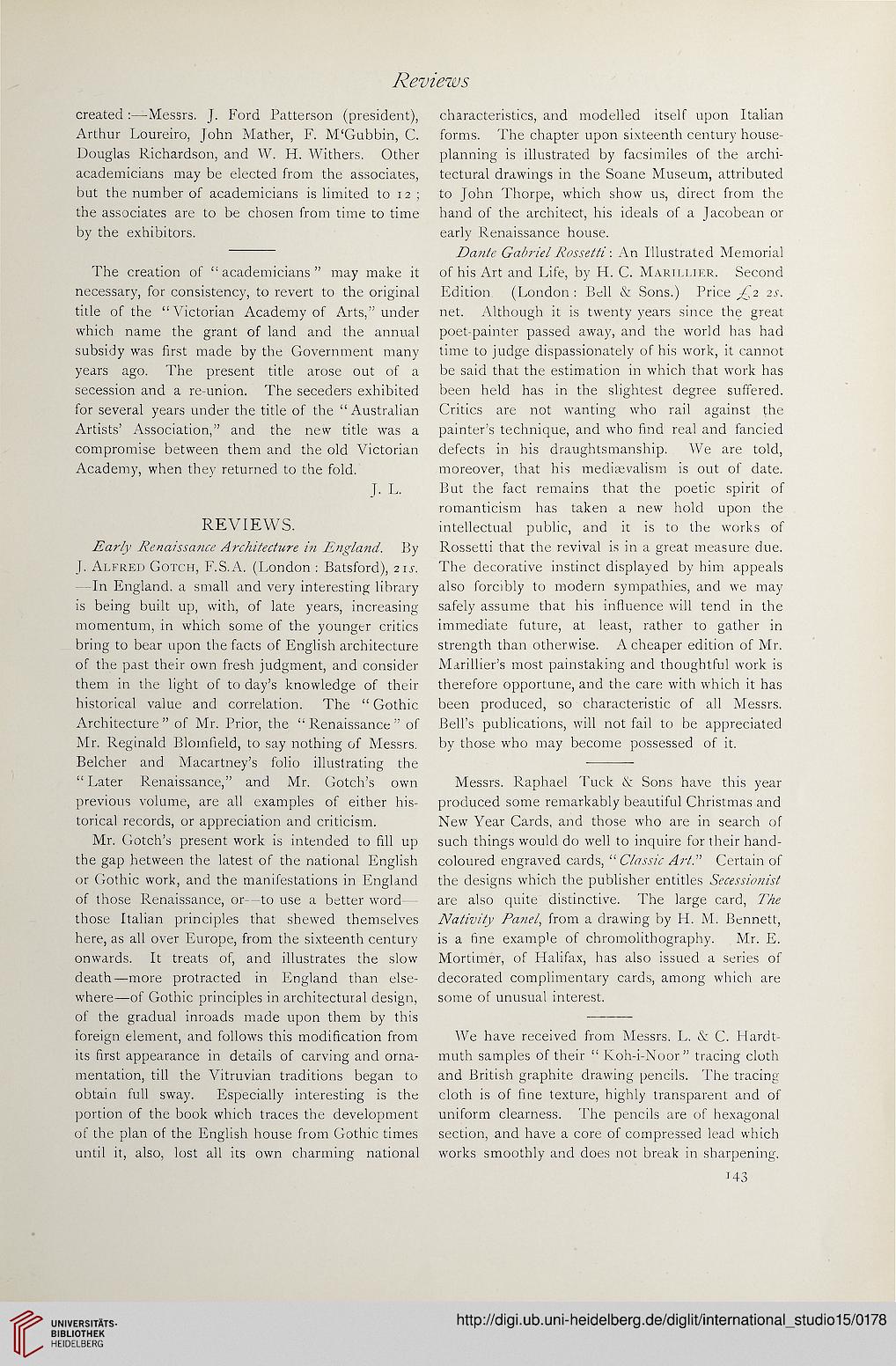 created :—Messrs. J. Ford Patterson (president),
Arthur Loureiro, John Mather, F. M‘Gubbin, C.
Douglas Richardson, and W. H. Withers. Other
academicians may be elected from the associates,
but the number of academicians is limited to 12 ;
the associates are to be chosen from time to time
by the exhibitors.

The creation of “academicians” may make it
necessary, for consistency, to revert to the original
title of the “Victorian Academy of Arts,” under
which name the grant of land and the annual
subsidy was first made by the Government many
years ago. The present title arose out of a
secession and a re-union. The seceders exhibited
for several years under the title of the “Australian
Artists’ Association,” and the new title was a
compromise between them and the old Victorian
Academy, when they returned to the fold.

Early Renaissance Architecture in England. By
J. Alfred Gotch, F.S.A. (London : Batsford), 2is.
—In England, a small and very interesting library
is being built up, with, of late years, increasing
momentum, in which some of the younger critics
bring to bear upon the facts of English architecture
of the past their own fresh judgment, and consider
them in the light of to day’s knowledge of their
historical value and correlation. The “Gothic
Architecture ” of Mr. Prior, the “ Renaissance ” of
Mr. Reginald Blomfield, to say nothing of Messrs.
Belcher and Macartney’s folio illustrating the
“ Later Renaissance,” and Mr. Gotch’s own
previous volume, are all examples of either his-
torical records, or appreciation and criticism.

Mr. Gotch’s present work is intended to fill up
the gap hetween the latest of the national English
or Gothic work, and the manifestations in England
of those Renaissance, or--to use a better word
those Italian principles that shewed themselves
here, as all over Europe, from the sixteenth century
onwards. It treats of, and illustrates the slow
death—more protracted in England than else-
where—of Gothic principles in architectural design,
of the gradual inroads made upon them by this
foreign element, and follows this modification from
its first appearance in details of carving and orna-
mentation, till the Vitruvian traditions began to
obtain full sway. Especially interesting is the
portion of the book which traces the development
of the plan of the English house from Gothic times
until it, also, lost all its own charming national

characteristics, and modelled itself upon Italian
forms. The chapter upon sixteenth century house-
planning is illustrated by facsimiles of the archi-
tectural drawings in the Soane Museum, attributed
to John Thorpe, which show us, direct from the
hand of the architect, his ideals of a Jacobean or
early Renaissance house.

Dante Gabriel Rossetti: An Illustrated Memorial
of his Art and Life, by H. C. Marillier. Second
Edition (London : Bell & Sons.) Price £2 2s.
net. Although it is twenty years since the great
poet-painter passed away, and the world has had
time to judge dispassionately of his work, it cannot
be said that the estimation in which that work has
been held has in the slightest degree suffered.
Critics are not wanting who rail against the
painter’s technique, and who find real and fancied
defects in his draughtsmanship. We are told,
moreover, that his mediaevalism is out of date.
But the fact remains that the poetic spirit of
romanticism has taken a new hold upon the
intellectual public, and it is to the works of
Rossetti that the revival is in a great measure due.
The decorative instinct displayed by him appeals
also forcibly to modern sympathies, and we may
safely assume that his influence will tend in the
immediate future, at least, rather to gather in
strength than otherwise. A cheaper edition of Mr.
Marillier’s most painstaking and thoughtful work is
therefore opportune, and the care with which it has
been produced, so characteristic of all Messrs.
Bell’s publications, will not fail to be appreciated
by those who may become possessed of it.

Messrs. Raphael Tuck & Sons have this year
produced some remarkably beautiful Christmas and
New Year Cards, and those who are in search of
such things would do well to inquire for their hand-
coloured engraved cards, “ Classic Art.” Certain of
the designs which the publisher entitles Secessionist
are also quite distinctive. The large card, The
Nativity Panel, from a drawing by H. M. Bennett,
is a fine examp’e of chromolithography. Mr. E.
Mortimer, of Halifax, has also issued a series of
decorated complimentary cards, among which are
some of unusual interest.

We have received from Messrs. L. & C. Hardt-
muth samples of their “ Koh-i-Noor” tracing cloth
and British graphite drawing pencils. The tracing
cloth is of fine texture, highly transparent and of
uniform clearness. The pencils are of hexagonal
section, and have a core of compressed lead which
works smoothly and does not break in sharpening.