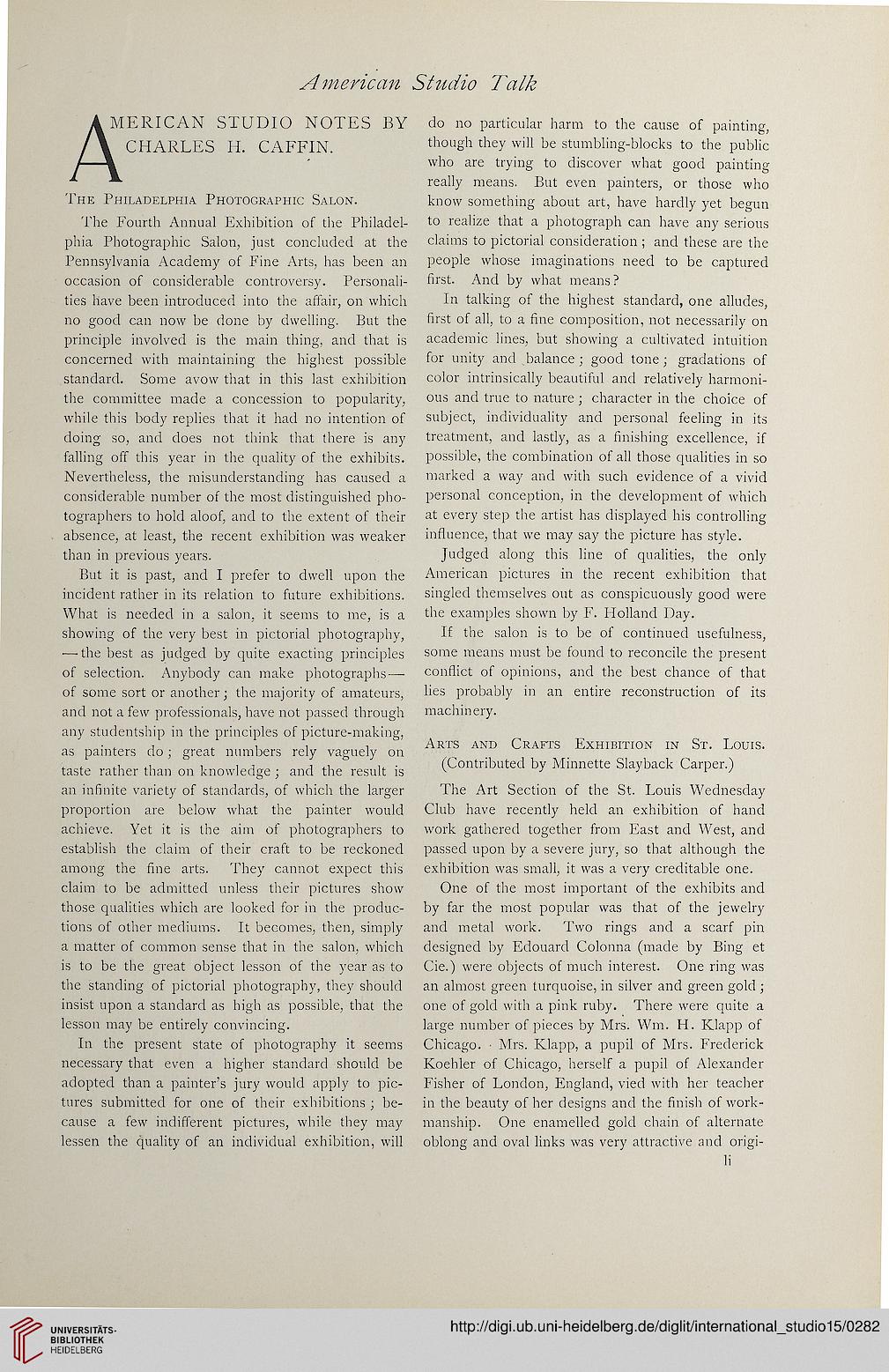 The Fourth Annual Exhibition of the Philadel-
phia Photographic Salon, just concluded at the
Pennsylvania Academy of Fine Arts, has been an
occasion of considerable controversy. Personali-
ties have been introduced into the affair, on which
no good can now be done by dwelling. But the
principle involved is the main thing, and that is
concerned with maintaining the highest possible
standard. Some avow that in this last exhibition
the committee made a concession to popularity,
while this body replies that it had no intention of
doing so, and does not think that there is any
falling off this year in the quality of the exhibits.
Nevertheless, the misunderstanding has caused a
considerable number of the most distinguished pho-
tographers to hold aloof, and to the extent of their
absence, at least, the recent exhibition was weaker
than in previous years.

But it is past, and I prefer to dwell upon the
incident rather in its relation to future exhibitions.
What is needed in a salon, it seems to me, is a
showing of the very best in pictorial photography,
— the best as judged by quite exacting principles
of selection. Anybody can make photographs —
of some sort or another; the majority of amateurs,
and not a few professionals, have not passed through
any studentship in the principles of picture-making,
as painters do; great numbers rely vaguely on
taste rather than on knowledge; and the result is
an infinite variety of standards, of which the larger
proportion are below what the painter would
achieve. Yet it is the aim of photographers to
establish the claim of their craft to be reckoned
among the fine arts. They cannot expect this
claim to be admitted unless their pictures show
those qualities which are looked for in the produc-
tions of other mediums. It becomes, then, simply
a matter of common sense that in the salon, which
is to be the great object lesson of the year as to
the standing of pictorial photography, they should
insist upon a standard as high as possible, that the
lesson may be entirely convincing.

In the present state of photography it seems
necessary that even a higher standard should be
adopted than a painter’s jury would apply to pic-
tures submitted for one of their exhibitions ; be-
cause a few indifferent pictures, while they may
lessen the quality of an individual exhibition, will

do no particular harm to the cause of painting,
though they will be stumbling-blocks to the public
who are trying to discover what good painting
really means. But even painters, or those who
know something about art, have hardly yet begun
to realize that a photograph can have any serious
claims to pictorial consideration ; and these are the
people whose imaginations need to be captured
first. And by what means?

In talking of the highest standard, one alludes,
first of all, to a fine composition, not necessarily on
academic lines, but showing a cultivated intuition
for unity and balance ; good tone; gradations of
color intrinsically beautiful and relatively harmoni-
ous and true to nature ; character in the choice of
subject, individuality and personal feeling in its
treatment, and lastly, as a finishing excellence, if
possible, the combination of all those qualities in so
marked a way and with such evidence of a vivid
personal conception, in the development of which
at every step the artist has displayed his controlling
influence, that we may say the picture has style.

Judged along this line of qualities, the only
American pictures in the recent exhibition that
singled themselves out as conspicuously good were
the examples shown by F. Holland Day.

If the salon is to be of continued usefulness,
some means must be found to reconcile the present
conflict of opinions, and the best chance of that
lies probably in an entire reconstruction of its
machinery.

The Art Section of the St. Louis Wednesday
Club have recently held an exhibition of hand
work gathered together from East and West, and
passed upon by a severe jury, so that although the
exhibition was small, it was a very creditable one.

One of the most important of the exhibits and
by far the most popular was that of the jewelry
and metal work. Two rings and a scarf pin
designed by Edouard Colonna (made by Bing et
Cie.) were objects of much interest. One ring was
an almost green turquoise, in silver and green gold ;
one of gold with a pink ruby. There were quite a
large number of pieces by Mrs. Wm. H. Klapp of
Chicago. Mrs. Klapp, a pupil of Mrs. Frederick
Koehler of Chicago, herself a pupil of Alexander
Fisher of London, England, vied with her teacher
in the beauty of her designs and the finish of work-
manship. One enamelled gold chain of alternate
oblong and oval links was very attractive and origi-