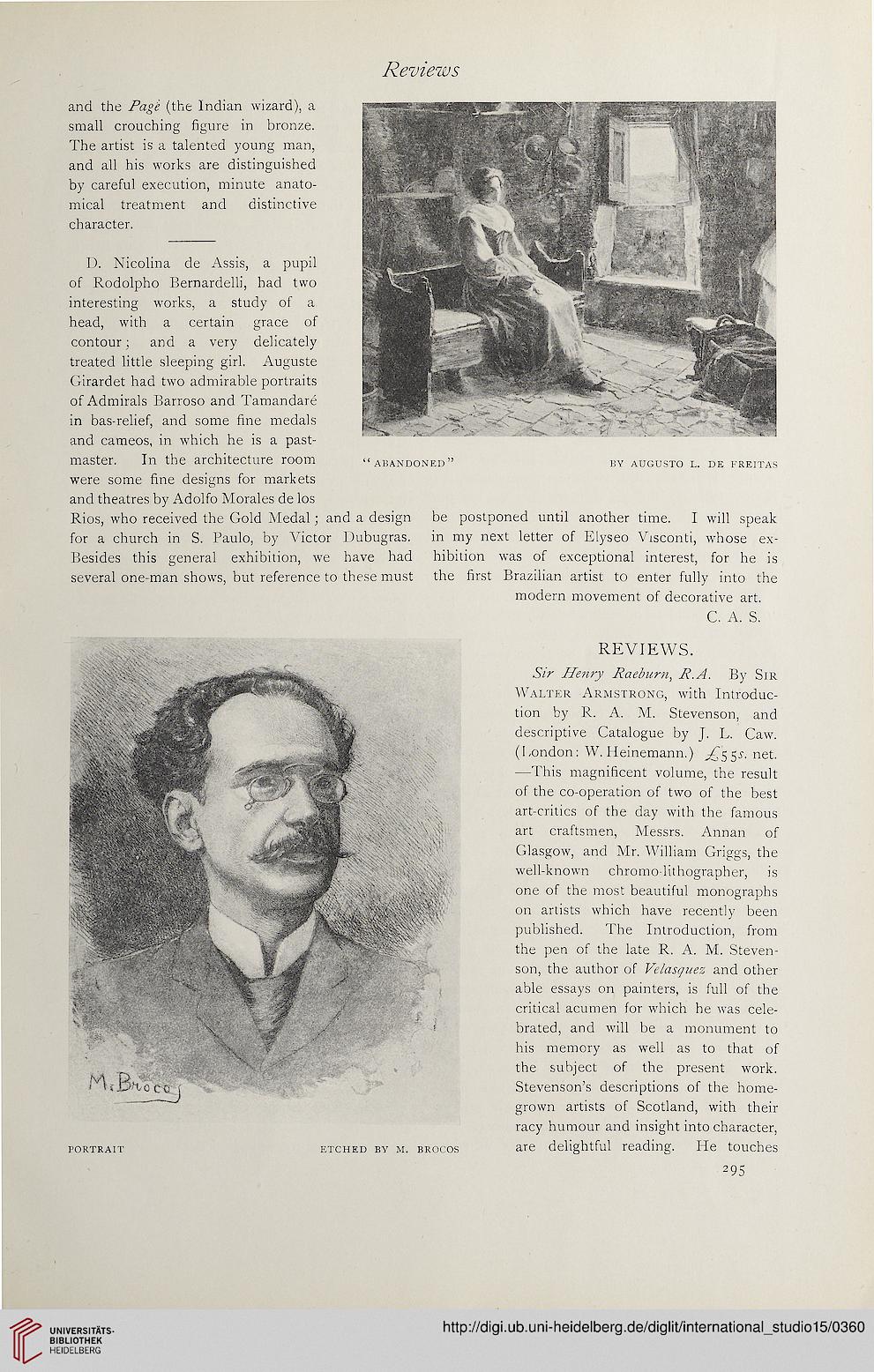 and the Page (the Indian wizard), a
small crouching figure in bronze.
The artist is a talented young man,
and all his works are distinguished
by careful execution, minute anato-
mical treatment and distinctive
character.

D. Nicolina de Assis, a pupil
of Rodolpho Bernardelli, had two
interesting works, a study of a
head, with a certain grace of
contour; and a very delicately
treated little sleeping girl. Auguste
Girardet had two admirable portraits
of Admirals Barroso and Tamandare
in bas-relief, and some fine medals
and cameos, in which he is a past-
master. In the architecture room
were some fine designs for markets
and theatres by Adolfo Morales de los
Rios, who received the Gold Medal; and a design
for a church in S. Paulo, by Victor Dubugras.
Besides this general exhibition, we have had
several one-man shows, but reference to these must

be postponed until another time. I will speak
in my next letter of Elyseo Visconti, whose ex-
hibition was of exceptional interest, for he is
the first Brazilian artist to enter fully into the
modern movement of decorative art.

Sir Henry Raeburn, R.A. By Sir
Walter Armstrong, with Introduc-
tion by R. A. M. Stevenson, and
descriptive Catalogue by J. L. Caw.
(London: W. Heinemann.) ^"5 5.5-. net.
—This magnificent volume, the result
of the co-operation of two of the best
art-critics of the day with the famous
art craftsmen, Messrs. Annan of
Glasgow, and Mr. William Griggs, the
well-known chromo-lithographer, is
one of the most beautiful monographs
on artists which have recently been
published. The Introduction, from
the pen of the late R. A. M. Steven-
son, the author of Velasquez and other
able essays on painters, is full of the
critical acumen for which he was cele-
brated, and will be a monument to
his memory as well as to that of
the subject of the present work.
Stevenson’s descriptions of the home-
grown artists of Scotland, with their
racy humour and insight into character,
are delightful reading. He touches