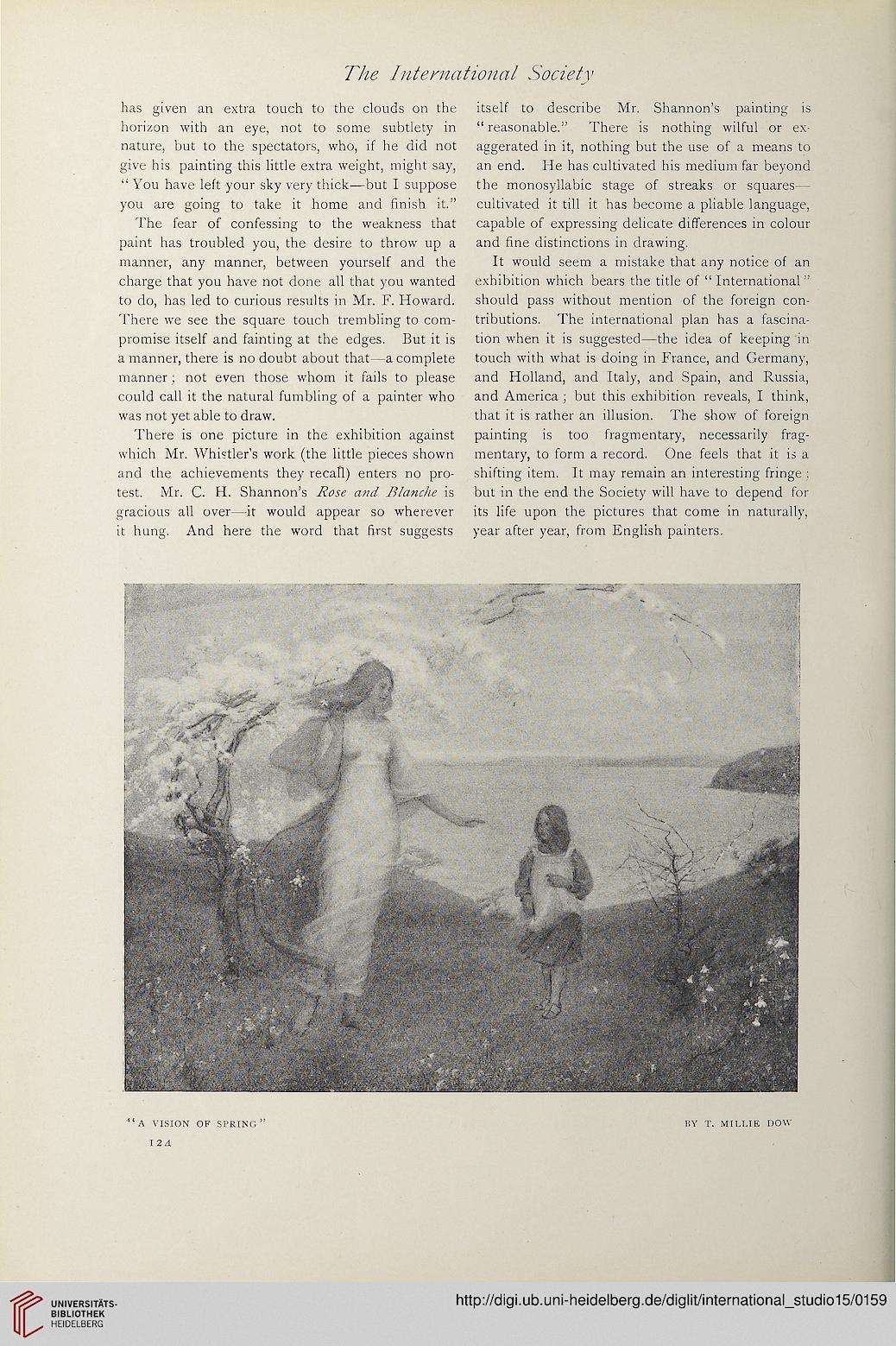 has given an extra touch to the clouds on the
horizon with an eye, not to some subtlety in
nature, but to the spectators, who, if he did not
give his painting this little extra weight, might say,
“ You have left your sky very thick—but I suppose
you are going to take it home and finish it.”

The fear of confessing to the weakness that
paint has troubled you, the desire to throw up a
manner, any manner, between yourself and the
charge that you have not done all that you wanted
to do, has led to curious results in Mr. F. Howard.
There we see the square touch trembling to com-
promise itself and fainting at the edges. But it is
a manner, there is no doubt about that—a complete
manner; not even those whom it fails to please
could call it the natural fumbling of a painter who
was not yet able to draw.

There is one picture in the exhibition against
which Mr. Whistler’s work (the little pieces shown
and the achievements they recall) enters no pro-
test. Mr. C. H. Shannon’s Rose and Blanche is
racious all over—it would appear so wherever
it hung. And here the word that first suggests

itself to describe Mr. Shannon’s painting is
“ reasonable.” There is nothing wilful or ex-
aggerated in it, nothing but the use of a means to
an end. He has cultivated his medium far beyond
the monosyllabic stage of streaks or squares—
cultivated it till it has become a pliable language,
capable of expressing delicate differences in colour
and fine distinctions in drawing.

It would seem a mistake that any notice of an
exhibition which bears the title of “ International ”
should pass without mention of the foreign con-
tributions. The international plan has a fascina-
tion when it is suggested—the idea of keeping in
touch with what is doing in France, and Germany,
and Holland, and Italy, and Spain, and Russia,
and America ; but this exhibition reveals, I think,
that it is rather an illusion. The show of foreign
painting is too fragmentary, necessarily frag-
mentary, to form a record. One feels that it is a
shifting item. It may remain an interesting fringe :
but in the end the Society will have to depend for
its life upon the pictures that come in naturally,
year after year, from English painters.

'“A VISION OF SPRING”