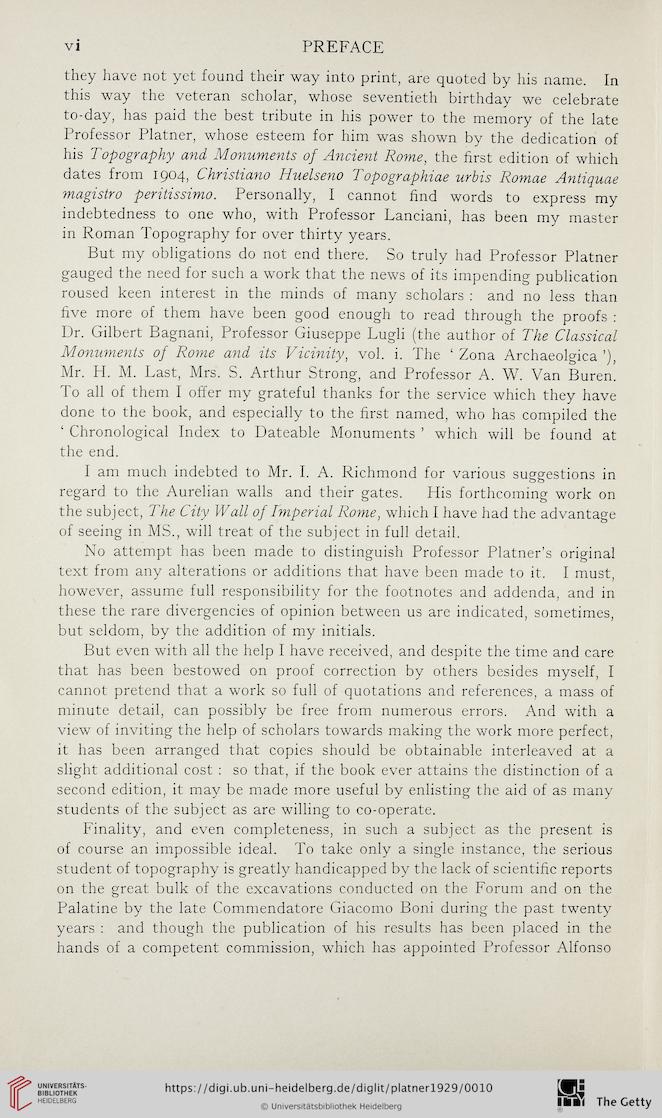 they have not yet found their way into print, are quoted by his name. In
this way the veteran scholar, whose seventieth birthday we celebrate
to-day, has paid the best tribute in his power to the memory of the late
Professor Platner, whose esteem for him was shown by the dedication of
his Topography and Monuments of Ancient Rome, the first edition of which
dates from 1904, Christiano Huelseno Topographiae urbis Romae Antiquae
magistro peritissimo. Personally, I cannot find words to express my
indebtedness to one who, with Professor Lanciani, has been my master
in Roman Topography for over thirty years.
But my obligations do not end there. So truly had Professor Platner
gauged the need for such a work that the news of its impending publication
roused keen interest in the minds of many scholars : and no less than
five more of them have been good enough to read through the proofs :
Dr. Gilbert Bagnani, Professor Giuseppe Lugli (the author of The Classical
Monuments of Rome and its Vicinity, vol. i. The ‘ Zona Archaeolgica
Mr. Η. M. Last, Mrs. S. Arthur Strong, and Professor A. W. Van Buren.
To all of them I offer my grateful thanks for the service which they have
done to the book, and especially to the first named, who has compiled the
‘ Chronological Index to Dateable Monuments ’ which will be found at
the end.
I am much indebted to Mr. I. A. Richmond for various suggestions in
regard to the Aurelian walls and their gates. His forthcoming work on
the subject, The City Wall of Imperial Rome, which I have had the advantage
of seeing in MS., will treat of the subject in full detail.
No attempt has been made to distinguish Professor Platner’s original
text from any alterations or additions that have been made to it. I must,
however, assume full responsibility for the footnotes and addenda, and in
these the rare divergencies of opinion between us are indicated, sometimes,
but seldom, by the addition of my initials.
But even with all the help I have received, and despite the time and care
that has been bestowed on proof correction by others besides myself, I
cannot pretend that a work so full of quotations and references, a mass of
minute detail, can possibly be free from numerous errors. And with a
view of inviting the help of scholars towards making the work more perfect,
it has been arranged that copies should be obtainable interleaved at a
slight additional cost : so that, if the book ever attains the distinction of a
second edition, it may be made more useful by enlisting the aid of as many
students of the subject as are willing to co-operate.
Finality, and even completeness, in such a subject as the present is
of course an impossible ideal. To take only a single instance, the serious
student of topography is greatly handicapped by the lack of scientific reports
on the great bulk of the excavations conducted on the Forum and on the
Palatine by the late Commendatore Giacomo Boni during the past twenty
years : and though the publication of his results has been placed in the
hands of a competent commission, which has appointed Professor Alfonso