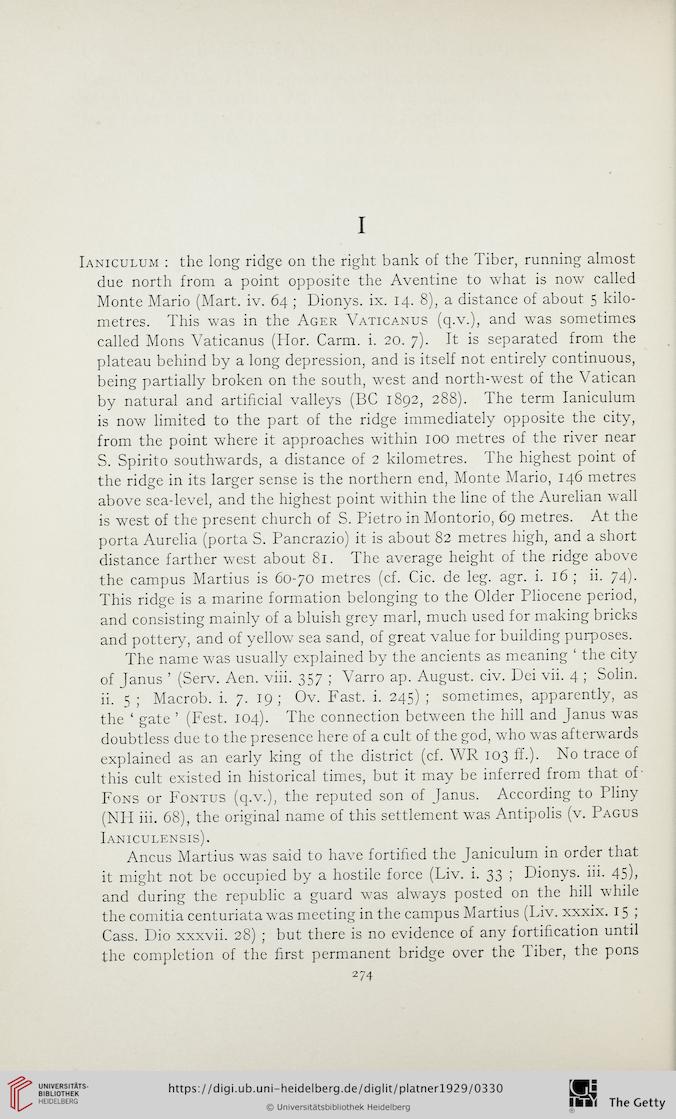 Ianiculum : the long ridge on the right bank of the Tiber, running almost
due north from a point opposite the Aventine to what is now called
Monte Mario (Mart. iv. 64 ■ Dionys. ix. 14. 8), a distance of about 5 kilo-
metres. This was in the Ager Vaticanus (q.v.), and was sometimes
called Mons Vaticanus (Hor. Carm. i. 20. 7). It is separated from the
plateau behind by a long depression, and is itself not entirely continuous,
being partially broken on the south, west and north-west of the Vatican
by natural and artificial valleys (BC 1892, 288). The term Ianiculum
is now limited to the part of the ridge immediately opposite the city,
from the point where it approaches within 100 metres of the river near
S. Spirito southwards, a distance of 2 kilometres. The highest point of
the ridge in its larger sense is the northern end, Monte Mario, 146 metres
above sea-level, and the highest point within the line of the Aurelian wall
is west of the present church of S. Pietro in Montorio, 69 metres. At the
porta Aurelia (porta S. Pancrazio) it is about 82 metres high, and a short
distance farther west about 81. The average height of the ridge above
the campus Martius is 60-70 metres (cf. Cic. de leg. agr. i. 16 ; ii. 74).
This ridge is a marine formation belonging to the Older Pliocene period,
and consisting mainly of a bluish grey marl, much used for making bricks
and pottery, and of yellow sea sand, of great value for building purposes.
The name was usually explained by the ancients as meaning ‘ the city
of Janus ’ (Serv. Aen. viii. 357 ; Varro ap. August, civ. Dei vii. 4 ; Solin.
ii. 5 ; Macrob. i. 7. 19 ; Ov. Fast. i. 245) ; sometimes, apparently, as
the ‘ gate ’ (Fest. 104). The connection between the hill and Janus was
doubtless due to the presence here of a cult of the god, who was afterwards
explained as an early king of the district (cf. WR 103 ff.). No trace of
this cult existed in historical times, but it may be inferred from that of·
Fons or Fontus (q.v.), the reputed son of Janus. According to Pliny
(NH iii. 68), the original name of this settlement was Antipolis (v. Pagus
Ianiculensis).
Ancus Martius was said to have fortified the Janiculum in order that
it might not be occupied by a hostile force (Liv. i. 33 ; Dionys. iii. 45),
and during the republic a guard was always posted on the hill while
the comitia centuriata was meeting in the campus Martius (Div. xxxix. 15 ;
Cass. Dio xxxvii. 28) ; but there is no evidence of any fortification until
the completion of the first permanent bridge over the Tiber, the pons
274