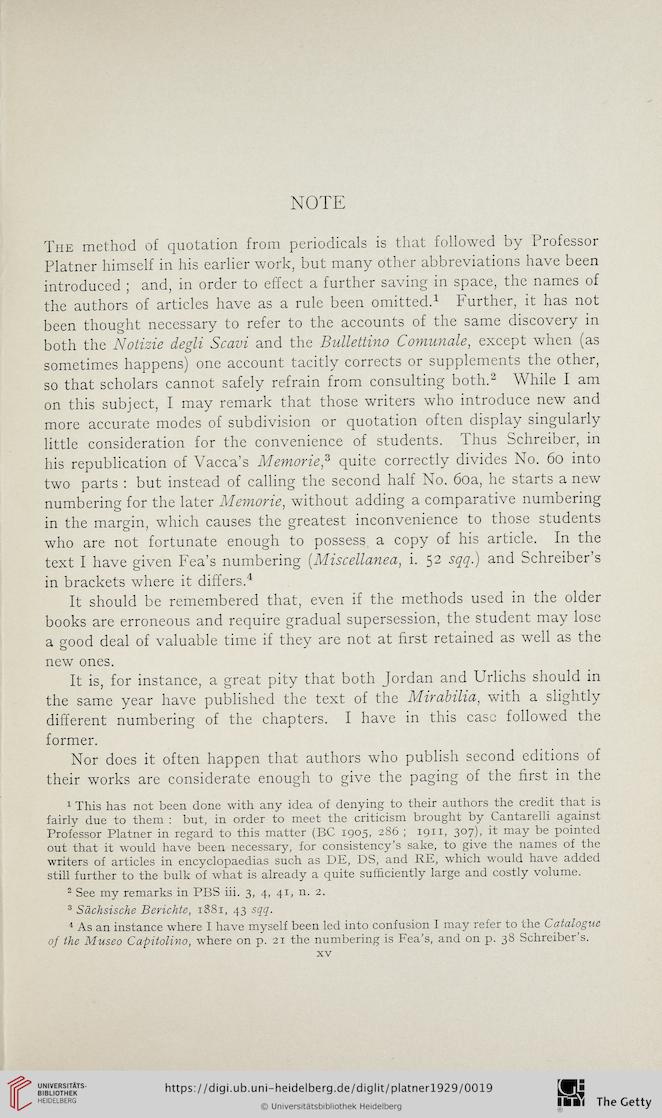 The method of quotation from periodicals is that followed by Professor
Platner himself in his earlier work, but many other abbreviations have been
introduced ; and, in order to effect a further saving in space, the names of
the authors of articles have as a rule been omitted.1 Further, it has not
been thought necessary to refer to the accounts of the same discovery in
both the Notizie degli Scavi and the Bullettino Comunale, except when (as
sometimes happens) one account tacitly corrects or supplements the other,
so that scholars cannot safely refrain from consulting both.2 While I am
on this subject, I may remark that those writers who introduce new and
more accurate modes of subdivision or quotation often display singularly
little consideration for the convenience of students. Thus Schreiber, in
his republication of Vacca’s Memorie,3 quite correctly divides No. 60 into
two parts : but instead of calling the second half No. 6oa, he starts a new
numbering for the later Memorie, without adding a comparative numbering
in the margin, which causes the greatest inconvenience to those students
who are not fortunate enough to possess a copy of his article. In the
text I have given Fea’s numbering {Miscellanea, i. 52 sqq.) and Schreiber’s
in brackets where it differs.4
It should be remembered that, even if the methods used in the older
books are erroneous and require gradual supersession, the student may lose
a good deal of valuable time if they are not at first retained as well as the
new ones.
It is, for instance, a great pity that both Jordan and Urlichs should in
the same year have published the text of the Mirabilia, with a slightly
different numbering of the chapters. I have in this case followed the
former.
Nor does it often happen that authors who publish second editions of
their works are considerate enough to give the paging of the first in the
1 This has not been done with any idea of denying to their authors the credit that is
fairly due to them : but, in order to meet the criticism brought by Cantarelli against
Professor Platner in regard to this matter (BC 1905, 286 ; 1911, 307), it may be pointed
out that it would have been necessary, for consistency’s sake, to give the names of the
writers of articles in encyclopaedias such as DE, DS, and RE, which would have added
still further to the bulk of what is already a quite sufficiently large and costly volume.
2 See my remarks in PBS iii. 3, 4, 41, n. 2.
3 Sachsische Berichte, 1881, 43 sqq.
4 As an instance where I have myself been led into confusion I may refer to the Catalogue
of the Museo Capitolino, where on p. 21 the numbering is Fea’s, and on p. 38 Schreiber’s.
xv