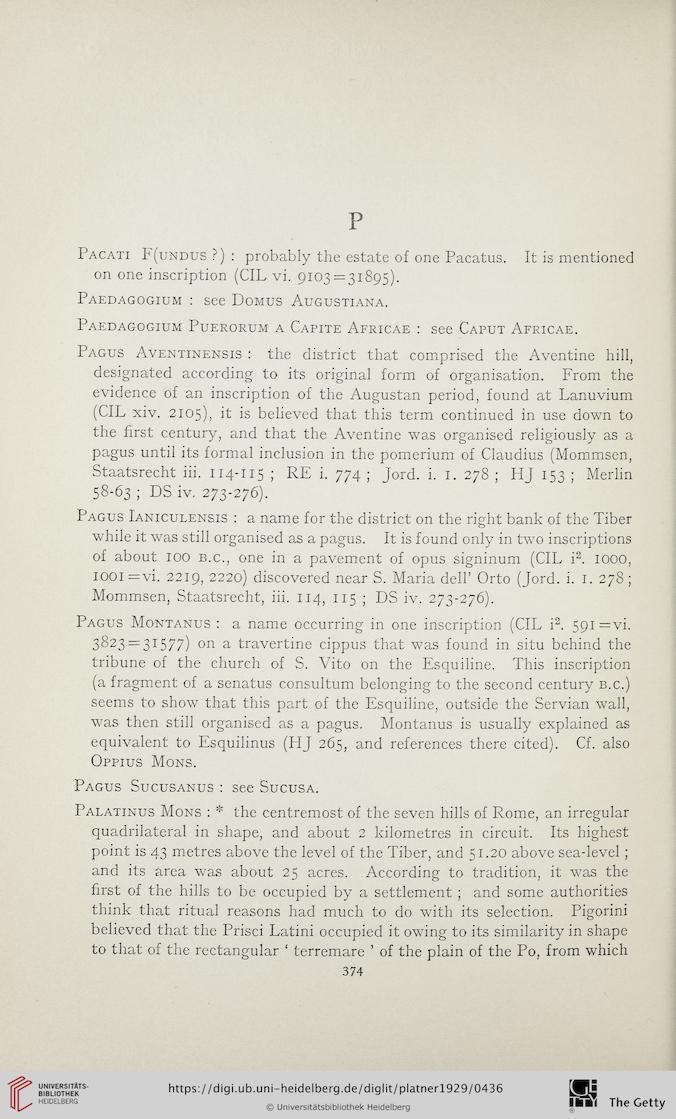 Pacati F(undus ?) : probably the estate of one Pacatus. It is mentioned
on one inscription (CIL vi. 9103 = 31895).
Paedagogium : see Domus Augustiana.
Paedagogium Puerorum a Capite Africae : see Caput Africae.
Pagus Aventinensis : the district that comprised the Aventine hill,
designated according to its original form of organisation. From the
evidence of an inscription of the Augustan period, found at Lanuvium
(CIL xiv. 2105), it is believed that this term continued in use down to
the first century, and that the Aventine was organised religiously as a
pagus until its formal inclusion in the pomerium of Claudius (Mommsen,
Staatsrecht iii. 114-115 ; RE i. 774 ; Jord. i. I. 278 ; HJ 153 ; Merlin
58-63 ; DS iv. 273-276).
Pagus Ianiculensis : a name for the district on the right bank of the Tiber
while it was still organised as a pagus. It is found only in twTo inscriptions
of about IOO b.c., one in a pavement of opus signinum (CIL i2. 1000,
1001 = vi. 2219, 2220) discovered near S. Maria dell’ Orto (Jord. i. 1. 278 ;
Mommsen, Staatsrecht, iii. 114, 115 ; DS iv. 273-276).
Pagus Montanus : a name occurring in one inscription (CIL i2. 591 = vi.
3823 = 31577) on a travertine cippus that was found in situ behind the
tribune of the church of S. Vito on the Esquiline. This inscription
(a fragment of a senatus consultum belonging to the second century b.c.)
seems to show that this part of the Esquiline, outside the Servian wall,
was then still organised as a pagus. Montanus is usually explained as
equivalent to Esquilinus (HJ 265, and references there cited). Cf. also
Oppius Mons.
Pagus Sucusanus: see Sucusa.
Palatinus Mons : * the centremost of the seven hills of Rome, an irregular
quadrilateral in shape, and about 2 kilometres in circuit. Its highest
point is 43 metres above the level of the Tiber, and 51.20 above sea-level ;
and its area was about 25 acres. According to tradition, it was the
first of the hills to be occupied by a settlement ; and some authorities
think that ritual reasons had much to do with its selection. Pigorini
believed that the Prisci Latini occupied it owing to its similarity in shape
to that of the rectangular ‘ terremare ’ of the plain of the Po, from which
374