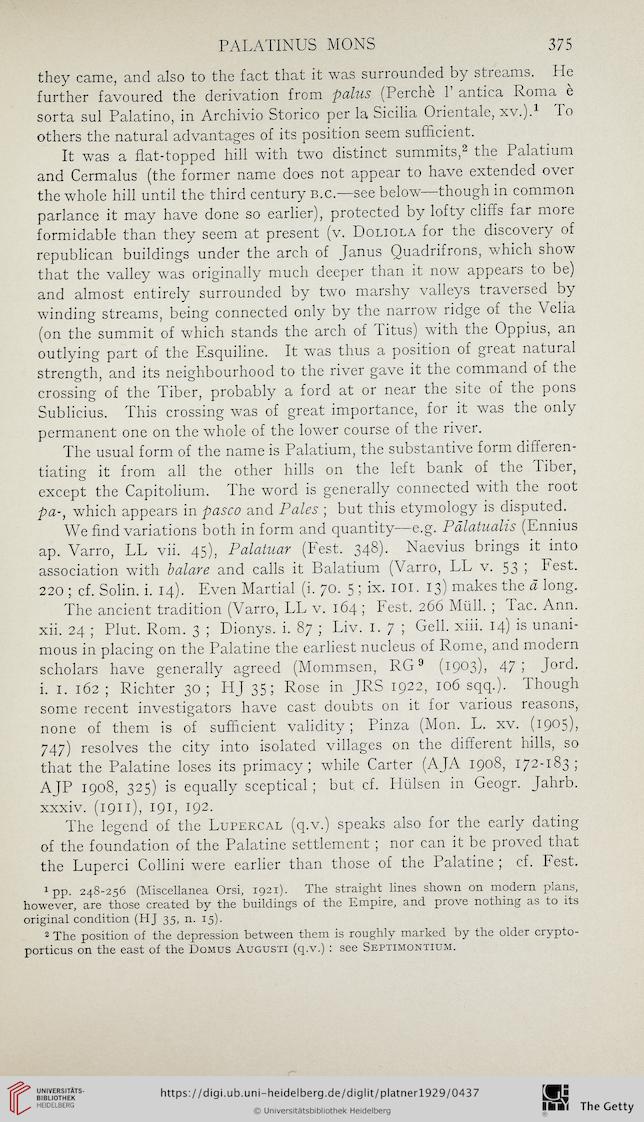 they came, and also to the fact that it was surrounded by streams. He
further favoured the derivation from palus (Perche 1’ antica Roma e
sorta sul Palatino, in Archivio Storico per la Sicilia Orientale, xv.).1 To
others the natural advantages of its position seem sufficient.
It was a flat-topped hill with two distinct summits,2 the Palatium
and Cermalus (the former name does not appear to have extended over
the whole hill until the third century b.c.—see below—though in common
parlance it may have done so earlier), protected by lofty cliffs far more
formidable than they seem at present (v. Doliola for the discovery of
republican buildings under the arch of Janus Quadrifrons, which show
that the valley was originally much deeper than it now appears to be)
and almost entirely surrounded by two marshy valleys traversed by
winding streams, being connected only by the narrow ridge of the Velia
(on the summit of which stands the arch of Titus) with the Oppius, an
outlying part of the Esquiline. It was thus a position of great natural
strength, and its neighbourhood to the river gave it the command of the
crossing of the Tiber, probably a ford at or near the site of the pons
Sublicius. This crossing was of great importance, for it was the only
permanent one on the whole of the lower course of the river.
The usual form of the name is Palatium, the substantive form differen-
tiating it from all the other hills on the left bank of the Tiber,
except the Capitolium. The word is generally connected with the root
pa·, which appears in pasco and Pales ; but this etymology is disputed.
We find variations both in form and quantity—e.g. Palatualis (Ennius
ap. Varro, LL vii. 45), Palatuar (Fest. 348). Naevius brings it into
association with balare and calls it Balatium (Varro, LL v. 53 ; Fest.
220 ; cf. Solin. i. 14). Even Martial (i. 70. 5 ; ix. IOI. 13) makes the a long.
The ancient tradition (Varro, LL v. 164 ; Fest. 266 Mull. ; Tac. Ann.
xii. 24 ; Plut. Rom. 3 ; Dionys. i. 87 ; Liv. I. 7 ; Gell. xiii. 14) is unani-
mous in placing on the Palatine the earliest nucleus of Rome, and modern
scholars have generally agreed (Mommsen, RG9 (1903), 47; Jord,
i. I. 162 ; Richter 30; HJ 35; Rose in JRS 1922, 106 sqq.). Though
some recent investigators have cast doubts on it for various reasons,
none of them is of sufficient validity; Pinza (Mon. L. xv. (1905),
747) resolves the city into isolated villages on the different hills, so
that the Palatine loses its primacy; while Carter (AJA 1908, 172-183;
AJP 1908, 325) is equally sceptical ; but cf. Hulsen in Geogr. Jahrb.
xxxiv. (1911), 191, 192.
The legend of the Lupercal (q.v.) speaks also for the early dating
of the foundation of the Palatine settlement ; nor can it be proved that
the Luperci Collini were earlier than those of the Palatine ; cf. Fest.
1 pp. 248-256 (Miscellanea Orsi, 1921). The straight lines shown on modern plans,
however, are those created by the buildings of the Empire, and prove nothing as to its
original condition (HJ 35, n. 15).
2 The position of the depression between them is roughly marked by the older crypto-
porticus on the east of the Domus Augusti (q.v.) : see Septimontium.