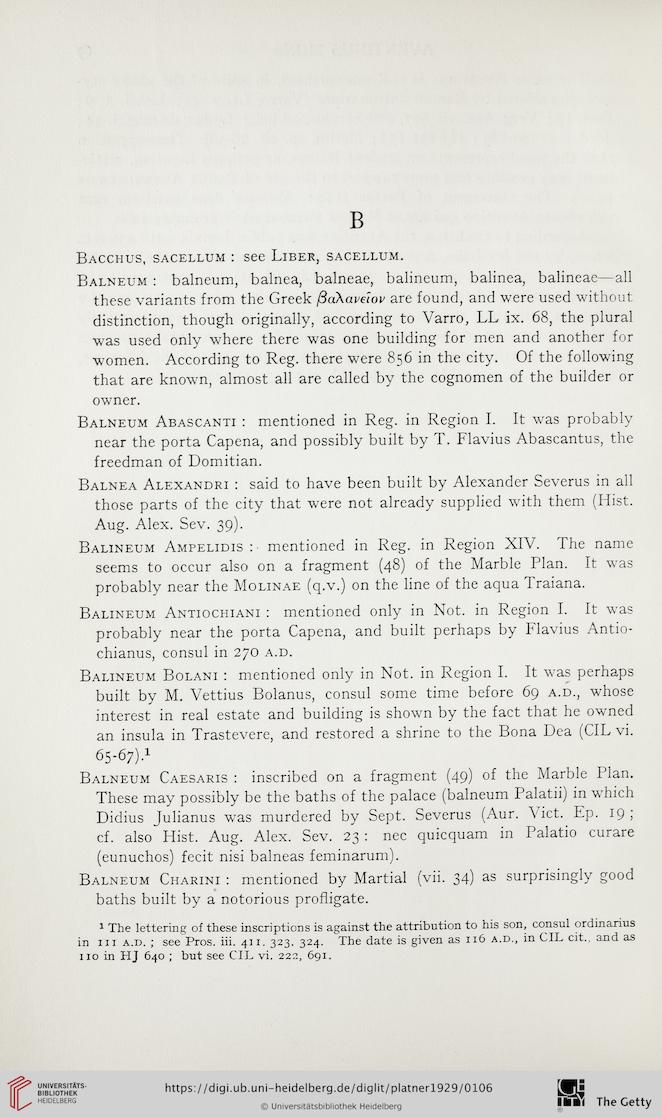 Bacchus, sacellum : see Liber, sacellum.
Balneum : balneum, balnea, balneae, balineum, balinea, balineae—all
these variants from the Greek βαλανείον are found, and were used without
distinction, though originally, according to Varro, LL ix, 68, the plural
was used only where there was one building for men and another for
women. According to Reg. there were 856 in the city. Of the following
that are known, almost all are called by the cognomen of the builder or
owner.
Balneum Abascanti : mentioned in Reg. in Region I. It was probably
near the porta Capena, and possibly built by T. Flavius Abascantus, the
freedman of Domitian.
Balnea Alexandri : said to have been built by Alexander Severus in all
those parts of the city that wTere not already supplied with them (Hist.
Aug. Alex. Sev. 39).
Balineum Ampelidis : mentioned in Reg. in Region XIV. The name
seems to occur also on a fragment (48) of the Marble Plan. It was
probably near the Molinae (q.v.) on the line of the aqua Traiana.
Balineum Antiochiani : mentioned only in Not. in Region I. It was
probably near the porta Capena, and built perhaps by Flavius Antio-
chianus, consul in 270 a.d.
Balineum Bolani : mentioned only in Not. in Region I. It was perhaps
built by M. Vettius Bolanus, consul some time before 69 a.d., whose
interest in real estate and building is shown by the fact that he owned
an insula in Trastevere, and restored a shrine to the Bona Dea (CIL vi.
65-67).1
Balneum Caesaris : inscribed on a fragment (49) of the Marble Plan.
These may possibly be the baths of the palace (balneum Palatii) in which
Didius Julianus was murdered by Sept. Severus (Aur. \/Tict. Ep. 19 ;
cf. also Hist. Aug. Alex. Sev. 23 : nec quicquam in Palatio curare
(eunuchos) fecit nisi balneas feminarum).
Balneum Charini : mentioned by Martial (vii. 34) as surprisingly good
baths built by a notorious profligate.
1 The lettering of these inscriptions is against the attribution to his son, consul ordinarius
in hi a.d. ; see Pros. iii. 411. 323, 324. The date is given as 116 a.d., in CIL cit., and as
no in HJ 640 ; but see CIL vi. 222, 691.