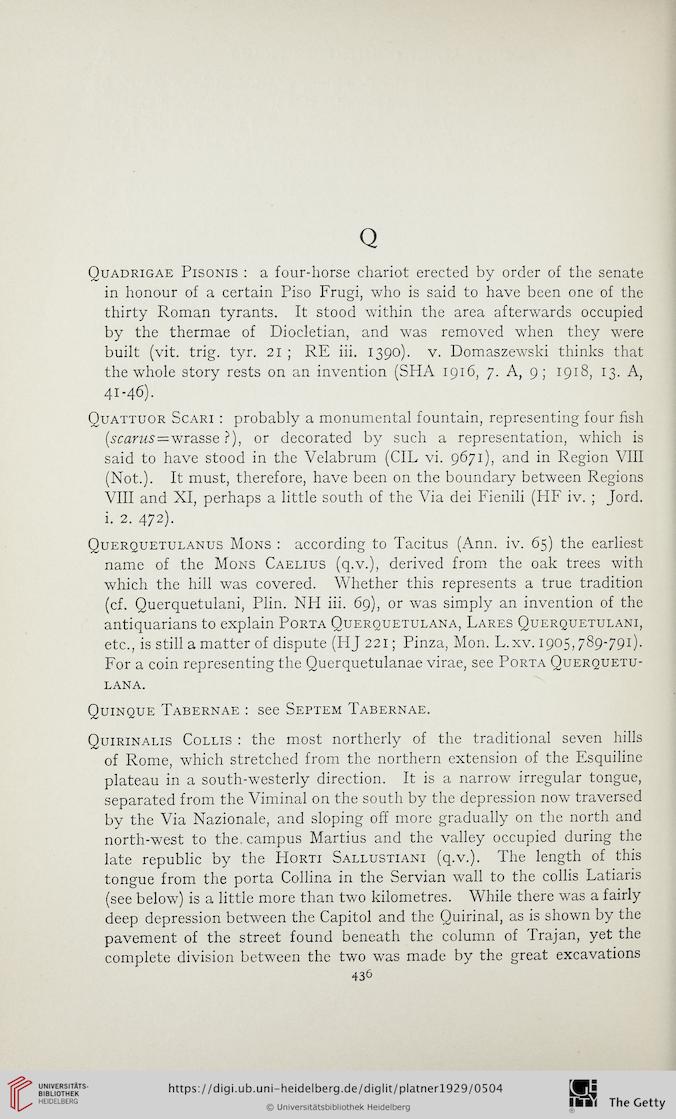 Scroll
OCR fulltext
Information about OCR text
Q
Quadrigae Pisonis : a four-horse chariot erected by order of the senate
in honour of a certain Piso Frugi, who is said to have been one of the
thirty Roman tyrants. It stood within the area afterwards occupied
by the thermae of Diocletian, and was removed when they were
built (vit. trig. tyr. 21 ; RE iii. 1390). v. Domaszewski thinks that
the whole story rests on an invention (SHA 1916, 7. A, 9; 1918, 13. A,
41-46).
Quattuor Scari : probably a monumental fountain, representing four fish
(scarus = wrasse ?), or decorated by such a representation, which is
said to have stood in the Velabrum (CIL vi. 9671), and in Region VIII
(Not.). It must, therefore, have been on the boundary between Regions
VIII and XI, perhaps a little south of the Via dei Fienili (HF iv. ; Jord,
i. 2. 472).
Querquetulanus Mons : according to Tacitus (Ann. iv. 65) the earliest
name of the Mons Caelius (q.v.), derived from the oak trees with
which the hill was covered. Whether this represents a true tradition
(cf. Querquetulani, Plin. NH iii. 69), or was simply an invention of the
antiquarians to explain Porta Querquetulana, Lares Querquetulani,
etc., is still a matter of dispute (HJ 221; Pinza, Mon. L.xv. 1905,789-791).
For a coin representing the Querquetulanae virae, see Porta Querquetu-
lana.
Quinque Tabernae : see Septem Tabernae.
Quirinalis Collis : the most northerly of the traditional seven hills
of Rome, which stretched from the northern extension of the Esquiline
plateau in a south-westerly direction. It is a narrow irregular tongue,
separated from the Viminal on the south by the depression now traversed
by the Via Nazionale, and sloping off more gradually on the north and
north-west to the. campus Martius and the valley occupied during the
late republic by the Horti Sallustiani (q.v.). The length of this
tongue from the porta Collina in the Servian wall to the collis Latiaris
(see below) is a little more than two kilometres. While there was a fairly
deep depression between the Capitol and the Quirinal, as is shown by the
pavement of the street found beneath the column of Trajan, yet the
complete division between the two was made by the great excavations
436