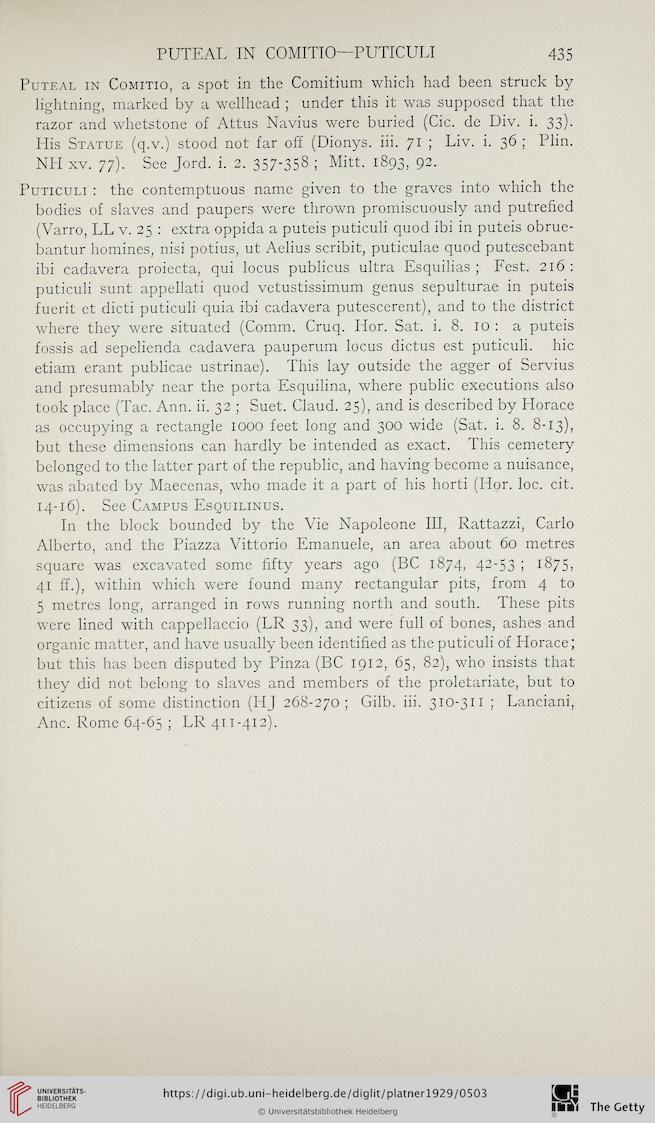 Puteal in Comitio, a spot in the Comitium which had been struck by
lightning, marked by a wellhead ; under this it was supposed that the
razor and whetstone of Attus Navius were buried (Cic. de Div. i. 33).
His Statue (q.v.) stood not far off (Dionys. iii. 71 ; Liv. i. 36 ; Plin.
NH xv. 77). See Jord. i. 2. 357-358 ; Mitt. 1893, 92.
Puticuli : the contemptuous name given to the graves into which the
bodies of slaves and paupers were thrown promiscuously and putrefied
(Varro, LL v. 25 : extra oppida a puteis puticuli quod ibi in puteis obrue-
bantur homines, nisi potius, ut Aelius scribit, puticulae quod putescebant
ibi cadavera proiecta, qui locus publicus ultra Esquilias ; Fest. 216 :
puticuli sunt appellati quod vetustissimum genus sepulturae in puteis
fuerit et dicti puticuli quia ibi cadavera putescerent), and to the district
where they were situated (Comm. Cruq. Hor. Sat. i. 8. IO : a puteis
fossis ad sepelienda cadavera pauperum locus dictus est puticuli. hie
etiam erant publicae ustrinae). This lay outside the agger of Servius
and presumably near the porta Esquilina, where public executions also
took place (Tac. Ann. ii. 32 ; Suet. Claud. 25), and is described by Horace
as occupying a rectangle 1000 feet long and 300 wide (Sat. i. 8. 8-13),
but these dimensions can hardly be intended as exact. This cemetery
belonged to the latter part of the republic, and having become a nuisance,
was abated by Maecenas, who made it a part of his horti (Hor. loc. cit.
14-16). See Campus Esquilinus.
In the block bounded by the Vie Napoleone III, Rattazzi, Carlo
Alberto, and the Piazza Vittorio Emanuele, an area about 60 metres
square was excavated some fifty years ago (BC 1874, 42-53 ; 1875,
41 ff.), within which were found many rectangular pits, from 4 to
5 metres long, arranged in rows running north and south. These pits
were lined with cappellaccio (LR 33), and were full of bones, ashes and
organic matter, and have usually been identified as the puticuli of Horace;
but this has been disputed by Pinza (BC 1912, 65, 82), who insists that
they did not belong to slaves and members of the proletariate, but to
citizens of some distinction (HJ 268-270; Gilb. iii. 310-311 ; Lanciani,
Anc. Rome 64-65 ; LR411-412).