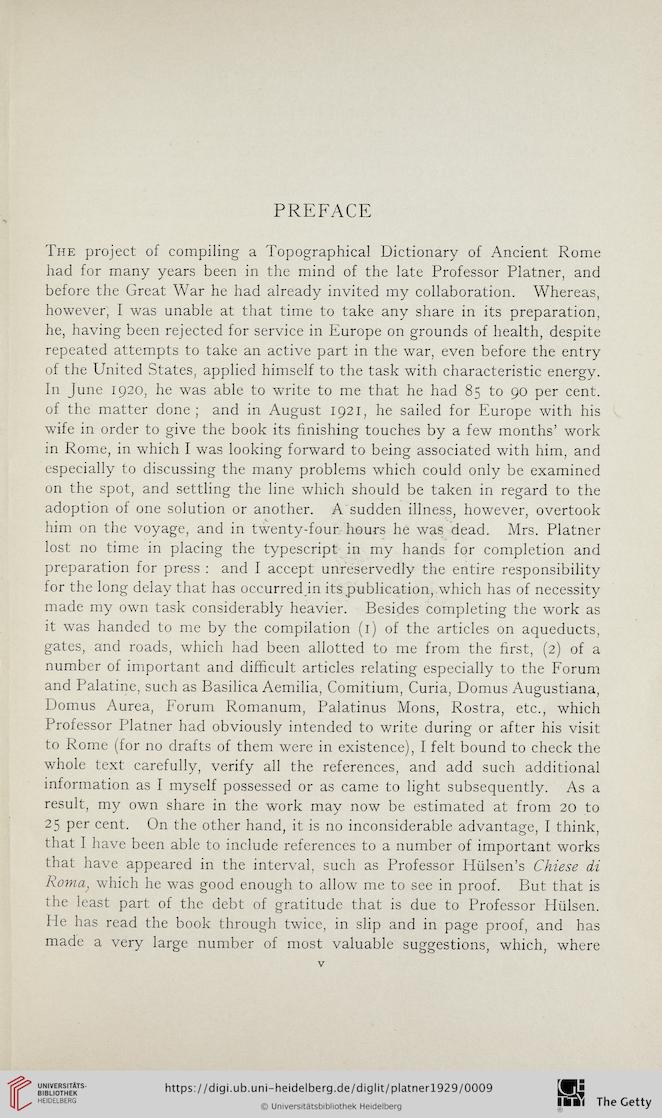 The project of compiling a Topographical Dictionary of Ancient Rome
had for many years been in the mind of the late Professor Plainer, and
before the Great War he had already invited my collaboration. Whereas,
however, I was unable at that time to take any share in its preparation,
he, having been rejected for service in Europe on grounds of health, despite
repeated attempts to take an active part in the war, even before the entry
of the United States, applied himself to the task with characteristic energy.
In June 1920, he was able to write to me that he had 85 to 90 per cent,
of the matter done ; and in August 1921, he sailed for Europe with his
wife in order to give the book its finishing touches by a few months’ work
in Rome, in which I was looking forward to being associated with him, and
especially to discussing the many problems which could only be examined
on the spot, and settling the line which should be taken in regard to the
adoption of one solution or another. A sudden illness, however, overtook
him on the voyage, and in twenty-four hours he was dead. Mrs. Platner
lost no time in placing the typescript in my hands for completion and
preparation for press : and I accept unreservedly the entire responsibility
for the long delay that has occurred,in its publication, which has of necessity
made my own task considerably heavier. Besides completing the work as
it was handed to me by the compilation (1) of the articles on aqueducts,
gates, and roads, which had been allotted to me from the first, (2) of a
number of important and difficult articles relating especially to the Forum
and Palatine, such as Basilica Aemilia, Comitium, Curia, Domus Augustiana,
Domus Aurea, Forum Romanum, Palatinus Mons, Rostra, etc., which
Professor Platner had obviously intended to write during or after his visit
to Rome (for no drafts of them were in existence), I felt bound to check the
whole text carefully, verify all the references, and add such additional
information as I myself possessed or as came to light subsequently. As a
result, my own share in the work may now be estimated at from 20 to
25 per cent. On the other hand, it is no inconsiderable advantage, I think,
that I have been able to include references to a number of important works
that have appeared in the interval, such as Professor Hulsen’s Chiese di
Roma, which he was good enough to allow me to see in proof. But that is
the least part of the debt of gratitude that is due to Professor Hulsen.
He has read the book through twice, in slip and in page proof, and has
made a very large number of most valuable suggestions, which, where