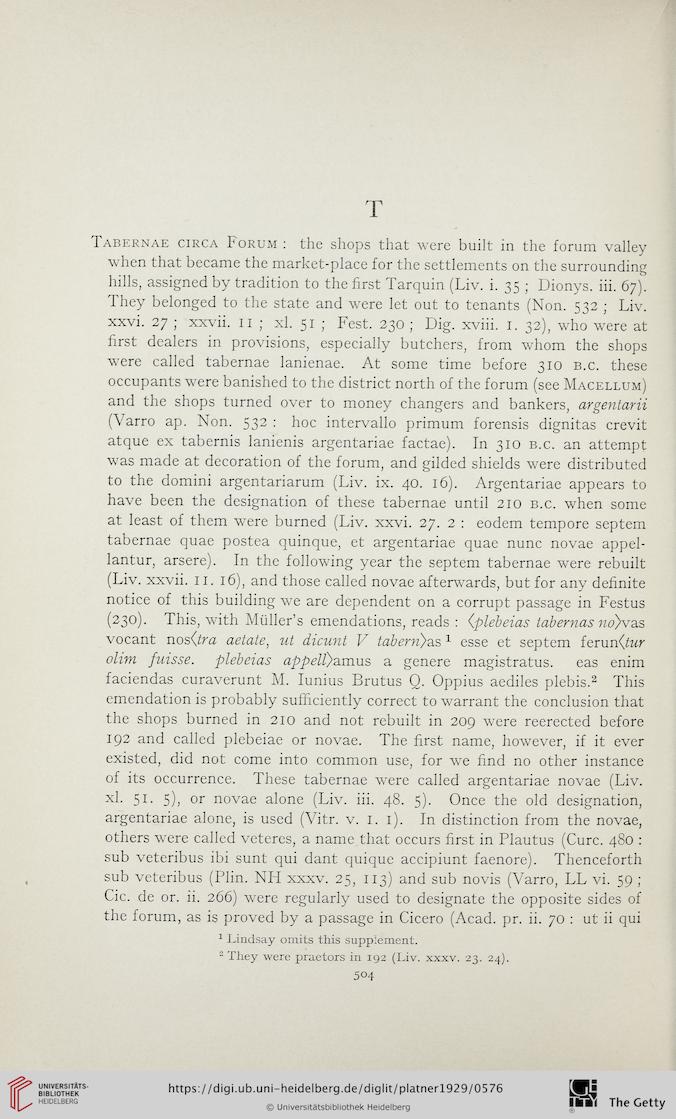 Tabernae circa Forum : the shops that were built in the forum valley
when that became the market-place for the settlements on the surrounding
hills, assigned by tradition to the first Tarquin (Liv. i. 35; Dionys. iii. 67).
They belonged to the state and were let out to tenants (Non. 532 ; Liv.
xxvi. 27 ; xxvii. II ; xl. 51 ; Fest. 230 ; Dig. xviii. I. 32), who were at
first dealers in provisions, especially butchers, from whom the shops
were called tabernae lanienae. At some time before 310 b.c. these
occupants were banished to the district north of the forum (see Macellum)
and the shops turned over to money changers and bankers, argentarii
(Varro ap. Non. 532 : hoc intervallo primum forensis dignitas crevit
atque ex tabernis lanienis argentariae factae). In 310 b.c. an attempt
was made at decoration of the forum, and gilded shields were distributed
to the domini argentariarum (Liv. ix. 40. 16). Argentariae appears to
have been the designation of these tabernae until 210 b.c. when some
at least of them were burned (Liv. xxvi. 27. 2 : eodem tempore septem
tabernae quae postea quinque, et argentariae quae nunc novae appel-
lantur, arsere). In the following year the septem tabernae were rebuilt
(Liv. xxvii. II. 16), and those called novae afterwards, but for any definite
notice of this building we are dependent on a corrupt passage in Festus
(230). This, with Muller’s emendations, reads : (plebeias tabernas no)vas
vocant nostra aetate, ut dicunt V tabern)as 1 esse et septem ferun(iur
olim fwisse. plebeias appell)amus a genere magistratus. eas enim
faciendas curaverunt M. Iunius Brutus Q. Oppius aediles plebis.2 This
emendation is probably sufficiently correct to warrant the conclusion that
the shops burned in 210 and not rebuilt in 209 were reerected before
192 and called plebeiae or novae. The first name, however, if it ever
existed, did not come into common use, for we find no other instance
of its occurrence. These tabernae were called argentariae novae (Liv.
xl. 51. 5), or novae alone (Liv. iii. 48. 5). Once the old designation,
argentariae alone, is used (Vitr. v. 1. 1). In distinction from the novae,
others were called veteres, a name that occurs first in Plautus (Cure. 480 :
sub veteribus ibi sunt qui dant quique accipiunt faenore). Thenceforth
sub veteribus (Plin. NH xxxv. 25, 113) and sub novis (Varro, LL vi. 59 ;
Cic. de or. ii. 266) were regularly used to designate the opposite sides of
the forum, as is proved by a passage in Cicero (Acad. pr. ii. 70 : ut ii qui
1 Lindsay omits this supplement.
2 They were praetors in 192 (Liv. xxxv. 23. 24).
504