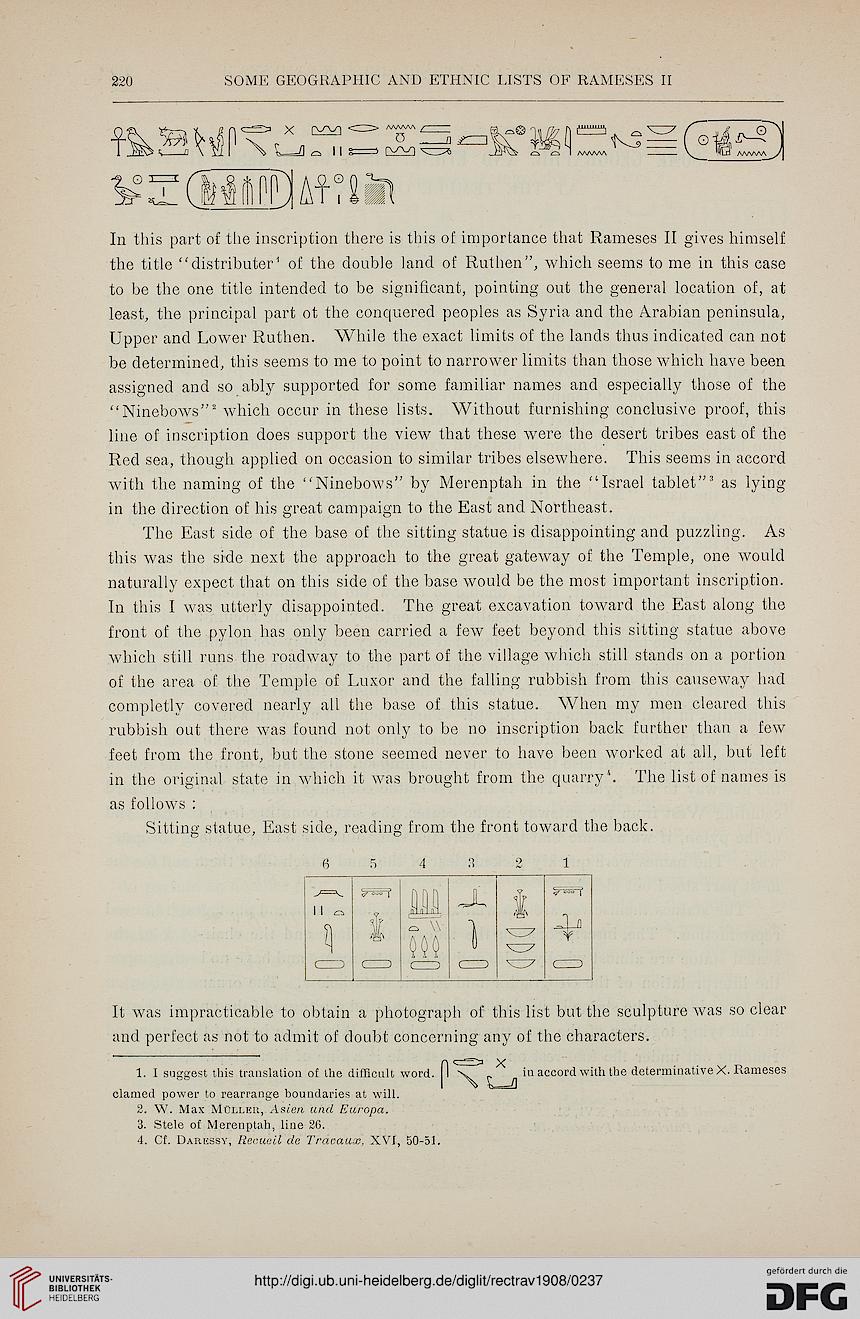 SOME GEOGRAPHIC AND ETHNIC LISTS OF RAMESES II

In this part of the inscription there is tins of importance that Rameses II gives himself
the title "distributer1 of the double land of Ruthen", which seems to me in this case
to be the one title intended to be significant, pointing out the gênerai location of, at
least, the principal part ot the conquered peoples as Syria and the Arabian peninsula,
Upper and Lower Ruthen. While the exact limits of the lands thus indicated can not
be determined, this seems to me to point to narrower limits than those which have been
assignecl and so ably supported for some familiar names and especially those of the
"Ninebows"2 which occur in thèse lists. Without furnishing conclusive proof, this
line of inscription does support the view that thèse were the désert tribes east of the
Red sea, though applied on occasion to similar tribes elsewhere. This seems in accord
with the naming of the "Ninebows" by Merenptah in the "Israël tablet"3 as lying
in the direction of his great campaign to the East and Northeast.

The East side of the base of the sitting statue is disappointing and puzzling. As
this was the sicle next the approach to the great gateway of the Temple, one would
naturally expect that on this side of the base would be the most important inscription.
In this I was utterly clisappointed. The great excavation towarcl the East along the
front of the pylon has only been carried a few feet beyond this sitting statue above
which still runs the roaclway to the part of the village which still stands on a portion
of the area of the Temple of Luxor and the falling rubbish from this causeway had
completly covered nearly ail the base of this statue. When my men cleared tins
rubbish out there was found not only to be no inscription back further than a few
feet from the front, but the stone seemed never to have been worked at ail, but left
in the original state in which it was brought from the quarry ". The list of names is
as follows :

Sitting statue, East side, reading from the front toward the back.

It was impracticable to obtain a photograph of this list but the sculpture was so clear
and perfect as not to admit of doubt concerning any of the characters.

1. I suggest this translation of Ihe difficiilt word. \ „ in accord with the determinative X. Rameses

clamed power to rearrange boundaries at will.